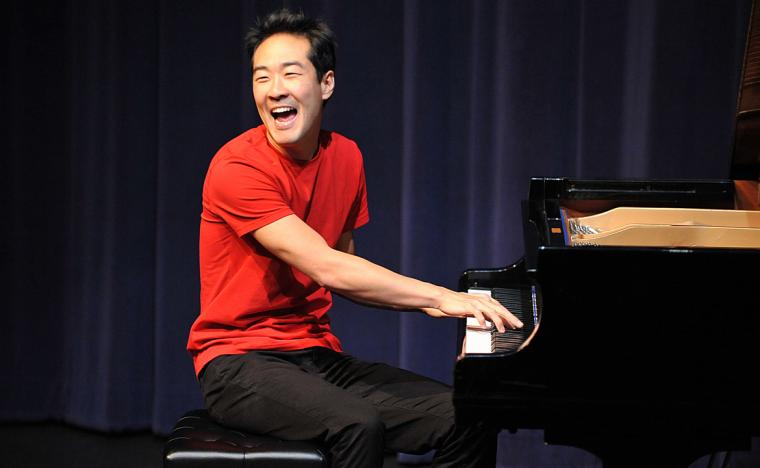 With its guest artists, at least through January, performing solely online in the University of Dubuque's Live(stream) with Heritage Center series, acclaimed classical pianist Alpin Hong will demonstrate his gifts virtually on October 22, delivering an exclusive, live showcase performance and engaging in a question-and-answer session with Heritage Center staffers.

Described by the New York Times as “a pianistic firebrand,” Hong made his orchestral debut with the Kalamazoo Symphony at the age of 10. He moved to Los Angeles soon afterward and garnered competition victories at a young age with wins at the 1989 Stravinsky Piano Competition, the 1993 SYMF Competition, and the 1994 Los Angeles Spotlight Awards Competition. Hong completed his Master's degree at The Juilliard School, and during two whirlwind American tours and performances across the globe, the pianist earned a reputation as a modern-day Pied Piper. Opening the ears, eyes, and imaginations of hundreds of thousands of Americans, his combination of stunning technique, emotional range, and rare humor continues to bring audiences young and old to their feet. The Santa Barbara News Press described Hong as “a tour de force,” and the McGraw-Hill Companies honored him in September 2005 with the $10,000 Robert Sherman Award for Music Education and Community Outreach.

Highlights of Hong's recent performances include his debut at the Gilmore International Keyboard Festival in Michigan, performing Prokofiev's Piano Concerto No. 3 with the Battle Creek Symphony; residencies presented by the University of Iowa's Hancher Auditorium and by the La Jolla Music Society as part of its well-known Discovery Series; and his Chicago recital debut on the Dame Myra Hess Series broadcast live on WFMT-FM. Hong's uniquely humorous and visionary approach to arts education led to master classes at the University of Utah, San Jose State University, and the College of DuPage in Chicago, and his performances at festivals such as the Usdan Center for the Creative and Performing Arts left a new generation of young artists inspired and cheering. The New York Times also lauded his “crystalline energy,” “clear and persuasive ideas,” and “remarkable breadth of coloration” in a review of his standing-room-only recital debut at Carnegie Hall's Weill Recital Hall, the result of his winning First Prize in the 2001 Concert Artists Guild International Competition.

The Live(stream) with Heritage Center concert with Alpin Hong takes place at 6:30 p.m. on October 22, and while the 45-minute presentation is free, donations to the Friends of Heritage Center are strongly encouraged. Hong's concert can be viewed at @UDBQMedia on YouTube, and more information on the evening presentation is available by calling (563)589-3432 or visiting Dbq.edu/HeritageCenter.