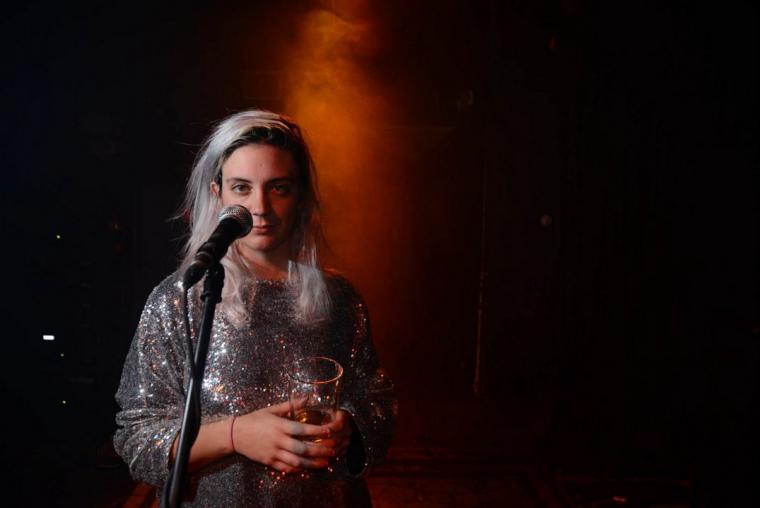 “I want to barf on you,” sings Arin Eaton on “Sad,” the most stripped-down song on the 2016 Karen Meat EP She’s Drunk Like the Rest of Us. “I hate what you’ve put me through.”

While vomit is nowhere near unexpected from a Karen Meat & the Computer track (see puking references in songs such as “I Wrote You a Card” and “Pizza & Beer”), Eaton is coming from a more-personal place on this solo EP.

The Des Moines-based Eaton will perform at Rozz-Tox on February 2 as Karen Meat, the solo moniker distinct from her four-piece pop band Karen Meat & the Computer. She’ll be joined by Dana T, the Iowa City-based musician who produced and arranged She’s Drunk Like the Rest of Us.

After the members of Karen Meat & the Computer burnt out touring behind the 2016 EP On the Couch, Eaton spent a few summer days writing about what she called a “weird year” personally.

“I lived in a basement, and I locked myself in there for three days and wrote some songs on a synthesizer about personal things going on,” Eaton said in a phone interview.

While she wrote all of the songs herself instead of collaborating with her Computer bandmates, the songs retain the outfit’s lyrical simplicity. The bluntness of Eaton’s words don’t take away from the story she’s telling, expressing the shock of humiliation – especially in the EP’s lead track, “Drone.”

“Remember a few hours ago when you broke up with me in your sister’s front yard in front of family?” chants Eaton in a sing-songy fashion. “Oh my god. That was embarrassing.”

Dana T’s production embellishes “Drone” with Gameboy-esque noises, with electronic notes bouncing all over the place in the background, dissolving into unaltered piano.

This story of the dissolution of a relationship is often filled with unhappiness, whether Eaton sings about trying to destroy her hair or about not eating or about drinking every day. In the EP’s standout track “A Is for Asshole,” Eaton’s insecurity extends to her music.

“I’m tired of using,” she sings. “I’m tired of abusing this f---ing A chord that I cannot stop playing. Oh my God. Is this the same Karen Meat song again?”

But the song sounds anything but dark, with a peppy electronic backing track that could be soundtracking the intro to a movie from the ’80s.

The album’s style is all over the place, ranging from synth pop to early rock-and-roll in “Doowop” to country-folk vibes in closing track “Sad.” But it always effectively expresses what Eaton was feeling. “It’s solely me and my thoughts, and sometimes those are chaotic,” she said.

Dana T’s production and arrangement create a crystal-clear sound, unlike the tinny lo-fi aesthetic of Karen Meat & the Computer. The band’s signature omnichord is traded for a wider range of instrumentation.

But the group’s spirit is still very much alive on She’s Drunk Like the Rest of Us. Eaton said the band tries “to let people know that we’re serious, but also it doesn’t matter. Life’s short. You gotta have fun.”

She’s Drunk Like the Rest of Us excels in applying that philosophy to more-serious subject matter. The sounds and attitude on most of the EP keep it deceptively light, but the emotional impact isn’t lost, especially in the final moments.