Marc Zyla, Director of Education and Community Engagement and principal horn musician for the Quad City Symphony Orchestra (QCSO), discusses the organization's operations during this period of social distancing. We spoke on Friday, April 3.

Like every institution these days, we're trying to find ways to connect with our audiences and connect with our communities-at-large. And we have to think of ways to do this while the QCSO staff are separated from one another. Currently, all of our Illinois staff are at home, and the Iowa staff is just going in maybe one day a week, so there are a lot of limitations in what the organization can do during this time.

So we kind of tossed around the idea of looking at this as an opportunity, since we don't have events, to spend a little time answering these more basic questions that all of us had at one point during our lives but maybe haven't thought about for a while. “What exactly is an orchestra?” “How do the musicians do what they do on stage?” And as we get further into the Music Minutes series [available on the QCSO's Facebook page], we're going to get further and deeper into a broad base of musical concepts. So that was kind of our initial idea: Let's do something while everyone's separated that can come from different voices within the Quad City Symphony family.

The way that we're doing it is really quite simple. Most people have smart phones these days, so we're just recording ourselves using our cell phones. I like to work with a teleprompter (laughs), so I have a teleprompter app, and others have done things differently. But it's generally just setting up your laptop or your cell phone and recording a couple-minute message, and then we send it to our digital-media assistant Nick Probst and he puts the videos together so they kind of look uniform even though they're being shot all over the place. The first two episodes were introduced by me, but now we're going to make our way through various different parts of our organization, and the Music Minutes are going to keep coming twice a week [on Tuesdays and Thursdays].

I grew up around orchestras; my dad is second horn in the West Virginia Symphony. So as soon as I was able to sit still long enough – or maybe before I was able to sit still long enough – I was going to concerts and rehearsals just by way of my parents not wanting to pay for a babysitter. (Laughs.) And my experience has been that everybody is so different and quirky and entertaining. I understand that some people think classical music is kind of shut off and lofty and all that stuff. But that's just never been my experience. So the thing I love about these types of efforts is it gives us an opportunity to show what I know to be true: that there are a lot of really wonderful people on that stage, and this is an opportunity to hear us actually talk, you know? (Laughs.) Most of the time, my job is to put a French horn to my lips and not necessarily talk about what I do.

The Quad City Symphony prides itself on being an organization that has something for everyone. It's a one-stop-shop, it seems, for experiences in classical music. So it was really important to the organization to continue to connect with our students even during this time when having gatherings of 10 or more are not permitted. So we're using Zoom like a lot of other organizations are, and our youth-ensemble team led by our music director Ernesto Estigarribia has done a really great job with using this time, again, as an opportunity to dig deeper into things that we just might not have the time to do within a normal rehearsal schedule.

The students log in via Zoom meetings, and in one of them they were talking about different musical terms, because a lot of classical music uses terms in foreign languages. It's a good idea for musicians to have some experience with being able to identify what language certain words are in, and being able to do some translation of musical terms in different languages. So this is one of those times where they're making wonderful lemonade out of these lemons. And still being able to see one another another and connect on a weekly basis has, I think, been proven to be successful, so for the rest of the month, students are going to continue to meet in that fashion.

It's funny because, you know, kids are kids. (Laughs.) Everybody enjoys being able to get together, and one of the things that makes me laugh is that some of them are a little bit more advanced with messing around with different virtual backgrounds and that kind of stuff. It's always funny to see the tongue-in-cheek-ness of high-school students and middle-school students, especially when you give them technology. (Laughs.) 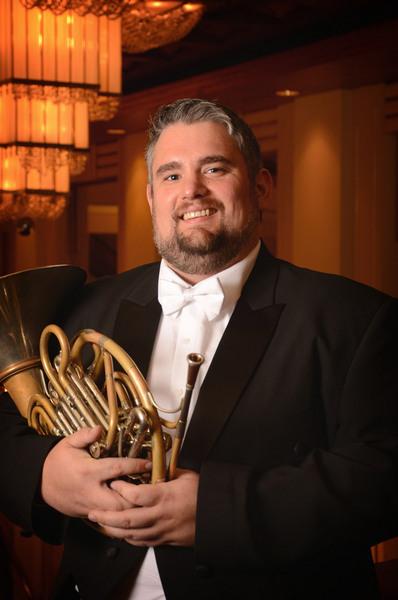 Right now, we're working out with our musicians on ways that we can share some more full-length performances for the next few months while we're not playing in the concert hall together. You know, the organization has really dug in on the creation of digital media, and so that has gotten into the concert hall, in a sense. We've been recording our concerts forever, but we've been video-recording our concerts in a big way over the past five years. So we're gonna be putting together some media in that vein that will be released over the time of our separation.

We're actually been creating a ton of media just in general. So I hope that people really deep-dive into these Music Minutes and other things – our Facebook video archive and YouTube videos – because we've got really great stuff. Like a couple years ago, we did a piece by Hector Berlioz called Symphonie fantastique that we did almost like a graphic-novel video series with local illustrator Jason Platt. There's just a bunch of stuff out there, and hopefully people take this time to kind of explore and get to know us a little bit more on that front.

How to Support the QCSO … and Each Other

The general public can always help us by supporting us financially. But also, I think one thing that's going to be really needed is for us to start getting excited about what life is gonna be like when we can get outside of our houses again. The Quad City Symphony has an awesome season coming up next year, and we hope that everybody comes out and sees it. And we hope that the people who have heard us recently, who are really excited about the things we're doing at the Adler Theatre and [Augustana College's] Centennial Hall, will take some time to talk with their friends, share things online, share our videos, and encourage people to add this to the palette that is their social lives.

For me, the way I think I've tried to live my life, is to have a broad array of activities that I'm into. That's what's so great about the Quad Cities, and that's what's so great about the Quad City Symphony, and I think that our breadth of offerings reflects the breadth of offerings that the Quad Cities has. I'm personally just super-excited to get out of the house. (Laughs.) And I cannot wait to get back to living that Quad City life that all of us have grown accustomed to.

Speaking as an artist, I think people need us right now. I think that we're in the first few weeks of something that's gonna be going on for a little while. So my words of advice or encouragement are: This will all end, and we need to have a sunny disposition and look forward to when that day is, and what we're gonna do on day one when we're able to go out.

The other thing is that this is really an opportunity, I think, for us to try new things. So if there's an artistic project that you've kind of been putting on the back burner because of other things – if you've felt like painting, if you've felt like writing poetry, if you've felt like composing music – even if you don't share it with the world, now is your time to explore that side of yourself. And maybe at the end of this we'll have even more creative folks around, which will make our world even better.