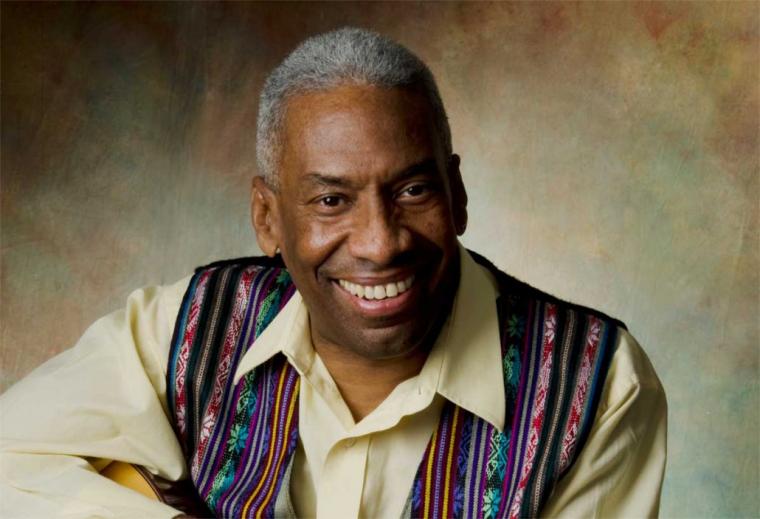 A consummate musician and storyteller enjoys an area stay as the latest guest in Quad City Arts' Visiting Artist series, with area audiences invited to two March 6 engagements with singer/guitarist Reggie Harris, a master entertainer and educator as comfortable in folk-music performance as he is sharing stories of the Underground Railroad and the modern Civil Rights Movement.

Known for over 40 years as one half of the eminent folk duo Kim & Reggie Harris, Quad City Arts' most recent Visiting Artist is a well-traveled performer, lecturer, and cultural ambassador who has earned wide acclaim and respect from peers and audiences throughout the United States, Canada, and Europe. His music combines spirituals, roots, historic inspiration, and moving original material, often in the themes of unity and social justice, and Harris averages 250 touring dates per year, having spent four decades in high demand at arts centers, schools, universities, and festivals. A songwriter of great depth and insight, Harris writes from a personal but accessible place that reveals his deep sense of humanity and uniquely positive worldview, and as a trailblazer who performs for audiences of all ages, his effervescently humorous and hopeful presence has led fans to label him “The Ambassador of Joy, Hope, and Freedom.”

In addition to his musical talents recently showcased in 2018's Ready to Go – the artist's first solo album after nearly 40 years of performing – Harris has a strong passion for education, and has been affiliated with the John F Kennedy Center’s Partners in Education program as a teaching artist for more than three decades. Using performances, classroom modeling, and experience-based workshops, he has expanded the knowledge base in the fields of music, history, and the social sciences through groundbreaking writing, research, fieldwork, and recordings, and Harris' significant work with students and teachers has aided in the expansion and enhancement of curriculum standards at all grade levels. Harris has helped teachers, students, and community leaders become more effective agents and advocates of student-based learning, and the artist's knowledge and understanding of arts integration goals and techniques makes him an effective resource for creating synergy and understanding for students and educators. Lectures and teacher in-service presentations developed in collaboration with the Kennedy Center Partners in Education program are part of Harris' ongoing outreach, and the artist stands as one of the premier interpreters of the use of music in historical movements for social change.

Reggie Harris' full-length public concert will be held at Moline's Butterworth Center on March 6 at 7 p.m., and earlier that day, an abbreviated version of his performance will take place at the Moline Public Library at noon. Both events are free, and more information on Harris' area residency and the Visiting Artist series is available by calling (309)793-1213 or visiting QuadCityArts.com.