Molchat Doma & the Shadow of the '80s in Modern “Soviet” Pop 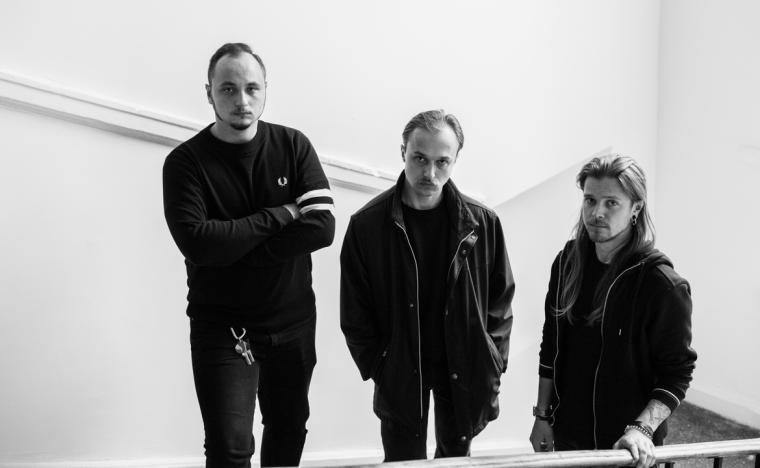 Belarusian synthwave unit Molchat Doma has taken a series of interesting turns in their ascent to their current status as the reigning kings of their would-be niche strain of dour, '80s-inflected goth-pop.

To say that the algorithms and the viral sharing practices inherent to streaming services and apps such as TikTok and YouTube have been kind to them would be a severe understatement – and yet, the digital serendipity that brought them to prominence probably shouldn’t be seen as some kind of fluke or unfairly gained boon. Their music deftly channels touchstones of foreboding yet catchy '80s music, and presents them in such a way that the borders between decades and relatively defunct styles of pop composition blur as listeners submit themselves to the band’s willfully enigmatic mythos.

Molchat Doma’s first two albums, 2017’s С крыш наших домов [From the Roofs of our Houses] and 2018’s Этажи [Floors], initially came to prominence in the west thanks to unapproved uploads to YouTube from users in the U.S. and Europe. These full album streams spent years popping into people’s autoplay feeds on the site whenever anyone queued up a video of anything remotely “'80s pop'-related. Though the information about the albums’ origins was often clearly presented in the information attached to their uploads, many listeners who encountered their music imagined that they had happened upon some lost contemporary of prototypical U.K. goth pop staples such as Joy Division, Bauhaus, and Depeche Mode. As these uploads gained millions of views, people wondered: Had Molchat Doma been toiling in their own insular scene for decades, and simply hadn’t crossed over to the west because of a communication breakdown between former Soviet states and the rest of the world?

In truth, the band formed in Minsk, Belarus, in 2017. To think that the band’s phenomenal success and widespread recognition, especially among plugged-in teenage listeners, could be generated within the space of three years seems impossible. But of course, the Internet and its arc of international dissemination works in mysterious ways. Within the last six months, the band’s song “Судно (Борис Рыжий)” from their album Этажи, which currently sits at a cool 13 million views on YouTube, has become a go-to choice to soundtrack users’ uploads to the teen-focused music/video app TikTok. These videos encompass anything from quotidian snapshots of the dreary lives of suburban kids, to high-energy dance routines, to posts that explicitly fetishize the grungy, industrial aesthetics of '80s Soviet Russia, as depicted in the brutalist architectural structures that have taken on iconic status in the band’s artwork. Yes, somehow, Molchat Doma has made the bleak imagery of Soviet Russia into some kind of faux-nostalgic trending topic for teens in America to pine over. “If only I could visit Russia, and take a selfie in front of the Molchat Duma building.” 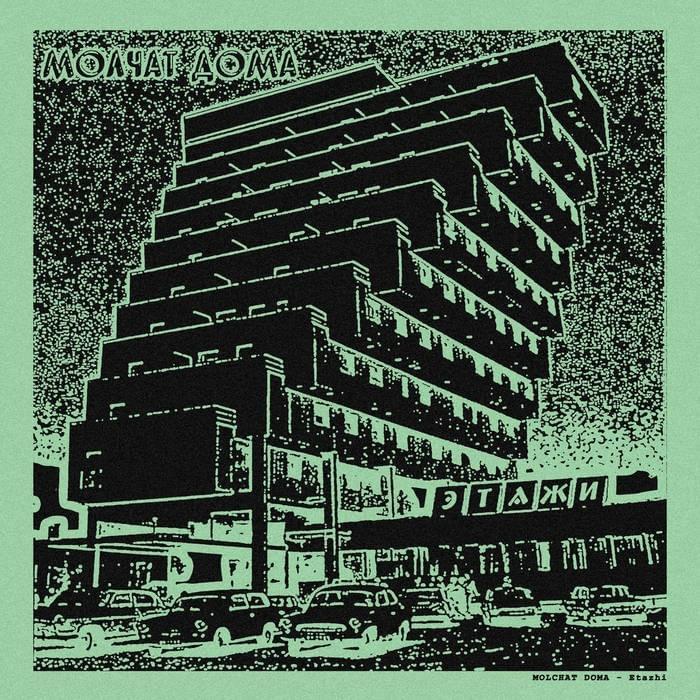 Though that analysis might seem tinged with some kind of bitterness, it really testifies to the improbable and ultimately fascinating avenues that music has in 2020 to reach a wider audience. While older heads might hear Molchat Doma and ask “Why listen to this when you could listen to ____? [insert any number of '80s staples],” it makes perfect sense that teens lock into the band’s music. Though it channels acts of the past, the band’s music doesn’t feel like some relic that their weird uncle was into back in the day for any teenage listener that happens upon it. To them, it’s another “new” pop style to leap into and to claim as their own – to proudly proclaim, “I was there when that was first taking off.”

This year, Molchat Doma signed to Brooklyn’s Sacred Bones Records, a dominant exponent of dark, industrial-tinged sounds that has released LPs by widely acclaimed artists such as Zola Jesus, Marissa Nadler, Jenny Hval, and even the musical output of legendary directors David Lynch and John Carpenter. The band’s most recent effort, Monument, landed in early November. Though Sacred Bones has reissued physical editions of the band’s previous albums (which have since sold out across many pressings), Monument serves as the first collection of new music that Molchat Doma has released from within the context of their new status as a certified TikTok-trending band.

So, saddled with the associations of their viral fame, what do we make of Monument? Half of the album lands more squarely in the realm of post-punk rock bands such as Joy Division, Orange Juice, or Siouxsie and the Banshees. The songs in this style present the band’s spreads of brittle guitar parts, steady drum machine patterns, and melodic basslines in a distant, reverb-heavy production style, at a level of overall volume and intensity far closer to the now tinny standards of '80s classics than anything mastered to the ear-busting loudness of today’s radio pop. Over the band’s grooving, yet melancholic backdrops, singer Egor Shkutko intones vocal lines that vary from vampiric moans to more active melodies – all delivered in a somber, low-end register.

The other half of the album skirts closer to synth-laden classics by bands including New Order and Depeche Mode – acts that shifted the bile and passion of punk into the realm of the dance floor, while still presenting as a band under the wide umbrella of the “rock” tradition (see: Depeche Mode’s admittance to the Rock and Roll Hall of Fame this year). The more synth heavy tracks on Monument make the most of rapid-fire electronic bass lines that morph into elastic arpeggios and wrap around four-on-the-floor kick drum patterns. Like New Order, especially, the presence of both the bass guitar and the synth bass in the forefront of the arrangements in Molchat Doma’s music provides its with an instantly appealing, danceable factor – fit, perhaps, for a teen in their bedroom filming themself working through whatever dance is currently trending on TikTok. 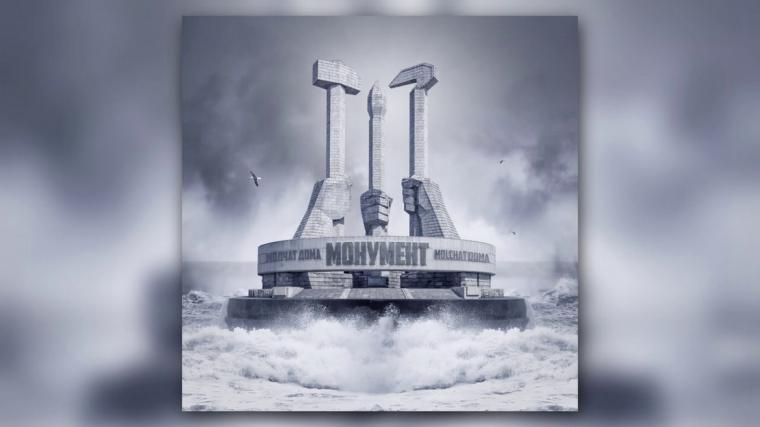 To talk about Molchat Doma’s music in terms of virality and sharing on apps generates some major cognitive dissonance, and yet the band can no longer escape such a framework. On its own, the music isn’t necessarily the type of fare that would make “serious music listeners” (blegh) sit up and take notice – but in context, saddled with the talking points that surround them, it has already taken on a level of mythologization that begs the question: what about this music resonates with people, especially young people, on such a massive scale? “Is the whole thing a fluke? Or is the music just that good, and I’m missing something?” These questions have no answers. Why does something catch on? Why did hundreds of thousands of TikTok users select Molchat Doma to soundtrack their videos? They liked it, or they saw someone they admire using it, so they went for it. That’s the long and short of it.

A brief survey of other contemporary pop music from Russia and its satellite states reveals a similar gravitation toward '80s pop, though each act traces its own path through decades-old signifiers. The ornate, progressive songs that appear on Kate NV’s album Room for the Moon, which dropped in mid-2020 on Brooklyn experimental label RVNG, dispense almost entirely with the tropes of post-punk and zero in on a strain of '80s music connected to Russia from another direction: Japan. Kate NV makes complex, drama-infused pop that lands somewhere in the wheelhouse of Yellow Magic Orchestra member and electronic pop kingpin Haruomi Hosono, especially his production for pop idols such as Miharu Koshi, or the work of recently widely rediscovered band Mariah. With these artists, Kate NV’s music shares a focus on mallet-like percussion tones and staccato synth arpeggios that sketch out complex, stuttering melodies – all planted over tom-heavy percussion patterns and drifts of whirring keyboard.

Moscow-based band Тальник (Talnik) released an album in mid-October titled Сипс that splits the difference between the labyrinthine, digital synth parts that appear on Depeche Mode’s Violator and the style of down-tempo, almost trip-hop-esque lounge pop. The band makes the most of their two-singer lineup – one male-presenting, whose vocals melt with yearning into lovely, elliptical melodies, and one femme-presenting, whose wispy style sounds more like something you’d hear draped over a techno or house track. Though some aspects of Talnik’s sound are rooted in the '80s and '90s, Сипс presents a marked contrast to the likes of Molchat Doma. Talnik takes a more combinatory approach to pop arrangement, leaping between styles for each track: the mournful classical strings of the torch song “Антистресс,” the late-night afterparty haze of “Давай прервёмся,” the frenetic, and IDM-like drum programming of “Махаон” all could feasibly be the work of different bands entirely, and yet Talnik lassoes them all together with aplomb.