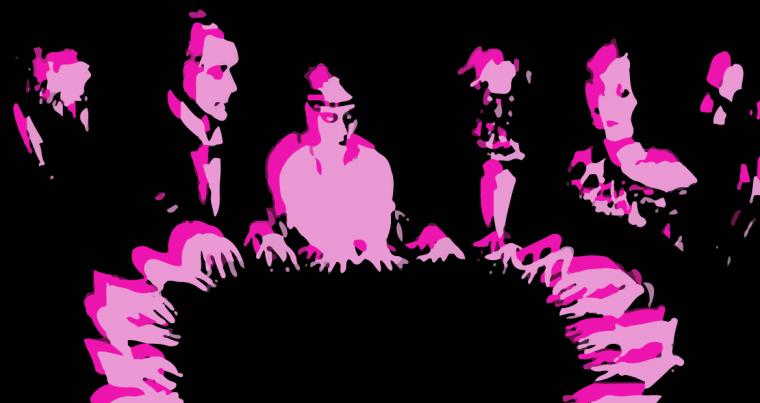 Body Work doesn't have much of a paper trail online yet, and seems like a relatively new project, but its debut video for the song “Now Forget” offers plenty to sink your teeth into. The track itself is a black-light-drenched, weirdo house anthem that finds band members Kelsey Kaufmann and Billy Dimmitt trading off pitch-shifted, monotone vocal lines over a bumping spread of club percussion. Kaufmann’s voice hits us with that classic far-end-of-the-tunnel reverb, like she’s shouting through a megaphone, while Dimmitt steers closer to the role of the vampire frontman holding his hands above his head and proclaiming how tired he is of humanity’s foibles while squinting into the club lights. For a new project, they have their vibe locked down: freaky post-industrial bangers.

The track accrues extra energy in the interludes between verses when the production picks up a bit and the synth elements start colliding together in patches of noise and smeared samples. At one point, there's a moment in which Dimmitt harps on the word “fantasy,” pitched down to a lower octave through effects, and there’s no way this can’t be a reference to Ween’s “Captain Fantasy,” right? The video itself is appropriately bizarre, and shows people who I assume are the two band members gyrating in time-lapse and getting increasingly wet with various liquids that cover their faces, all illuminated in neon lights. In a scene where this type of project usually reaches listeners with maximum anonymity on purpose, and performers seem to take multiple steps away from reality when presenting music to the public, Body Work’s video is refreshing for placing them at the tangible center of the proceedings. They’re right there in front of you dancing in all their freak glory. You have faces connected to the voices.

X Harlow has a handful of tracks on their SoundCloud that constitute the EP Ceiling System, which comes with cryptic, purposefully blocky album art that says “May 24th, 2017/New York City” on it. This leads me to believe that the EP’s recordings represent a live set on that date, but the EP itself hit SoundCloud before that date and sounds more like a studio recording than a live show, so I don’t really know what to believe. Regardless of its origin, Ceiling System captures a strain of Gothic '80s-inspired electronic pop frosted with chilly, almost bratty vocal lines clearly indebted to such English acts as Joy Division, Bauhaus, and Depeche Mode. I’m not sure if the singer of X Harlow is British in origin, but he sure sounds like it here, stretching vowels into accented flourishes as he layers his vocals to the point that it sounds like a gang of singers closely harmonizing.

The first track, “Police State,” crams a lot of input into its four-minute running time, swelling from a dreamy soundscape of delay-heavy synth figures and vocal moans into a mid-section that sounds like some goth industrial take on a barbershop quartet, replete with complementary bits of purely textural voice and almost Beach Boy-esque harmonies. When the song explodes around its two-thirds point with the addition of a four-on-the-floor kick drum and thick torrents of dissonant synth chords, it feels like the satisfying conclusion that X Harlow had been working toward before then, letting us stew around in the darkness before kicking on the floodlights. EP closer “Joey” hits the most overtly euphoric atmosphere of the release with its major key baseline and washes of smeared synth melody that sound out over a busy backdrop of drum programming.

Body Work and X Harlow play locally on February 25 on a bill with local support from Elliott Bay Towers and Aging, admission to the 8p.m. concert is a sliding scale of $5-10, and more information is available by calling (309)200-0978 or visiting RozzTox.com.