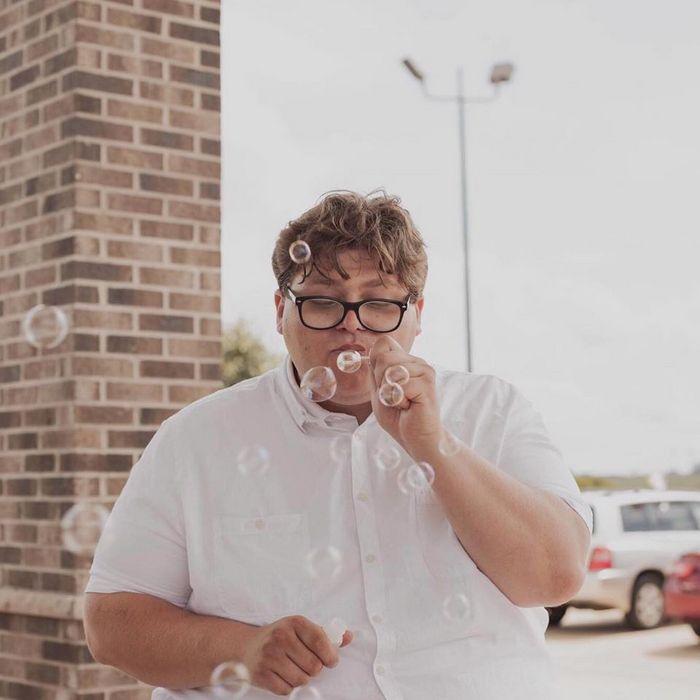 Davenport-based experimental folk artist/singer-songwriter/“???”-core producer Bo Jaywalker has dropped no less than eight individual releases on his Bandcamp page since the last time we checked in with him regarding his Bo Jaywalker LP in April. In typical hodgepodge but nonetheless compelling fashion, Jaywalker’s work on these eight releases ranges from wandering keyboard and organ experiments, to extended sessions that could be considered ambient music, to more legible songwriting in a country-fried, torch-song style.

Clearly versed in the vocabularies and compositional tactics of all of these styles, Jaywalker sometimes decides to populate his extended pieces with combinatory flashes of any number of ideas, colliding a straightforward sung verse with peals of shapeless synth abstraction or stumbling drum machine patterns. The sense of unpredictability and increased rate at which Jaywalker has issued this music adds to the lovely confusion of his catalog, giving the sense that we have only seen the top of a bizarre and gnarled iceberg of material that might, at some point, reach the light of day.

The most “conventional” material that appears here forms two standalone single-track releases: “They Call Me Sammy” and “I Am Absolutely in Love With You.” The former slinks along over a chooglin’ guitar and organ boogie, with Jaywalker’s vocals double-tracked into harmonies balanced between a whined falsetto and a snotty garage rock lead. His ear for production detail appears here in the fine-grained guitar tones, which vary from a rounded clean pluck to a more grungy low end, and the squealing organ missives, which clip in and out of the mix. “I Am Absolutely in Love With You” establishes a more lackadaisical, stoned atmosphere (“sometimes I gotta lay down / take it easy, take a toke”) with its almost jazzy organ chords and Jaywalker’s simple but affecting vocals. When the organ locks in with the vocal line for the lovely chorus that repeats the track’s name, Jaywalker adds a layer of what seems to be distorted kazoo (?) or simply a heavily disfigured guitar tone, not unlike the fried six string figure at the center of Os Mutantes’ “A Minha Menina.”

Three subsequent Jaywalker releases, “S H A P E L E S S C 0 C 0 0 N,” “Cherry Pie,” and “I Also Want to Love in New Orleans,” explore the intersections of freeform drone and ambient production, extended sample processing, keyboard improvisation, and straight up noise sculpting. “S H A P E L E S S C 0 C 0 0 N” proves to be the most transfixing of the bunch with its high-definition bass tones and garbled noise backdrop, all of which provides a textural yet still harmonic framework for Jaywalker to sing, speak, and proclaim his monologues over. His spoken poetry, coupled with intensifying peals of synth noise, creates a surreal atmosphere of paranoia and mania. “I’m dehydrated, I know, but um, yeah / I know I’ll survive this,” he informs us, as synth blips and field recordings whirr through the mix. I’m into it, quite honestly. It feels like Jaywalker’s craft has plunged off the deep end, in a good way, as he allows his sessions to extend and incorporate a collage of ideas and bizarre tones. Any given segment of his tracks might descend into a single, whistling synth tone droning against near silence, before his voice pops back in: “Somewhere, Iowa […] This old remote road of a place in Iowa I never knew existed […] the pained moaning of the unknown farm animals.” All right.

Elsewhere, “I Also Want to Love in New Orleans” reaches us a purely vaporous strand of smeared and extended samples of unknown origins. Sounding like those YouTube videos you find of, say, “Justin Bieber Played 800 Percent Slower,” in which a pop song is blurred beyond recognition by vaporwave pitch-shifting tactics into the realm of angelic drone bliss, Jaywalker’s track “New Orleans Pt. 1” sounds like some source material stretched and processed into an ambient murk. Jaywalker’s attention to sound placement and spatialization here is notable, with different elements of the mix localized in different quadrants of the spread so the sum total forms a 3D spread of avant-collaged tones. The session here never really “goes anywhere,” but that’s exactly the point. It’s more of a zoned exercise in stasis, but the elements that he laces into it never sink into boredom or generic mediocrity.

And then we have the various recordings released under the Driftwood Sessions banner, which seem, according to the album art and liner notes, to have been culled from home recordings as far back as 2012 and as recently as 2019. Though flashes of what could be called conventional songwriting appear in flashes here and there across this 60-plus minutes of material, they are the exception to the norm of what could be described as paranoid experimental/ambient confusion. Popping these sessions on and just letting them roll behind whatever else you’re doing around the house is an interesting experience. At times you’ll forget what you’re listening to, perhaps when the session cuts to a solitary guitar improvisation or one low organ drone allowed to jostle around for four minutes or so. At other times, Jaywalker establishes a downright lovely atmosphere with his consonant keyboard washes and angelic pad voices.

Though Jaywalker never approaches what could be called a “mastery” of any of the musical vocabularies that he threads into his craft, that has never been, and should never be, the point of experimental composition. The ramshackle nature of his recordings generates its power from the constant juxtapositions he introduces between tonal palettes and styles, and the sense of time dilating achieved by never offering the listener solid ground to stand on. Who needs solid ground anyway? Why not sink into the quicksand along with Jaywalker and enjoy a toke somewhere down there in the depths, hanging out with the farm animals in Somewhere, Iowa.