Web Sights: “Spider-Man: Into the Spider-Verse” and “Mortal Engines” 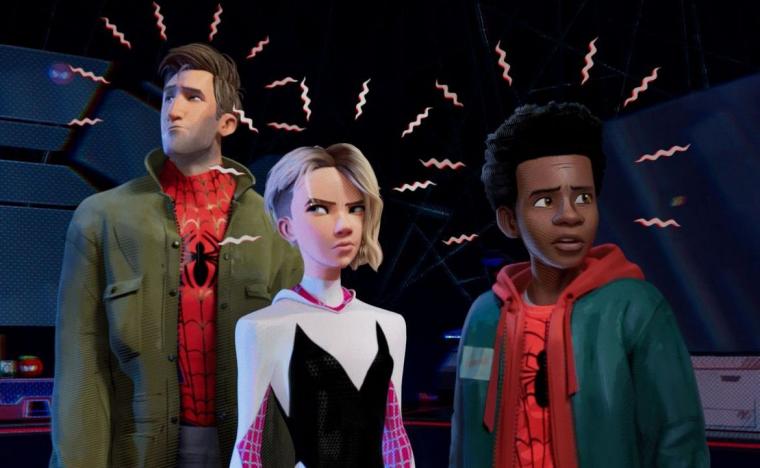 Spider-Man: Into the Spider-Verse

SPIDER-MAN: INTO THE SPIDER-VERSE

Speaking as someone who isn't reflexively psyched for the arrival of a new superhero adventure, my problem with the genre, at least over the last decade, has had almost nothing to do with quality, and almost everything to do with quantity.

When I recently caught the trailer for next spring's Avengers: Endgame, my initial reaction was “Wow, I can't believe it'll have been two years since the last Avengers came out” … completely forgetting that Infinity War was actually released fewer than eight months ago. And after seeing the new Spider-Man: Into the Spider-Verse, my very first thought was that I hadn't enjoyed a web-slinger flick this much since Sam Raimi's Spider-Man 2 back in 2004 … completely forgetting what a great time I had at Jon Watts' Spider-Man: Homecoming just last year. There are so many of these movies, with their frequent cross-promotion further blending the experiences, that barring a rare cultural phenomenon such as Black Panther, it's difficult for any of them to be truly memorable. Spider-Verse, though, may well buck that trend, and almost certainly will if studios don't learn from its example and make a bunch more of these things less figuratively than literally animated.

A delirious explosion of color, incident, emotion, and absolutely first-rate jokes, this fiendishly clever outing directed by Bob Persichetti, Peter Ramsey, and Rodney Rothman finds nerdy Brooklyn teen Miles Morales (voiced by an exceptional Shameik Moore) bitten by a radioactive spider and blah blah blah. Yet long before we get to the plot that finds a hole in the space/time continuum bringing an additional quintet of Spider-Characters into Miles' world to vanquish the dastardly Wilson “Kingpin” Fisk, the blah blah blah itself is both exhilarating and almost breathtakingly beautiful. 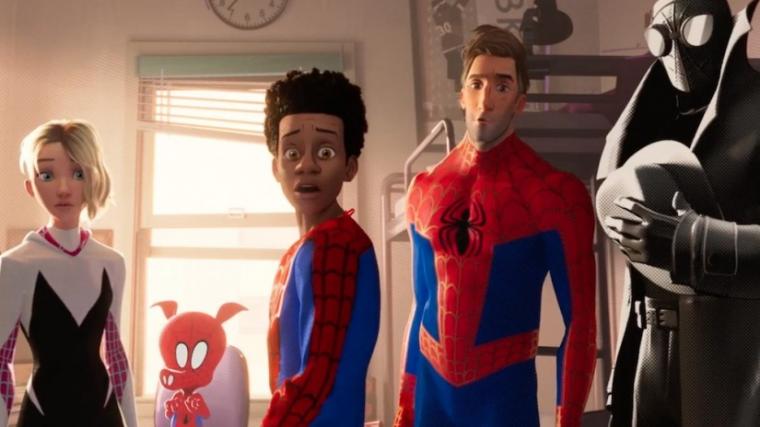 Employing computer animation alongside hand-drawn techniques, the film's visuals suggest what the experience of tearing through a comic book looks like in your mind – the pages' flat images hurled together to give the impression of motion, and the dialogue balloons and boxes of exposition speeding by so fast as to deliver continuous conversational momentum. Unlike in the recent spate of live-action superhero sagas, no attempt is made to disguise the cartoonishness of the source material. Instead, it's wholeheartedly embraced, making it perfectly acceptable for Miles to break the laws of gravity in Road Runner/Coyote fashion and engage in conversation with a costumed mammal named Peter Porker (brought to life in the endearing whine of John Mulaney). The animation in Spider-Verse is liberating. As in The Lego Movie, you feel the film's creators – and, to a similar extent, the vocal cast – reveling in the anything-is-suddenly-possible aesthetic, and delighting in their mission to simply take audiences on a fantastic, and fantastically funny, ride. I giggled the hardest at the imaginatively conceived vision of Times Square with its billboards advertising alternate-universe versions of Shaun of the Dead and – speaking of John Mulaney – the Broadway comedy Oh, Hello! But really, nothing is too silly for this movie, which makes its successful forays into the serious all the more satisfying.

Just about every cinematic superhero yarn boasts action sequences that run too long for my tastes, and gorgeously designed though its epically scaled battles are, Spider-Verse is no exception. Yet the presentational style is (at least for now) still novel enough that my occasional yawns were kept to a discreet minimum, and practically every narrative detour and story-goosing development kept my attention rapt. This was partly due to the crazy pleasure I derived just listening to this thing, because beyond the zippy sound effects and inspiring Daniel Pemberton score, the film boasts an acting ensemble that would almost rival the Avengers and X-Men flicks. (I'll restrict myself to a mention of just 10 others offering topnotch vocal work: Mahershala Ali, Nicolas Cage, Kathryn Hahn, Brian Tyree Henry, Jake Johnson, Zoë Kravitz, Chris Pine, Liev Schreiber, Hailee Steinfeld, and Lily Tomlin, the latter officially rivaling Marisa Tomei as my favorite 21st Century Aunt May.) With co-director Rothman and The Lego Movie's Phil Lord serving as screenwriters, though, Spider-Verse proves almost as moving as it is hilarious; Miles' plight and complicated relationships with his family are treated with dignity, and mine weren't the only sniffles I heard during some of the second half's more poignant encounters. Spider-Man: Into the Spider-Verse is magically entertaining, and in case you were wondering, yes: An animated Stan Lee does indeed make an appearance, and in one of his more riotous cameos, to boot. Excelsior!

It sounded too stupid for words: a tale of futuristic cities on wheels that roam the planet in search of smaller, weaker cities on wheels that can be “ingested” for their natural resources and understandably dazed-looking citizenry. It also sounded too unbearable for words: yet another big-budget, post-apocalyptic behemoth adapted from a series of sci-fi adventure novels (four of 'em) that the Lord of the Rings screenwriting trio of Peter Jackson, Fran Walsh, and Philippa Boyens could no doubt mine for maximum portentousness and a good three hours of our time, not counting the time spent at the inevitable, franchise-mandated sequels. So maybe it was low expectations – way, way, way low – that allowed me to have such unexpected fun at Mortal Engines, a film whose goofy premise and direct lifting from loads of other pop-culture fixtures still transported me to a state of almost embarrassing happiness.

Director Christian Rivers' outsized endeavor has a little bit of everything. And just to be clear, that's because it steals a little bit of everything, with the film's DNA – and, I'm guessing, author Philip Reeve's source material – nakedly composed of bits and pieces from Star Wars, Blade Runner, Mad Max, The Hunger Games, Game of Thrones, and, naturally, Lord of the Rings. But like the monster that Victor Frankenstein fashioned out of used body parts, Mortal Engines proves ambulatory, and kind of staggering, in its own right. Frankly, I was knocked out in the very first minutes, when the mobilized city of 33rd Century London folded into itself Inception-like (more pilfering!) and began chasing down a tiny, defenseless hamlet like Sylvester the Cat racing after Tweety, albeit with greater eventual success. Although this is Rivers' feature-film debut, he's clearly been influenced by Jackson's sense of spectacle, and the prelude is so gargantuan in scope and witty in its fringe touches that I expected the rest of the movie to have nowhere to go but down. I was totally wrong. 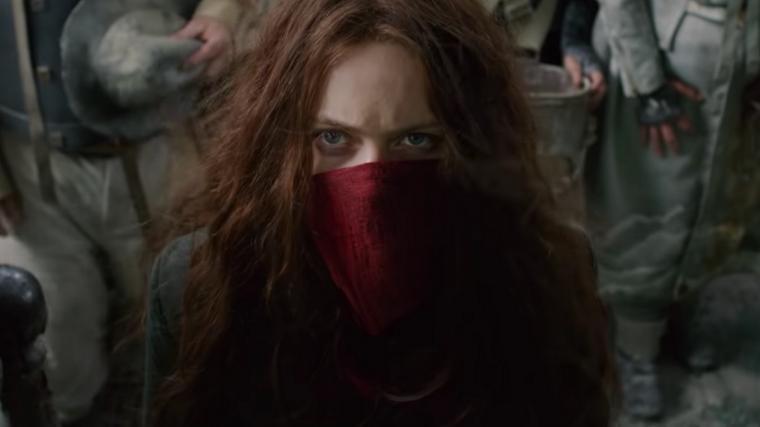 It would take reams of words and more brain cells than I still possess to adequately summarize the plot, which involves a daughter's revenge, an autocrat's hubris, a world-annihilating weapon, and an undead human/cyborg hybrid who collects the heads of discarded dolls. I'd also be loath to describe the storyline even if I could, given that the film's advertising has been so misleading that it's best to enter the experience with as little advance information as possible. [The trailers left my brother and me convinced that the movie was (a) yet another YA thing with generically pretty, interchangeable teens and (b) the first part of what threatened to be a long-running series. Neither is close to being true.] But if Mortal Engines is still in release by the time you read this – and its dismal $7.5 million opening weekend (on an estimated $100 million budget) suggests that it won't be for long – I'd highly recommend giving it a chance.

Catch it for the first-rate visuals that are oftentimes as casual as they are overwhelming, with the above-air respite of a giant truck stop in the sky practically worth the film's admission price. Catch it for the surprisingly strong acting, not only from the expert and rather inevitable Hugo Weaving (maybe nastier here than he's ever before been), but from more novice talents such as Hera Hilmar, Leila George, Ronan Raftery, Jihae, and Robert Sheehan, the latter of whom is like an Eddie Redmayne I have no desire to punch. Catch it for the almost ridiculously touching subplot involving the green-eyed monster Shrike (the CGI-ed Stephen Lang), an initially terrifying, ultimately empathetic creature who's reminiscent of the Night's King in that “Hardhome” episode of Game of Thrones, except that instead of spreading his arms in ghoulish victory, he's spreading them awaiting a hug. And catch it for the bevy of fascinating anecdotal tidbits that are left joyously unexplained. What ultimately led to the Sixty-Minute War that decimated the world's population? What exactly happened in the apparently notorious “Big Tilt”? Why are we told “You never head south in the Outlands – not ever”? And why are Minions, actual Despicable Me Minions, referred to as “the American deities”? I swear, a couple more of these teasing head-scratchers and I might've been tempted to open a book.

For reviews of The Mule, Vox Lux, and Roma, visit “You Can't Teach an Old Mule New Tricks.”