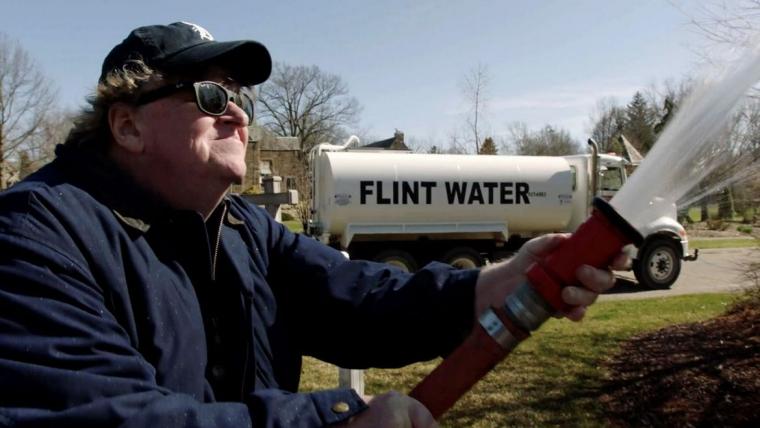 “Was it all just a dream?” Those were the first words uttered by an off-screen Michael Moore in his 2004 documentary Fahrenheit 9/11, Moore's incensed indictment of George W. Bush's first years in office (and, because it's Moore, a bunch of other things, too). Those same words, not at all coincidentally, open Moore's new Fahrenheit 11/9, the numerically swapped title a reference to the day in 2016 that Donald J. Trump was officially named our nation's president. The difference between those identically worded openers, though, lies in the timbre of Moore's voice. In 9/11, he was recognizably sardonic and faux ingenuous, following the question with snarky references to Ben Affleck and Robert De Niro. In 11/9, however, “Was it all just a dream?” sounds like the lament of a truly sad, incredulous man – one who can't believe that, 14 years later, he's forced to ask the same damned question again, and likely to ever-less-receptive ears.

As Moore will go on to demonstrate in Fahrenheit 11/9, he hasn't completely lost his fire, and the lengthy screen time the documentarian and devoted muckraker devotes to the horrific water pollution in his home city of Flint, Michigan, features some of his most outraged, angriest work to date. Yet if you've followed Moore's career, in all manner of media, over the nearly three decades since 1989's Roger & Me, it's hard not to sense a decreased vehemence, a profound sense of loss, in its creator's tone, which might account for the movie's frequently hit-or-miss quality. Without question, Moore wants his Fahrenheit 11/9 audiences to exit his latest film wanting to take action, specifically at the ballot box. But while I frequently found his film worthy and essential – and, not for nothing, quite entertaining – I left feeling that Moore was so pissed about so many different aspects of American life that, for the first time, he wasn't making a movie out of righteousness so much as exhaustion. It's like the cinematic equivalent of the waning minutes in one of those heedless, hours-long fights you have with a loved one: You keep fighting, but you really just want to sleep.

Surprisingly, in Moore's scattershot offering, its least effective material concerns Trump. Maybe this shouldn't be all that surprising, considering that late-night hosts including Stephen Colbert, Seth Meyers, Samantha Bee, and others have easily beat Fahrenheit 11/9 to the punch, having pretty much made criticism of Trump their full-time jobs. Moore gives us a replay of Election Night 2016 (complete with the inevitable wails of I Pagliacci's “Vesti Le Giubba” on the soundtrack), along with familiar footage of the Trump family's doleful post-election faces, the president's hounding of news media at his rallies, and a visual and aural montage of Trump's unseemly obsession with daughter Ivanka. None of this is new. After more than two years, how could it be?

We also get the obligatory comparison to Hitler, which Moore undermines with a truly unwise comedic gambit that finds Trump-rally declarations delivered over footage of Hitler shouting at one of his Nuremberg rallies. Moore's points about Hitler's nationalism eerily foreshadowing America's present nationalism – along with the incipient threat of despotism – are lucidly made and, I think, valid. But it may be currently impossible to analyze Trump and his rise to power in any way, especially comedically, that would make a lick of difference to either his detractors or his supporters. So despite Trump being the purported focus, and the film's very title being Trump-centric, Moore does the smartest thing he conceivably could do under the circumstances, even if it means his latest release will be seen as something of a mess: He moves on. 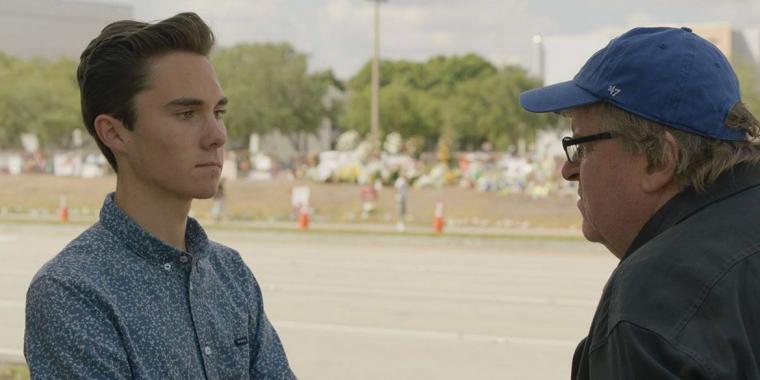 Principally, and most memorably, he moves on to Flint, going into wrenching detail about how the city's source of drinking water was swapped from Lake Huron and the Detroit River to the polluted Flint River – a decision that Moore convincingly demonstrates was politically motivated. Moore doesn't exactly shy away from his critique of Trump here, with Governor Rick Snyder's cronyism deemed a political precursor to the actions of our current president. But what makes the material on Flint freshly devastating is its focus. Moore conducts heartbreaking interviews with those affected by the lead-filled water and endures endless runaround from political appointees and spokespeople, and it's inconceivable that anyone watching this segment of the film could fail to be emotionally affected. It's also hard to imagine viewers not wishing that Moore had made an entire movie solely about Flint and its people rather than the liberal-talking-point grab bag we're instead given. Plenty of fascinating subjects are addressed in the film: the modern-day lunacy of the Electoral College; the political machinations that led to Bernie Sanders' primary defeat; the specious argument that America is a predominantly leftist country. Yet despite boasting a couple of Moore's now-tired comic provocations – namely, his attempt to make a citizen's arrest of Snyder and his hosing of the governor's lawn with polluted water – the Flint material is the only part of the movie that actively boils the blood … at least before we get to the reminders of then-President Obama performing Flint River-related publicity stunts that he insists aren't publicity stunts. (Watch the footage. They so are.)

Blessedly, though, Fahrenheit 11/9 also suggests that there may be a way out of the darkness for Moore (and for us), and it comes in the form of – who woulda thunk it? – optimism. The Flint sequences are harrowing, but they find their exact opposites in the footage of, and Moore's conversations with, those actively fighting for change, some of whose names will appear on mid-term ballots in November: New York congressional candidate Alexandria Ocasio-Coretz; West Virginia state senator Richard Ojeda; David Hogg and fellow student activists from Marjory Stoneman Douglas High School; the millions who participated in the Women's March on Washington and March for Our Lives. Cinematically speaking, it isn't like Moore to see the positive in, well, anything. But in addition to making you feel expectedly lousy, Fahrenheit 11/9 – at least whenever Moore extended humble thanks and gratitude to those demanding change – also made me feel unexpectedly great. Refusing to give either Trump or himself the last word, Moore ends his film with a March for Our Lives recitation of murdered students' names by Parkland activist Emma Gonzalez, followed by more than a half-minute of respectfully crushing silence. Sometimes even a famously lauded/reviled motormouth such as Michael Moore knows when the most appropriate words are no words at all. 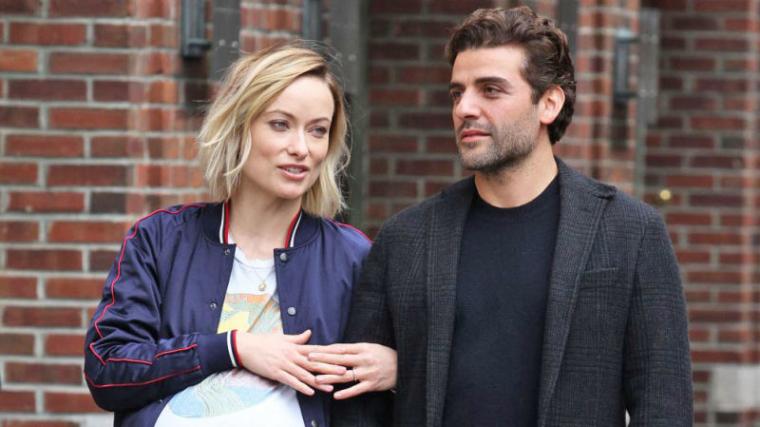 Written and directed by Dan Fogelman, the creator of TV's tearjerking sensation This Is Us, the multi-generational Life Itself has been the recipient of such blisteringly, even hatefully negative reviews that I feel a reflexive urge to defend it, even though I really didn't care for the movie, either.

Telling its chronologically fractured story of loves lost and found, lives beginning and ending, and seemingly unrelated characters from two continents miraculously converging on one street corner, Fogelman's domestic drama with a severe body count is one of those dreaded “We're all connected!” tales á la Crash and Babel and those Will Smith turkeys Collateral Beauty and Seven Pounds. These things aren't always unbearable (sue me, but I like Crash), yet the reason they so frequently are is because they don't feel human; you don't sense people on-screen so much as chess pieces to be schematically moved about, and frequently checkmated, at the director's whim. This is absolutely what I felt at Life Itself, which kills off at least a half-dozen central figures with such narrative-mandated tenacity that it didn't produce in me a dollop of actual emotion. (The actors and composer Federico Jusid's melancholy score do so much literal and figurative weeping that my tears would've just been superfluous.) Every line, every plot point, every meaningful glance and pained silence here seems inexorably tied to the film's carefully blueprinted master narrative, and Fogelman has some inventive fun with the film-within-a-film conceit and his employment of unreliable narrators; I won't deny that there's a lot of artfulness in the movie's design. (It was only mildly surprising to learn that Fogelman's script made Hollywood's 2016 Black List of the industry's best unproduced screenplays, as I'm betting the material reads way better than it plays.) The downside to all this careful, clever construction, though, is the loss of spontaneity. You stop – or never start – caring about those on-screen because they appear to have no independent will, to say nothing of any words or thoughts that don't stem directly from their creator. This, you think, isn't life. This isn't us.

So yeah, Life Itself is tough to defend. Tough, but not impossible – at least if you share my appreciation for the art of film acting. Oscar Isaac and Olivia Wilde, two talents who seem able to forge chemistry with every one of their co-stars in every one of their movies, are magically paired as young romantics, and while I groaned at much of their scripted banter (and never once bought them as college students), the duo's frisky, playful rapport is undeniable. With their dialogue spoken almost exclusively in Spanish, Laia Costa and Sergio Peris-Mencheta enact the film's least pushy, most heartbreaking subplot with palpable affection, while Antonio Banderas, also en español, delivers one of his cagiest, most complexly motivated portrayals in ages. That Bates Motel sweetheart Olivia Cooke digs deep as a tortured rocker on her 21st birthday; Annette Bening provides sharp, tart readings as a pop-culturally ignorant therapist; Jean Smart and Mandy Patinkin are wholly believable as longtime marrieds too happily resigned to be embarrassed by each other. Hell, even Samuel L. Jackson shows up, as Samuel L. Jackson no less, and elicits several (admittedly nervous) laughs before the film remembers it's not a comedy. Life Itself may be bad, and unfairly stole the title of the superb Roger Ebert documentary from a mere four years ago, but its performers, at least, make you actively wonder what all the bile-spewing critical fuss is about. Didn't these reviewers see White Boy Rick or Kin, for Pete's sake?!

For reviews of The House with a Clock in Its Walls and Assassination Nation, visit "Ask Not for Whom the Clock Ticks ... ."