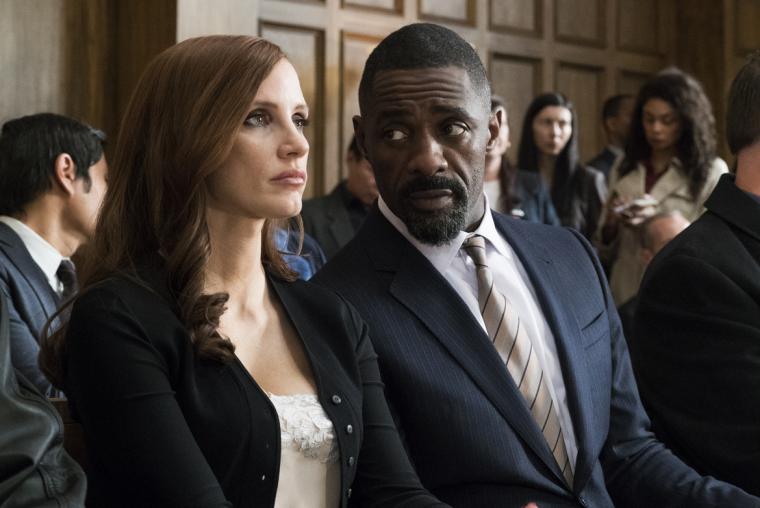 If it weren't for the presence and narration of Jessica Chastain, you might spend the first five minutes of Molly's Game – the frequently winning, sometimes frustrating true-life tale of high-stakes poker entrepreneur Molly Bloom – thinking you wandered into the wrong movie by mistake.

A barrage of images and breathlessly delivered information, the prelude shows and tells how Chastain's national-level skier Bloom had her life plan irrevocably dashed through a freak accident on the slopes, with much attention paid to her training regimen, the angles and velocities required to medal, and the precise nature of the calamity that quashed Bloom's Olympic dreams. It's fascinating stuff. It also seems a more fitting introduction to a triumph-of-the-underdog sports flick than Bloom's seedy tale of ambition, greed, and the collapse of an empire – a point that Bloom herself finally addresses. “What does all this have to do with poker?” she asks from off-screen. “Nothing.” That proves to be not entirely accurate, but for the most part, Bloom is right. Instead, it has everything to do with Molly's Game writer/director Aaron Sorkin.

Beyond those of a select handful of auteurs – Woody Allen, Terrence Malick, perhaps Tarantino – is any screen author's voice as instantly recognizable as Sorkin's? The rat-a-tat dialogue, the musically ornate phrasing, the pithy comebacks, the wordy reminiscences that eventually land on one decisive point … . His TV and movie characters may be distinct (at least when enacted by first-rate performers, which they usually are), yet everyone in a Sorkin entertainment sounds basically the same – like some gifted, sardonic student at a prestigious writers' workshop who never learned to occasionally shut the hell up. To be clear, I say this as a major fan of The American President, Sports Night, The West Wing, The Social Network, Steve Jobs, and certain portions of The Newsroom. (I also love Moneyball, which Sorkin co-wrote with Steven Zaillian, and the Philip Seymour Hoffman scenes in Charlie Wilson's War.) But despite my traditional adoration of his output, there's no question that the star of any Aaron Sorkin project is Aaron Sorkin, and that's the case for his directorial debut Molly's Game, as well. Your enjoyment of the film, then, will likely depend on just how much Sorkin you can stomach in one sitting. Thankfully, for my part, I've built up a pretty healthy tolerance. 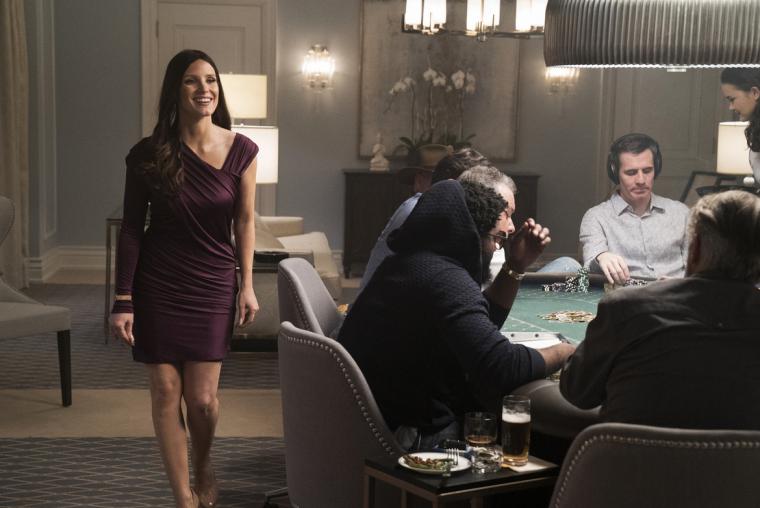 And viewers of Sorkin's latest will need one, because it sometimes feels like the author accepted a bet here to see just how much narrative, exposition, incident, and flashback could be successfully squeezed into 140 minutes. Much like his Oscar-winning script for David Fincher's The Social Network, Sorkin's Molly's Game screenplay features present-day scenes of his lead prepping for a court case, with Chastain's Bloom – arrested by the FBI under charges of money-laundering and other felonies – mounting a defense alongside her equally verbose attorney Charlie Jaffrey (Idris Elba). Those sequences are intercut with vignettes detailing how Molly went from high-end cocktail waitress to the money manager for an underground, $10,000-per-buy-in poker game in L.A., and from there to hosting her own games, with even higher buy-ins, in Los Angeles and, later, New York.

But wait – there's more! We're also given flashbacks to Bloom's ski training as a youth under the thumb of a demanding father (Kevin Costner). And a subplot involving the intrusion of the Russian Mafia. And mini-subplots exploring the fates of numerous men who played in her games. And through it all, Bloom, in voice-over, never stops yakking – verbally underscoring the action, offering explanations for her wordless deeds, and routinely lobbing quick insults, such as calling the high-paid young movie star at one of her games “that green-screened little shit.”

That's an outstanding bitchy line, and a perfectly fitting take-down for the d-bag on its receiving end, whom Michael Cera plays with sensationally loathsome entitlement. (That “green-screened” mention is even funnier if you know that, in the Bloom memoir that Sorkin's script is adapted from, the referenced actor is allegedly former Spider-Man Tobey Maguire.) As with all of the movie's best lines, though, you're constantly aware of it as a line; it doesn't sound like the words came out of a clever character's head so much as a clever screenwriter's head. While Sorkin is notorious for self-plagiarism – treat yourself to the hilarious, embarrassing mash-ups in Kevin T. Porter's “Sorkinisms” videos on YouTube – I only caught one biggie this time around, when he resurrected the story of Olympic runner Matthew “Mack” Robinson previously employed for one of Josh Charles' therapy sessions in Sports Night. But you can still practically see the quotation marks and italics in Molly's Game, and, particularly in the Chastain/Elba sequences, the badinage sounds so manufactured that the conversations are at least as exhausting as they are amusing. (Listening to these verbal-ping-pong matches that Sorkin is famed for, I keep returning to Kevin Malone's observation in The Office: “I love banter ... but I hate witty banter.”) 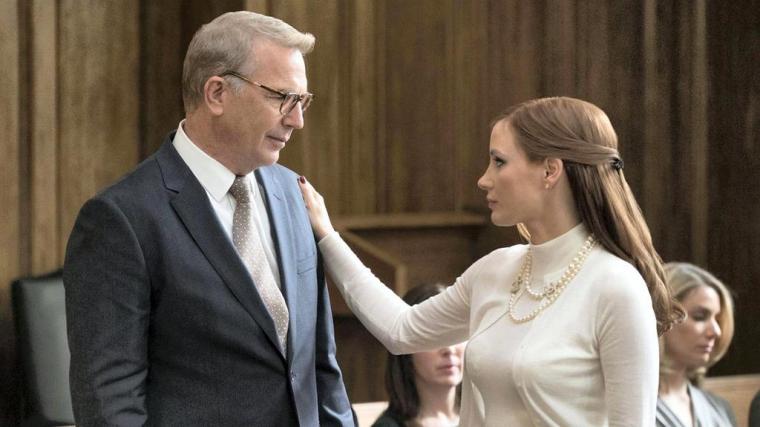 Yet the conversations are amusing, and hugely so, and even when Sorkin's writing is too self-consciously droll – as it is when Molly explains that despite having the same name as a Ulysses character, she's actually not Irish – Molly's Game boasts considerable pull. With the aid of a talented trio of editors, Sorkin ensures that the labyrinthine wheeling and dealing is exciting while keeping the goings-on at all times comprehensible, and although he's no visual stylist yet, his dramatic face-offs have power and flair. (Sorkin may be a writer first and foremost, but his directing debut isn't merely about its words.) And it should come as no shock that much of the movie's success stems directly from Chastain. Working in much the same vein as she did portraying the title character in 2016's vastly underrated Miss Sloane, the performer spits out her reams of dialogue with an emotional urgency that's somehow still understated, whether virulently dressing down a trust-fund brat (Stranger Things' excellent Joe Keery) or – in one of Sorkin's most beautifully planted gags – demonstrating her familiarity with Arthur Miller's The Crucible.

Chastain's apparently limitless magnetism, meanwhile, keeps her watchable even when Sorkin's material fails her, as it does most egregiously in Bloom's late-film reunion with her dad. At first, I thought it was a joke, or maybe a dream sequence of some kind – Costner, looking exactly the way he did in the flashbacks set 20 years prior, miraculously showing up to give his daughter some tough-love perspective and teary catharsis. But unfortunately, Sorkin is dead-serious here, and it leads to the worst scene in the film, with Costner (whose acting can't be faulted) forced into explaining Molly to Molly, effectively wiping away decades of pain and self-doubt with one condescending speech. Sorkin has long been accused of patronizing treatment toward women in his scripts – a charge I can't be completely on-board with given Felicity Huffman in Sports Night and Allison Janney, Stockard Channing, Mary-Louise Parker, and so many others in The West Wing. But it is a shame that despite Chastain's fortitude and fiery dealings with a first-rate supporting cast – the talents also including Jeremy Strong, Chris O'Dowd, Brian d'Arcy James, Justin Kirk, and an exceptional Bill Camp – she's still required to weep and melt and turn, briefly, into Daddy's Little Girl. Molly's Game gives Sorkin fans, myself included, loads to like. It also gives his detractors plenty of additional ammo. 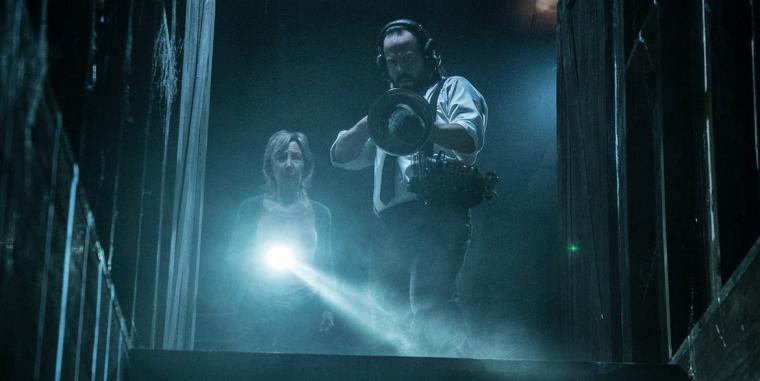 Horror franchises don't always play by their established rules. But I don't think it's too much to ask that they follow a simple one: If the word “last” is employed in the title, that movie should consequently be the series' last. Unfortunately, though, director Adam Robitel's Insidious: The Last Key gives little sense of it being any kind of wrap-up or adieu – hell, we don't even learn what makes the referenced key the “last” one – so we may be stuck with these particular genre outings for a little while longer. To its credit, the film does at least come full circle in the Insidious cycle, ending just as resident psychic Elise Rainier (the invaluable Lin Shaye) prepares to launch into the house-haunting that jump-started this profitable Blumhouse franchise back in 2011. But while the many ghosts and malformed creatures and red-faced demons in the paranormal world of The Further can easily return for additional adventures, could anyone, in light of this dreary new film, conceivably want them to?

Written, as always, by Leigh Whannell – who, also as always, co-stars alongside Angus Sampson as Elise's Mutt-and-Jeff-like assistants – this sequel to a prequel to a sequel finds Elise's childhood home in New Mexico beset by unseen evils stemming from her late father's horrific abuse. Despite the lazy exposition and bum dialogue, there are a decent number of effective jump-scares, plus a moment or two suggesting that Robitel might have a true gift for sustained tension. (In a scene involving hidden suitcases and a dark tunnel, Robitel also demonstrates a canny knack for upending audience expectation through traditional fright-flick compositions that don't lead to the expected payoffs.) But the flashback scenes are too ugly to be entertaining and the present-day scenes too generic to be memorable, and the movie feels severely underpopulated – it's basically just Elise and her boys, a pair of interchangeable blonds, and a barely-around brother who is at least played by the ever-welcome Bruce Davison. Shaye, bless her, continues to look like she's having a ball even when suffering through Whannell's and Sampson's relentless attempts at scene-stealing, and I will forever applaud the Insidious series for giving this wonderful, 74-year-old character actress the chance, every few years, to be a bona-fide movie star. But hopefully, Shaye is done with this harmless yet bland freak-show nonsense now that The Last Key looks to be effectively done with her. I'm dying to see what she can do further, as opposed to Further.