Shymalan a Ding Dong: "Lady in the Water," "Clerks II," and "My Super Ex-Girlfriend" LADY IN THE WATER

A mysterious publicity campaign used to work in M. Night Shymalan's favor; the less you knew about his forthcoming movies, the more you wanted to see them. Now, however, a lack of pre-release information on a Shymalan project seems less about building suspense than trying to quarantine bad buzz, and, in the case of Lady in the Water, with good reason.

What on God's green Earth - or, rather, in Paul Giamatti's blue-green pool - is going on here? In Shymalan's meandering, confounding stab at a modern-day fairy tale, Giamatti plays the stuttering superintendent of a sprawling apartment complex. He discovers a sea nymph - a "narf" - named Story (Bryce Dallas Howard) living in the pool. Story needs to ascend to the Heavyside Layer (or whatever a narf's version of heaven is), but is in hiding from growling, grass-covered beings called the scrunt and the tartutic. With Giamatti's aid, Story hopes to reach nirvana by climbing aboard the wings of a giant eagle during a lavish courtyard barbecue, and ... .

Nearly as hard, it turns out, as I laughed at the movie. I laughed at Giamatti's introductory scene, in which a Mexican family screamed at him to kill the insect creature residing under their sink and, with hilarious Shymalanic phrasing, he responded, "There's no such thing as a creature." (Uh... yes there is. They even come in Great and Small sizes.) I laughed at the witless ethnic stereotyping, which, due to the performers' hideous overplaying, comes off as mean-spirited; it's as if Shymalan were creating Lady in the Water and its yowling, unfunny sitcom spin-off simultaneously.

I laughed at the blasé emptiness of Howard's fish-lady, who is meant to be ethereal but just seems catatonic (excepting one spectacularly out-of-character moment, when she barks orders through a walkie-talkie like R. Lee Ermey in Full Metal Jacket). I laughed at the characters' blind faith in the supernatural happenings, because Shymalan - opting for naturalism over a more appropriate stylization - doesn't make that faith believable for a second. (I cried at the movie once or twice, too, realizing how badly Giamatti, Jeffrey Wright, Bob Balaban, and others were being used.)

Mostly, though, I laughed at Shymalan's unbridled, staggering egotism. It's bad enough that he casts himself in a substantial supporting role, having Story (who's also a psychic, I guess) tell Shymalan's character that the power of his writings will one day inspire a young man to be president - does anyone else find this on the unpleasant side of masturbatory? But it's the writer/director's naked sincerity, the earnestness he lends to the film's lunatic goings-on, that proves truly embarrassing. In a recent Entertainment Weekly, Shymalan stated, "My ultimate goal with the movie is to tell you a ridiculous bedtime story and have you believe it by the end." Well, mission half-accomplished, at least. 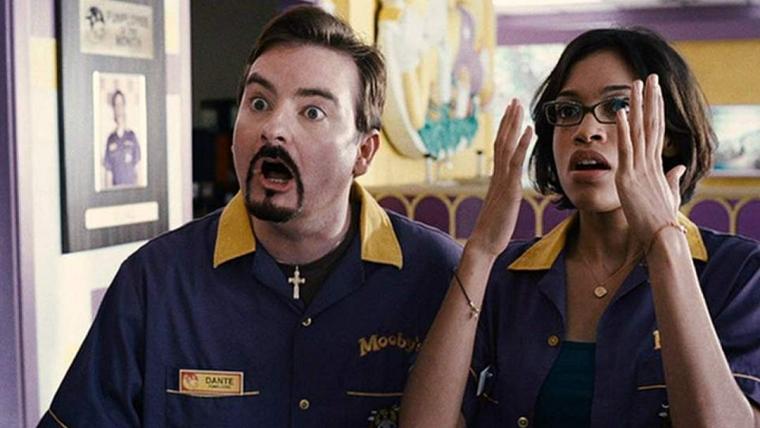 In Clerks II, the characters aren't as fresh, and the jokes aren't as funny, as they were in Kevin Smith's career-defining slack-fest of 1994. Yet incredibly, that's exactly what makes the movie work.

Much of the film is just what you'd expect - a raffish mélange of pop-culture riffs and jaw-dropping crudity - and some of it, such as Randall's inspired Lord of the Rings diatribe, or Jay's frighteningly faithful rendition of Ted Levine's Silence of the Lambs boogie, is hysterical. Some of it - the achingly prolonged "animal erotica" sequence comes to mind - is excruciating. What's amazing about Clerks II, though, are its completely unexpected grace notes of maturity and experience.

The heartfelt connection between Dante (Brian O'Halloran, facially reminiscent of a young David Ogden Stiers) and his boss, Becky (the captivating Rosario Dawson); the disarmingly sweet sight of Jay and Silent Bob (Jason Mewes and Smith) trying to stay sober through Jesus; the tough-guy heartbreak of Randall (Jeff Anderson) as he finally comes clean with his best friend - if it seems that Smith's heart isn't quite in the movie's juvenilia, it's because his characters aren't, either. Both Smith and his Clerks II denizens are feeling a little older here, and a little sadder, and a little uncertain of where to go next; for all of its often-glorious vulgarity, the movie is almost shockingly moving. I, for one, can't wait to see if this searching, emotionally forthright Kevin Smith sticks around. If the Jersey auteur can get the shattering performance out of occasional actor Anderson that he does in the final scenes of Clerks II, I'm no longer certain of what Smith couldn't accomplish. I am overjoyed that My Super Ex-Girlfriend is as good as it is, because, for perhaps the first time in 2006, I can finally recommend a movie that both my friends would like and my mother would like. (My pals have been staunchly refusing to see The Lake House, and try though I did, I simply couldn't get Mom on board with the Hills Have Eyes remake.)

Ivan Reitman's comedy, which concerns well-meaning Matt Saunders (Luke Wilson) and his attempts to break up with his super-heroic - and super-needy - paramour, G-Girl (Uma Thurman), isn't perfect. Teddy Castellucci's score is too whimsically twinkly, suggesting a lame version of James Newton Howard's themes for Reitman's Dave; the soundtrack is peppered with obvious selections (though I did giggle at the use of Puddle of Mudd's "She F---in' Hates Me"); and while I'm always thrilled to see Eddie Izzard, his grapplings with an American accent here strip him of much of his natural wit.

No matter. My Super Ex-Girlfriend is the best light comedy to come from Hollywood since The 40-Year-Old Virgin. The plotting is terrifically clever, and the throwaway bits even more so - when Matt unsuccessfully attempts to hail a passing taxi, G-Girl super-inhales the cab up right up to them; when G-Girl is pissed at Matt, she registers her displeasure by throwing a live shark at him ... through the window of a high-rise apartment. Reitman keeps the tone lighthearted and funny, and Don Payne's ingenious script is also rather miraculous - like Dave, Girlfriend is a movie in which you like every single character on-screen. (You also like every single actor; Wilson and Thurman are sharp and hilarious, and there's particularly wonderful support by Rainn Wilson and the unfailingly endearing Anna Faris.)

Reitman's film is enjoyable because it's witty and charming. It's memorable because it's smart. And it's smart because it offers unique, comic spins on familiar material - if you're Lois Lane, how, exactly, do you dump the Man of Steel? My Super Ex-Girlfriend, the most sheerly likable movie in current release, offers something that far too few Hollywood films do: a fresh comic perspective. Movies that do are the ones we recommend to everybody.