I had the good fortune to view three sensational 2001 releases last week, but as you might imagine, none of them is playing at your local movie theatre. The Warner Bros. and Touchstone studios showed welcome tact by delaying the premieres of Training Day and Big Trouble, initially scheduled for release on September 21, in light of the tragic events of September 11; apparently, both films feature subplots that, in our current national climate, might be inappropriate for mass consumption. (One of the plotlines in Big Trouble, for example, deals with the impending detonation of a nuclear device.) Good for Hollywood, I say, and I hope they feel free to forever shelve any movie where explosions could legitimately be billed as featured characters. Will any of us feel the desire to watch the destructive, slow-motion set-pieces in something like Die Hard or Independence Day ever again? Should we ever have wanted to in the first place?

So while there are still fine efforts to be seen at the cineplex, we're out of luck as far as new releases are concerned. That's why, if you're looking for cinematic diversion these days, your best bests are on video and DVD, where you can catch the recent arrivals of Startup. com, the magnificent documentary from producer D.A. Pennebaker, and Wit and 61*, two terrifically strong tele-films that debuted on HBO earlier this year. All three works put Tinseltown's standard output to shame without the "benefit" of bloated Hollywood budgets; sometimes, less is definitely more.

Perhaps the most amazing aspect of Startup. com is its ability to make the period of 1999 to 2000 feel as distant, and yet as relevant, as the Renaissance; the movie feels simultaneously of-the-minute and locked in history. Directed by Chris Hegedus (who, along with Pennebaker, helmed the fascinating Bill Clinton doc The War Room) and her partner, Jehane Noujaim, the film takes place shortly after the dot-com boom of the late '90s and takes us through its eventual flame-out, tracing the fates of Kaleil Isaza Tuzman and Tom Herman, two twentysomethings whose dreams of running a computer-based business grow, are realized, and shatter in the course of two years. Friends since high school, Isaza and Herman establish the Web site govworks.com as a means of allowing citizens to pay parking tickets online but wind up as stars in a unique tragicomedy in which fluctuating markets and personal allegiances (and betrayals) determine their fates.

Documentaries live or die based on their levels of intimacy, and Startup. com is, at times, almost painfully candid. Isaza and Herman are certainly sincere in their efforts to create a successful business (the money they raise for its construction approaches $50 million), but what registers even more strongly is their sincerity toward each other. The duo is constantly seen hugging and sharing words of encouragement and gratitude - their friendship of more than 10 years is palpable - and so Startup. com, while ostensibly about business, displays a human level we might not have been prepared for; we root for these guys to succeed, and when they inevitably turn against each other, it's as agonizing for us as it is for them. These friends, the film implies, might simply be too close to succeed in business together; their later meetings are conducted with tear-filled eyes, as if neither can stand the hurt they're putting the other through. In its study of Isaza and Herman, the movie provides the most telling, fascinating portrait of a friendship we've seen in years.

The movie is also wickedly entertaining. We're privy to some of the hilarious gaffes that accompany the start of any new business (when a govworks.com employee first tries to pay a parking ticket online, the computer asks whether "park" is the subject's first or last name) and within the scope of the drama are all sorts of mini-dramas, like when the company's offices are broken into by someone - an insider? - whose only possible motive is corporate sabotage. At roughly a hundred minutes, Startup. com is an amazingly enjoyable, time-capsulized look at a very particular point in American history, and those who naturally shy away from documentaries might find it revalatory. 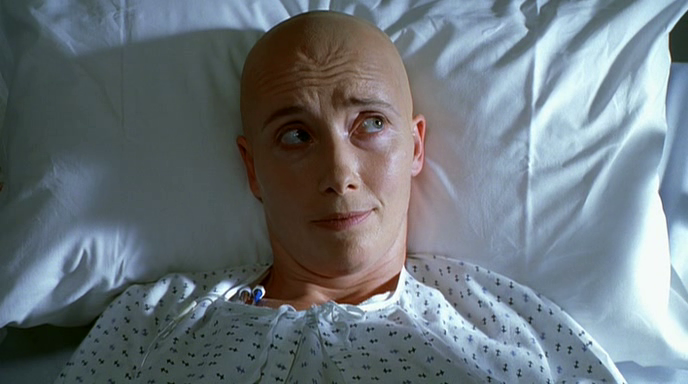 As far as more "traditional" entertainments go, movies might indeed be declining in quality, but try telling that to the folks at HBO. The pay-cable service has been providing topnotch, original TV movies for the better part of 20 years, but not since 1992, when it debuted Barbarians at the Gate and The Positively True Adventures of the Alleged Texas Cheerleader-Murdering Mom, has the station provided a one-two punch as socko as its springtime offerings of Wit and 61*.

Based on Margaret Edson's Pulitzer Prize-winning play, Wit concerns poetry professor Vivian Bearing (Emma Thompson), who undergoes grueling, experimental chemotherapy after being diagnosed with ovarian cancer, and who realizes that her life of theory and literary application - of wit - is mirrored in the faux concern of her doctors, who see Bearing herself as more experiment than human being. Directed by Mike Nichols, who co-wrote the script with Thompson, the movie is beautifully realized from beginning to end, a brutal, cathartic, and often bitingly satirical piece of work. Thompson uses her comedic imperiousness to extraordinary effect - her frequent asides about how "I used to teach; now I am taught" are both funny and almost unendurably accurate - and her trajectory from intellectual to weeping infant is handled with remarkable realism and restraint; it's a tear-jerker without manipulation, which is almost unheard of. Featuring astonishing supporting work from Audra McDonald as a caring nurse and Nichols' brilliant flights between fantasy and reality, past and present, Wit just might be the most artful TV movie seen in more than a decade. Slightly less artful, but no less compelling, is Billy Crystal's 61*, which details the race between New York Yankees Roger Maris (Barry Pepper) and Mickey Mantle (Thomas Jane) to eclipse Babe Ruth's home-run record in 1961. Deliberately old-fashioned in its storytelling technique, 61* is incredibly detailed - Crystal's baseball infatuation comes through in every scene - and features a surprisingly spiky script by Hank Steinberg that gives a lot of terrific character actors (inlcuding Richard Masur, Joe Grifasi, Bruce McGill, and Seymour Cassel) a chance to shine. Beyond the tremendously textured scenes on and off the field, the movie is essential viewing for the pairing of Jane, whose reserved braggadocio is exhilarating, and Pepper, whose delicate mixture of inner turmoil and bravado results in one of the best performances from a young actor I've ever seen. A thrilling piece of Americana, 61* shows Crystal doing his heroes, and his studio, proud; forget the Oscars, the showdown to watch this year will be the Emmy battle (on October 7) between 61* and Wit. Is it too much to hope for a tie?