As I recall, there aren't any overt references to the Guardians of the Galaxy in Deadpool 2 – which is kind of astonishing given that the movie's name-dropping antihero verbally side-swipes fellow Marvel figures ranging from Wolverine to Charles Xavier to the Winter Soldier to a certain Avenger MIA from Infinity War. (After momentarily losing his powers of invincibility here, our snarky protagonist dejectedly mutters, “Just give me a bow and arrow and I'm Hawkeye.”) Yet it's nearly impossible not to be reminded of the Guardians flicks while watching director David Leitch's hyper-violent comedy sequel, because if you thought the comic-book adventures of Chris Pratt and company boasted their genre's most ridiculously entertaining song scores, you were right … until now, that is.

Leitch's follow-up opens with a suicidally depressed Wade “Deadpool” Wilson (played, again to perfection, by Ryan Reynolds) lying atop barrels of petroleum with a lit cigarette in hand and Air Supply's “I'm All Out of Love” on the soundtrack. This prelude is quickly followed by one of many kinetically choreographed action melees, its gruesome-business-as-usual vibe pluckily, and rather inevitably, accompanied by Dolly Parton's “9 to 5.” And on and on throughout the movie: a-ha's “Take on Me”; Rupert Holmes' “Escape (The Piña Colada Song)”; Peter Gabriel's “In Your Eyes”; Streisand's “Papa, Can You Hear from Me?” from Yentl (which, come to think of it, does sound an awful lot like Frozen's “Do You Want to Build a Snowman?”… ); Pat Benatar's “We Belong”; “Tomorrow” from Annie; and if you stay for the end-credits treats, and you should, a familiar Cher hit that never before sounded quite so heroic. I wasn't sure whether to be thrilled by Deadpool 2's über-kitschy collection of tunes or deeply embarrassed, considering that the aforementioned titles might easily have composed the A side to a mix tape I made a quarter-century ago. Regardless, the employment of practically all of these songs made me and my fellow patrons chuckle at minimum and roar at maximum – quite a feat when we were already laughing pretty consistently at the dialogue, visual gags, and Reynolds' sublime asides. Deadpool 2, for me, has a lot of the same problems that 2016's original did, but a lack of legitimately hilarious material is hardly among them.

Is it strange to admit that, when I wasn't thinking of the Guardians of the Galaxy during my screening, I was thinking of Woody Allen? There's a scene early on in which Wade and his paramour Vanessa (the returning Morena Baccarin) excitedly discuss the possibility of kids, and Wade says, “I want a boy … or a girl … definitely one or the other.” That's a total Woody Allen joke, and in this script by Reynolds, Rhett Reese, and Paul Wernick, it's by no means an aberration. When people refer to Woody's “early, funny” movies, they're talking about the ones that ended with 1977's Annie Hall, back when you could safely count on at least a half-dozen wisecracks per minute and you never knew when Allen was going to interrupt a scene by, say, pulling out Marshall McLuhan and facing the camera to sigh, “Boy, if life were only this this.” Bloody viscera and obscenities aside, the Deadpools may be the post-1977 comedies that most successfully replicate the style of early, funny Woody, which they do through cheerful verbosity, (mostly) intelligent satire, a slew of pop-culture references, and our hero's wanton destruction of the fourth wall. In truth, that metaphorical barrier endures more sustained assaults than any of Deadpool 2's costumed crime-fighters or -causers, and that's saying a lot.

Not all of these genially delivered intrusions wind up benefiting the movie. It's fun, for instance, when Wade bitches about last year's Logan piggybacking on Deadpool's R rating and having the temerity to kill off its hero in the last minutes, an ante Wade promises he'll up by killing himself in his movie's first minutes. Yet the reference to Hugh Jackman's final Wolverine outing can't help but remind us that Deadpool is itself piggybacking on Logan in its chief plot that finds Wade having to protect a young mutant (Julian Dennison, the young New Zealander from Hunt for the Wilderpeople) from sinister forces – among them Josh Brolin's soldier-from-the-future Cable – and the kid's own dark impulses. Meanwhile, it's easy to giggle when a pair of computer-animated behemoths confront one another and Wade chimes in with “Here comes a big CGI fight!” That doesn't change the fact that we're still being prepped for another loud, dull CGI fight, the only perks being that one of the ass-kickers is the amusing Russian Colossus (voiced by Stefan Kapicic) and the other is a beloved comic-book villain twice his size. While we're thankfully spared the origin-story banality that marred much of the first Deadpool, the series is still too firmly entrenched in Marvel formula for this sequel to deviate far from the norm, dirty jokes or no dirty jokes. The movie isn't all that effective at separating itself from the thing it's purportedly parodying, and consequently, the narrative remains fundamentally unsurprising – until the film's midway point, that is, and the reveal of its most glorious expression of untamed lunacy.

There are, it should go without saying, dozens of delightfully minor expressions: Wade's comparison of the grosses for Deadpool versus those of The Passion of the Christ; the shade thrown toward Jared Kushner and Fox & Friends; the heavenly-choir accompaniment “Holy shit-balls, holy shit-balls!” that's like something out of Jerry Springer: The Opera; the Basic Instinct gag you can never unsee; Brolin's Cable referred to as “Thanos,” “John Connor,” and, my personal favorite, “The Time Traveler's Wife's Husband.” Plus, almost everything Reynolds does and says as his physically and emotionally scarred superhero – particularly his incensed reaction to a mild joke about Canada – is sprinkled with nutty, self-deprecating hilarity, and when he enacts a satirically endless scene of “For Your Consideration” emoting, damned if the funny/moving moment shouldn't merit the consideration of Oscar voters.

But about halfway through Deadpool 2, Wade and his bartender pal Weasel (a peerless T.J. Miller) decide to form their own superhero team, employing the magically lucky Domino (the wonderful Zazie Beetz) and a handful of others for the derivatively named X-Force. I wouldn't dream of spoiling what happens next. Suffice it to say that, despite my considerable comic-book-flick exhaustion, I'd personally cheer if this riotous franchise extender led to an X-Force franchise of its own … short-lived though it may be. Anything for more time spent with team player Peter (Rob Delaney), whose only power may be for thorough application of sunscreen. “I don't know much about Cable,” the practicality-minded man says while moisturizing, “but he hasn't killed as many people as melanoma.” 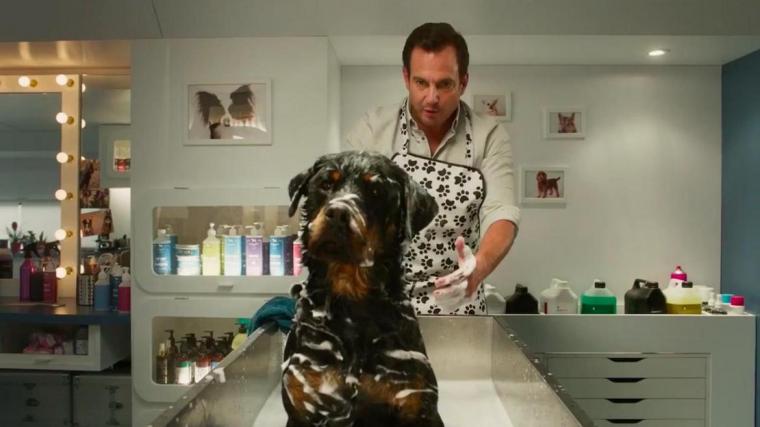 As director Raja Gosnell's previous film credits include a pair of Scooby-Doos, a pair of Smurfs(es), and Beverly Hills Chihuahua, you should instantly know what to expect from Show Dogs, Gosnell's family comedy about a Rottweiler cop (voiced by Chris “Ludacris” Bridges) and his handler (Will Arnett) infiltrating a Las Vegas dog competition in order to find a missing … panda. (Please don't ask for explanation.) So I guess I should have expected a cameo from the Beverly Hills Chihuahua herself – albeit not voiced by Drew Barrymore this time – as she stood on the red carpet and complained about her lack of recent work, saying, “Nobody makes talking-dog movies anymore!” May I opine that it's perhaps because they're always effing terrible? This one is, too, complete with lousy CGI and green-screen effects, puns too cornball for your average first-grader, and a total and typical absence of thought regarding just how anthropomorphic its four-legged creatures are meant to be. (Apparently, humans only hear barks and yips when canines speak to them in complete sentences, but they don't raise eyebrows when the pups open car doors or go zip-lining or lie under sunlamps with cucumber slices over their eyes?!) None of this is worth getting into, even if you're aching to get your child into a movie just for a couple hours' peace, and I wanted to weep for poor Arnett, and for the poor Rottweiler, when the screen partners were forced to boogie together to the Dirty Dancing theme song; neither of their reputations may ever recover. Thank God, at least, for the pleasure of seeing wide-eyed Natasha Lyonne even in an insulting role, and for the enjoyably haughty readings of Stanley Tucci as a fey Papillon who at one point exclaims, with a heavy French accent, “I cannot polish zees turd, but perhaps I can roll eet in glitter!” In Show Dogs, that's exactly what Tucci does.

For reviews of Book Club and RBG, visit “Fifty Shades of Great.”