Is This the Real Life? Is This Just Fantasy? : “Bohemian Rhapsody” 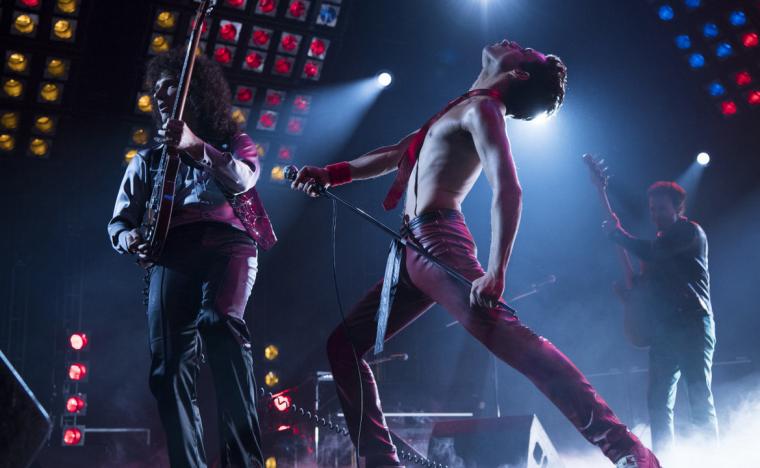 About an hour into the Freddie Mercury bio-pic Bohemian Rhapsody, the screen is suddenly filled with excerpts from reviews of the title song, with the least harsh among many hateful notices calling the Queen track “perfectly adequate.” Depending on where you look, a glance through the film's own reviews can feel similar to that montage, with some of the nation's foremost news outlets attacking the release with a loathing that suggests the second coming of Ed Wood. (The headline for the New York Times' take was “Another One Bites the Dust” … and that was one of the kinder things said.)

But if ever a movie was wholly, deservedly review-proof, it's this one. Yes, I thought that Bohemian Rhapsody was in most ways disappointingly traditional and in many ways bad. It left me, however, with such a movie-going high – and a high composed of numerous incidental thrills well before its phenomenally satisfying finale – that I found its scores of problems, in the end, almost completely irrelevant. As the insistent lyric goes: “We will we will rock you.” And damn if I didn't leave rocked.

Having said that, there's no way I would've felt the same if Queen's musical output weren't so fiendishly catchy, and if Mercury portrayer Rami Malek weren't so thunderously charismatic. Its storyline arc familiar from almost every musical biography ever filmed, Bohemian Rhapsody opens at Wembley Stadium right before Queen takes the stage for its historic 1985 Live Aid performance, then swings back in time to the band's 1970 London origin for a chronological retelling of Mercury's rise-to-riches-with-accompanying-pitfalls saga. (The film climaxes by bringing us full circle to Wembley, with Mercury's AIDS-related death in 1991, though frequently hinted at, included only in a postscript mention.) You certainly know the drill by now: humble roots; unexpected success; increased exposure; major success; unwise influences; trouble in paradise; lowest ebb; inspiring comeback; fin. But even for a genre known for its shortcuts and historical elusions, this musical drama by Bryan Singer – who was replaced late in the filmmaking process by an uncredited Dexter Fletcher – frequently comes across as deeply, depressingly phony. 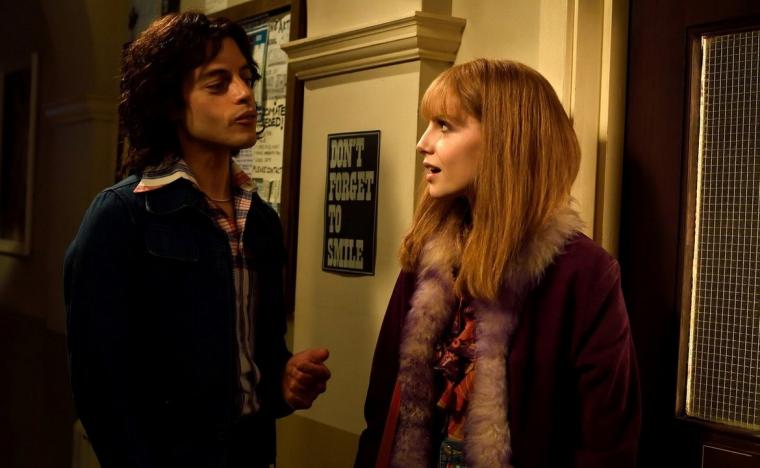 It's oftentimes said that it doesn't matter whether screen events are true; it matters whether they feel true. And no matter how faithful to actual life Bohemian Rhapdosy is (or isn't), far too much of it feels like only-in-the-movies contrivance. Did Freddie, then living under his birth name Farrokh Bulsara, really introduce himself to his future bandmates Brian May (Gwilym Lee), Roger Taylor (Ben Hardy), and John Deacon (Joe Mazzello) mere minutes after their pre-existing group lost its lead singer? Did the man really invent both his stage name and his band's new moniker with as much easy blitheness as depicted here? Were his initial encounters with eventual wife Mary Austin (Lucy Boynton) and lover Jim Hutton (Aaron McCuster) as Hollywood-meet-cute as Singer's film suggests? Maybe yes; maybe no. Regardless, I didn't buy any of it, and also didn't buy the on-screen business dealings featuring Game of Thrones' eminently untrustworthy Aidan Gillen, the scenes of familial discord involving Ace Bhatti and Meneka Das as Mercury's disapproving parents, and much of screenwriter Anthony McCarten's dialogue, which relies a bit too heavily on theatrical wit in place of conversation. (“Freddie, you're burning the candle at both ends.” “But the glow is so divine.”)

Some of the film's mistakes are merely silly and/or lazy ones; during the segment that finds Queen on tour with “MIDWEST USA” brandished on-screen, Mercury is shown addressing his crowds with “We love you, Portland!” and “We love you, Atlanta!” (I know the Midwest covers a sizable swath of the country, but geez … .) There are, however, far more problematic issues, chief among them that in fashioning their Freddie Mercury as a tragic martyr who died for his art – one whose AIDS diagnosis is telegraphed with that hoary cliché of coughed-up blood on a white handkerchief – the filmmakers have approached their material in absolutely the least interesting way imaginable. Bohemian Rhapsody, to its credit, is one of the gayer PG-13 offerings Hollywood has released; while Mercury's sex life is predictably left off the table, same-sex kissing is at least allowed. Yet the film has an uncomfortably priggish bent that feels like a major disservice to Mercury.

It would be one thing if we were merely invited to tut-tut Mercury's preening, swishing antics at his domestic orgies alongside Mary and Queen's hetero bandmates, whose disapproval of Mercury's lifestyle is shown as symbolic of their integrity and his (momentary) loss of it. But the film also establishes former Queen manager Paul Prenter (Allen Leach) as a one-dimensionally treacherous weasel who all but forced Mercury into his hedonistic stupors and terrible business decisions – he's a one-stop-shopping villain, perfect for Mercury fans and gay-haters alike. The film does treat Mercury's burgeoning romance with Jim Hutton somewhat affectionately, but by then, it's too little, too late. Bohemian Rhapsody has been conceived as a morality tale, and a rather heavy-handed one, when it could have, and maybe should have, been pop-opera bliss ... ideally with a Pedro Almodóvar or John Cameron Mitchell at the helm. 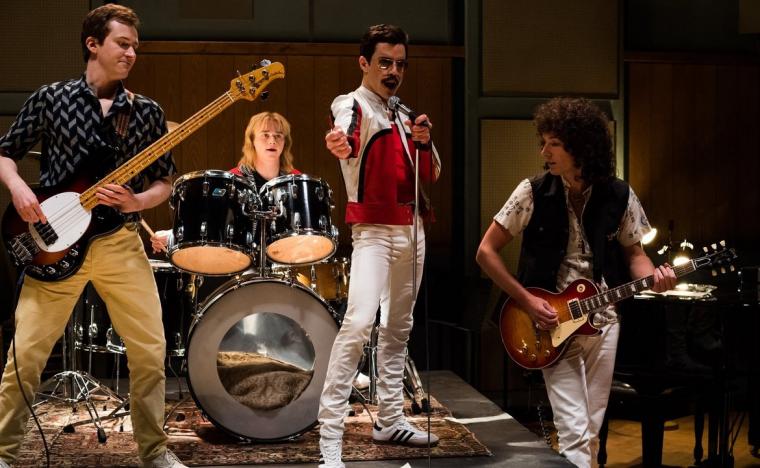 But. But. The music. Admittedly, I don't know a single person who's immune to the effects of the Queen oeuvre, and if I do, I hope they don't identify themselves. Yet even if you only have lukewarm feelings toward the band, and even if, like me, you find yourself occasionally bemoaning the movie's presentation, it's hard to imagine who wouldn't derive crazy joy from Bohemian Rhapsody's series of irresistible set pieces.

Malek is a big reason for that. The Mr. Robot star may “only” be lip-synching to Mercury's vocals, yet he does it with precision and dynamism, and his physicalization of the role, especially in the concert scenes, is magically forceful – a strutting, preening cock-of-the-walk who's like a freer, looser Mick Jagger. It takes a while to adjust to the fake choppers Malek has been given to suggest Mercury's four extra incisors, and in the early scenes, the actor seems almost unable, when reciting dialogue, to keep those faux teeth in his mouth. But the look eventually becomes as much a part of him as costumer Julian Day's outrageous wardrobe selections. And when Mercury is wowing crowds in Rio or Madison Square Garden or Wembley, Bohemian Rhapsody's fearless, on-fire star wholly convinces you that this is an entertainer capable of captivating millions. Malek, who provides a moving and thoughtful portrayal even when his material is weak, rarely makes a wrong step in the movie. On-stage, or in-studio, every step is 100-percent right.

And what sublime steps we're allowed to witness! Musically, the film already had me hooked with its opening strains and, not long after, the sight of Mercury making his first splash at a tiny London club belting out “Keep Yourself Alive.” But from then on, it's one dizzying delight after another: Queen's bandmates inventing the “Another One Bites the Dust” bass line and “We Will Rock You” stomp-and-clap; the zippy montages scored to “Don't Stop Me Now” and “Under Pressure” and “Somebody to Love”; Roger Taylor reaching for ever-higher shrieks of “Galileo!!!” (In a fabulous in-joke, the record producer who turns down Queen's “six-minute operatic dirge composed of nonsense words” is played by Mike Myers, who, of course, brought Queen back to the charts through the inspired inclusion of “Bohemian Rhapsody” in Wayne's World.) Plus, it should go without saying, that Live Aid set, which the film wisely presents in its 11-minute entirety complete with “Radio Ga Ga,” “Hammer to Fall,” and “We Are the Champions,” leaving me so wowed by the spectacle of the crowd – CGI used for the forces of good! – and Queen's beautiful noise that I was practically in tears. Bohemian Rhapsody is imperfect, to say the least. But the glow is so divine.

For reviews of The Nutcracker & the Four Realms, Nobody's Fool, and Suspiria, visit “Clara in Blunderland.”