On Pins and Needles: "Phantom Thread," "Hostiles," and "Maze Runner: The Death Cure" 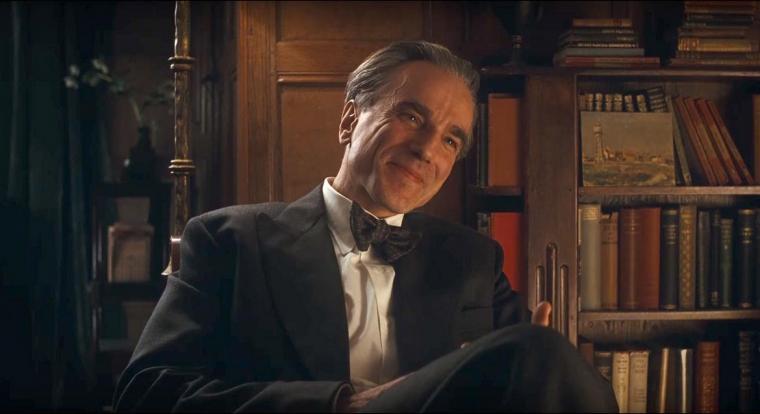 If the news is true, and Paul Thomas Anderson's Phantom Thread does indeed mark Daniel Day-Lewis' retirement from acting, it's an occasion for remorse, if also delight that the legendary performer is at least going out on a high note. (The movie is deservedly nominated for six Academy Awards including Best Picture, Director, and Actor.) But woven into the sadness of “No more Daniel!” is a very specific kind of regret, because man is it a shame the guy didn't make more comedies.

That's not to say that Day-Lewis didn't find opportunities for humor in his big-screen dramas: the president's rambling jokes in Lincoln; Tomas' seductive confidence in The Unbearable Lightness of Being; the drinking of poor Paul Dano's milkshake in There Will Be Blood. But Phantom Thread – a movie whose stately trailers hardly promised hilarity – is the first, and I guess last, Day-Lewis film to fully showcase the man as the graceful, witty comedian he always appears to be when accepting a statuette on TV. (Winning the first of his three Best Actor Oscars, for 1989's My Left Foot, Day-Lewis opened by saying, “You've just provided me with the makings of one hell of a weekend in Dublin.”) Anderson's latest writing/directing achievement is many things, among them a period drama, a psychological thriller, a hearty serving of costume porn, and a deep, if rather perverse, love story. In scene after scene, though, it's also a fiendishly smart, very funny comedy of warring tastes and temperaments, and Day-Lewis, in his sardonic quips and withering stares, proves effortlessly masterful at making us laugh – certainly more than was possible in 1988's unfortunate Stars & Bars, the one bona fide slapstick on his résumé. Heaven knows I'm bummed about Day-Lewis' retirement. I'm even more bummed knowing that Alexander Payne, Wes Anderson, David O. Russell, and other comedy directors didn't work with Day-Lewis before he announced it.

Set in an indeterminate year whose period trappings suggest the late-1950s, Phantom Thread casts the actor as Reynolds Woodcock, a high-end British fashion designer whose fastidious attention to detail has made him a continental legend. (An early montage shows the couturier and his numerous female staffers busy preparing a client, and her dress, for their audience with the queen.) Reynolds' devotion to his work is already unmistakable when his current lover, at breakfast, makes the mistake of complaining about his lack of affection toward her. Ending the discussion with a blithe “I don't have time for confrontation,” he arranges for his sister and business partner Cyril (Lesley Manville, imperious and perfect) to have the woman removed from the house – she's allowed one dress as a parting gift – and Reynolds leaves London for a brief countryside holiday. There, at a rustic inn, he meets waitress Alma (Vicky Krieps), who captures his attention first by clumsily tripping, and then by meeting his gaze with a blushing, beaming smile. The smitten Reynolds asks Alma to dinner. She accepts. She eventually moves into Reynolds' house. And then things start getting complicated. And weird. And kind of scary. And really funny. 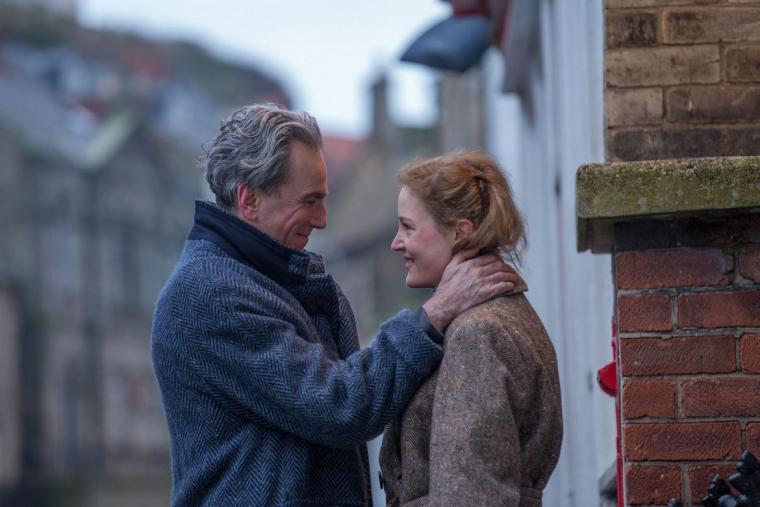 They're funny well before then, too, because Day-Lewis, ever the genius, has found an absolutely ingenious and appropriate way to portray the middle-aged Reynolds Woodcock: He plays him like a little boy. In that first scene with Alma, with Reynolds ordering more and more food as an excuse to keep speaking with her, Day-Lewis' grin is so wide that his cheeks look ready to burst; he's like an eight-year-old who just got Santa to show up at his birthday party. But Reynolds, a man of obsessive professional and personal rituals, is also prone to childish pouting and temper tantrums when things don't go his way, and with Alma around, they frequently don't go his way.

She makes too much noise buttering her toast and slurping her cereal. (And she bites the spoon, for God's sake.) She interrupts his design time with tea that he didn't ask for. She makes asparagus her own way, not the way he likes it. Alma becomes more than an intrusion – she becomes a hindrance to Reynolds' ability to function, and Day-Lewis plays the character's juvenile, self-imposed anguish with forceful yet high-comic precision. You love watching Alma get under Reynolds' skin, partly because it appears so easy (and has the added benefit of driving Cyril crazy), partly because Reynolds deserves it, and partly because of how much you're rooting for the routinely berated and ignored Alma, whom Krieps enacts with an assuredness and unshakable will to match her co-star's.

What happens between this pair, and the manner in which their relationship develops from complex to twisted and back again, are best left as surprises, and there are loads of them in Phantom Thread, culminating in a whopper of a climax that harkens back to an early, teasing Alma line: “If you want to have a staring contest with me, you will lose.” In his most wholly satisfying film since There Will Be Blood, Anderson presents us with an impeccably crafted feature-length staring contest in which neither lead appears ready to blink. But between the supreme artfulness of its period design, the beguiling strangeness of its (oftentimes wordless) narrative, Anderson's compositional finesse, and the three staggeringly fine performances at its center, you may not want to blink, either, nor miss out on a single note of composer Jonny Greenwood's lush, intoxicating score. I entered the movie hoping it would be a fitting swan song for Daniel Day-Lewis and his exceptional screen career. Instead, Anderson gives him, and us, a swan symphony.

Maybe it's the result of seeing Lonesome Dove at an impressionable age – even if, granted, the age of 20 shouldn't be considered “impressionable.” But violent horror movies, in general, don't freak me out nearly as much as violent Westerns, where the starkness and brutality unmitigated by supernatural make-believe tends to leave me feeling queasy. If there are angry Native Americans on-screen, there are bound to be scalpings. If there are women on-screen, there's bound to be rape. If there are cute kids on-screen, they're bound to be scarred for life, should they be lucky enough to survive at all. So it was with both anticipation and dread that I entered Hostiles, an R-rated Western about an 1892 Army captain forced to escort a Cheyenne chief and his family from New Mexico to Montana through dangerous Comanche territory. Anticipation because the film starred Christian Bale as the captain and The Last of the Mohicans' Wes Studi as the chief, and because it was written and directed by Scott Cooper, who previously gave us the entertaining gangster flick Black Mass. Dread because … well, because of the angry Native Americans and co-star Rosamund Pike and the cute kids, three of whom wind up dispatched before the movie is 10 minutes old. Thank God there wasn't a Golden Retriever around. Who knows what might've happened?

Hostiles, meanwhile, gives us just about everything we already expect from the revisionist-Western genre, yet presents it with so little deviation from the norm that, even at its finest, the movie rarely rises above professional competency; Cooper's latest merely establishes its boxes, checks off those boxes, and calls it a day. One minor surprise is that it's certainly one of the weepiest oaters yet made, with Bale's war-weary Captain Joseph Blockers barely containing sobs when bidding adieu to friends, and Pike's traumatized Rosalie Quaid pitched, for much of the film, somewhere between Michelle Williams in Manchester by the Sea and Shelly Duvall in The Shining. Otherwise, this ably directed, well-acted, thematically repetitive saga is content to intercut attack scenes with the same meditations on violence, loneliness, integrity, and death that have been old hat at least since Unforgiven a quarter-century ago, with one scene between Rory Cochrane and Jesse Plemons appearing to sample monologues from that Eastwood classic nearly word for word. (Cochrane plays Eastwood aiming his gun at Gene Hackman, and Plemons plays Clint's squinty-eyed partner grappling with his first kill.) It's all handsomely mounted and gripping on a scene-by-scene basis, and there's little to outright dislike; the film is practically a case study in getting what you pay for. But despite being someone who doesn't much enjoy the shocks that modern Westerns can deliver, I wanted more shock, or at least less predictability, from Hostiles, which reserves its most unexpected moment for the arrival of current Oscar nominee Timothée Chalamet, saddled with a wispy mustache, French accent, and nothing in the way of a character. Were he in a Star Trek episode, he'd also be wearing a red shit. 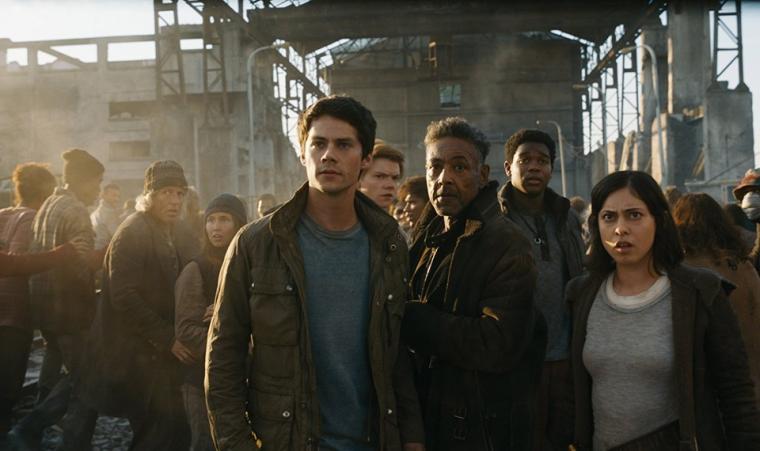 It opens with a high-speed desert chase suggesting a pubescent Mad Max: Fury Road. It closes with fiery retribution suggesting the über-villainous return of Mrs. O'Leary's cow. And in between, Maze Runner: The Death Cure gives us screeching zombie hordes, malevolent medical procedures, dozens of improbable or downright impossible escapes, characters with an amazing knack for sneaking up on one another, and Walton Goggins with a squid's complexion and no nose. I could still barely stop yawning.

In its way, I suppose this third and final installment in the action-thriller franchise adapted from James Dasher's YA-lit series achieves a kind of grandeur, given the greatly expanded natures of the landscapes and visual effects, director Wes Ball's go-for-broke set pieces, and the young cast members performing with something akin to operatic fervor. (Lead Dylan O'Brien does some especially moving work in the final half hour, though I missed the adult charisma he brought to last fall's American Assassin, which was clearly filmed after this one wrapped.) But our time away from this series – its second part, The Scorch Trials, having landed in the fall of 2015 – has done nothing to freshen its too-familiar dystopian narrative or to make its fundamentally uninteresting characters at all interesting. And as the film is basically one protracted action climax, it takes a long, long time to reach the end of its 140 minutes. (Ticking-red-clock movies frequently drive me batty, but Death Cure sure could have used one of those clocks, because you could drive semi trucks through the conversational pauses.) Still, those playing the imperiled youths – among them Ki Hong Lee, Kaya Scodelario, Thomas Brodie-Sangster, Dexter Darden, and the superb Rosa Salazar – largely make up for their roles' collective lack of personality with performance intensity and earnestness. Given similarly iffy material, it's still a treat to see Patricia Clarkson, Barry Pepper, Aidan Gillen, and the great Giancarlo Esposito. Ball stages smashing nail-biters involving a terrifying leap from a skyscraper and the airborne trajectory of a city bus. And hey, for the last installment in a cinematic YA franchise à la the Hunger Games and Harry Potters, we certainly could've gotten worse than Maze Runner: The Death Cure. We could've gotten Maze Runner: The Death Cure; Part 1.