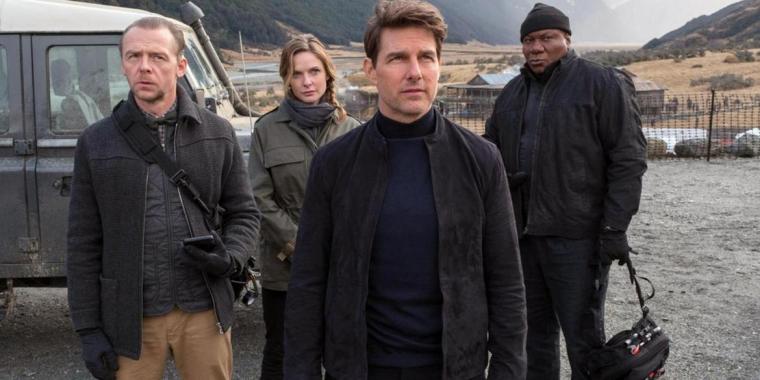 Lord knows we don't need any more awards for movies and the people who make them. But after watching the latest sequel to Mission: Impossible – hell, after watching its first 10 minutes – I was actively wishing that someone would at least fashion an oversize blue ribbon, or maybe an Edible Arrangements bouquet of some sort, in recognition of “Best Pre-Opening-Credits Sequence.” Because the one that writer/director Christopher McQuarrie and company have devised for Mission: Impossible – Fallout is practically a movie of its own, and an awfully good one.

At the start of McQuarrie's prelude, we're given the return of Tom Cruise's Ethan Hunt, of course, as well as the traditional “should you choose to accept it” invitation from his Impossible Missions Force superior (Alec Baldwin), this particular mission involving potential nuclear weapons falling into evil hands. We get reappearances by Hunt's two-man team of franchise favorites Luther (Ving Rhames) and Benji (Simon Pegg), plus a requisite car chase, gunfire, and the sight of a conflicted Hunt having to choose between saving an ally or losing that friend in service to the greater good. And for a while, it's all fast-paced and blithely enjoyable – exactly the M:I opener you're hoping for.

But events quickly take a turn toward the shocking, as a failure on Hunt's part leads to apparent global catastrophe. From the audience's perspective, the film begins to appear rather grim. And then almost nihilistic. And then … kind of funny. Then really funny. Then the laughs subside in favor of breathless anticipation. And then, at long last, composer Lalo Schifrin's familiar “DUN … dun dun dun dun DUN … dun dun dun dun …” theme music kicks in, and the title cards blast onto the screen. When I saw the movie on Friday night, patrons applauded. They would've been right to clap after seven or eight subsequent sequences, too, but perhaps couldn't quite wrest their clenched hands from their armrests.

Not long into the film, Luther asks a shackled terrorist, “Where the plutonium?”, and that's probably as much plot synopsis as Fallout requires. (In truth, Mission: Impossible – Where's the Plutonium? would've made for a perfectly apt alternate title.) For those demanding more, this direct sequel to Rogue Nation – McQuarrie's M:I entry from 2015 – finds Hunt and company again attempting to foil a nefarious plot by the chaos-driven Syndicate and its diabolical Solomon Lane (Sean Harris), with Jerusalem, Mecca, and the Vatican all targeted for nuclear annihilation. Yet even if the narrative details wind up leaving your brain by the time you reach your car, you'll likely remember the movie's incredible set pieces for days and weeks afterward: Hunt and an unwanted assistant (Henry Cavill's August Walker) skydiving through a lightning storm, their free-fall as excitingly disorienting as anything in Gravity; the brutal hand-to-hand combat in a gleaming-white men's room; the detonator that gets repeatedly kicked maddeningly out of reach. When McQuarrie's movie is really rolling, which is about 90 percent of the time, the exhilaration you feel is matched by a deep, nearly giddy amusement at the sheer chutzpah of its stunts, fights, chases, and cliffhangers. I'd have to go back to Mad Max: Fury Road to name an action blockbuster that left me so colossally happy. 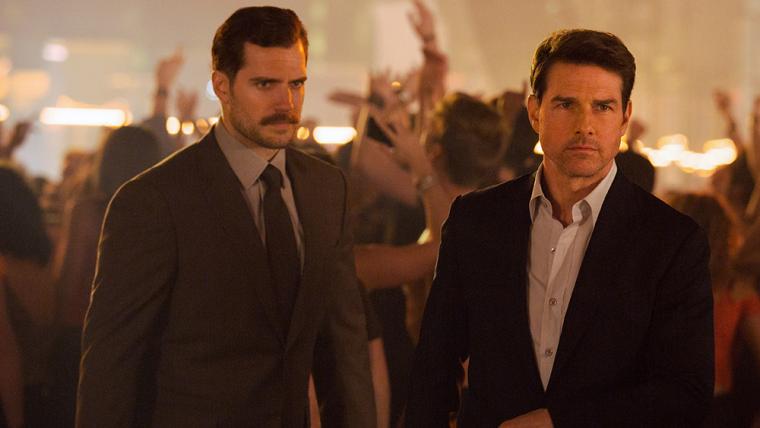 Happy, and more than a little grateful, because Fallout also happens to be the most unequivocally human of this summer's many, many franchise extenders. That's frankly surprising, considering the 22-year-old M:I film series has rarely shown much interest in people. (When bona-fide acting legends have stolen the show in the past, as Vanessa Redgrave did in 1996 and Philip Seymour Hoffman did in 2006, it's been principally due to natural talent and charisma – they've triumphed over their material rather than in it.) But from the soulful comic relief of Rhames and Pegg to the hard-won authority of Baldwin and Angela Bassett to the enigmatic depths of Rebecca Ferguson, Vanessa Kirby, and the returning Michelle Monaghan, the performances here are universally strong and the performers genuinely connected to their material. Even Henry Cavill, the stiffest of all cinematic Supermen, is allowed to be witty and life-size.

Best of all, Cruise reminds us that, when he puts his mind to it, he can still be a first-rate actor in addition to a peerless movie star. It should go without saying that the man holds the screen about as commandingly as anyone alive. Yet his willingness, in Fallout, to let his 56 years show, even if just a little bit, makes Ethan Hunt empathetic and relatable in ways he's never been before; I'm not sure that anything in the film is quite as charming as Cruise's exhausted eye-roll mid-fight, as if even he couldn't believe, at his age, what he was putting his body through.

Between Cruise's heroic portrayal and even more heroic stuntwork, the endless twists and turns that McQuarrie delivers as both writer and director, the topnotch supporting crew, the razor-sharp editing, and the numerous set pieces you want to talk about endlessly – with the climactic helicopter sequence a masterwork of scary/funny finesse – Mission: Impossible – Fallout is an almost impossibly good time. After Hunt demonstrates the creation of the series' hilariously ludicrous latex masks, Walker asks, with disbelief, “People actually fall for this shit?” When it's done this well: Yes. We absolutely do. 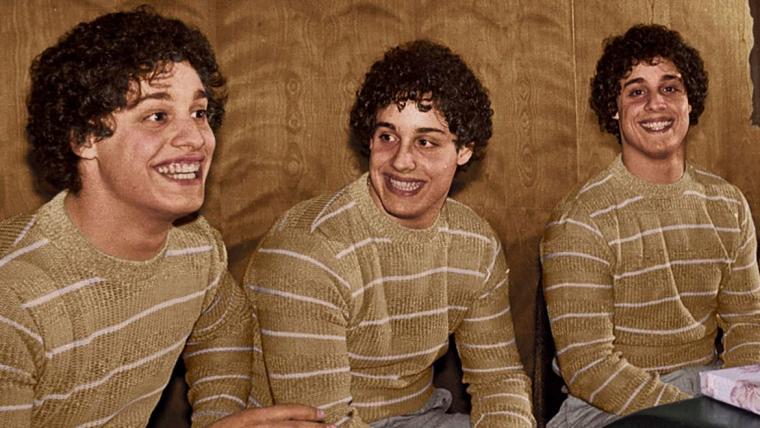 Katrina & the Waves' “Walking on Sunshine” may be the most insanely cheerful pop song of the '80s, and when you hear it employed in director Tim Wardle's superb documentary Three Identical Strangers, it's under the cheeriest of circumstances: a montage of separated-at-birth triplets Robert, Eddy, and David enjoying their newfound fame, and hugely enjoying each other's company, as the feel-good tale of 1980. Granted, "Walking on Sunshine" wasn't released until several years afterward. But given a tune this peppy, what's the point in bitching?

Adopted by different families, Robert Shafran and Eddy Galland found one another after students at Robert's community college, on his first day, kept mistaking him for former student Eddy and a meeting was arranged; David Kellman entered the picture after one of his own adoptive relatives saw a photo of “miracle twins” Robert and Eddy in the paper. Not long after the three 19-year-old lookalikes were finally reunited – all sharing similar tastes and personality traits despite growing up in unrelated lower-, middle-, and upper-class households – they became instantly inseparable BFFs, tabloid sensations, and talk-show fixtures … and appeared to love every minute of it. Wardle's “Walking on Sunshine” montage underscores the young men's beaming joy as they goof around on Donahue and the Today show and briefly ogle Madonna in Desperately Seeking Susan, and for a few minutes, Three Identical Strangers reaches an apex of real-life jubilation that's absolutely irresistible. Enjoy the feeling while it lasts, though, because if the film's first half hour is amazement with a happy face, the hour to follow is astonishment that's more closely tied to wrenching heartache, anger, and horror.

As opposed to the recent, terrific docs Won't You Be My Neighbor? and RBG – movies whose subject matter makes them spoiler-proof – the queasy thrill of Wardle's achievement lies in its surprises that morph into shocks. So it's probably to your benefit, as a viewer, to enter the film with little advance knowledge regarding how the triplets' initial euphoria was eventually undone by revelations about not just how the triplets were separated, but why, and what was hoped to be gained in the process. What can be safely revealed, I think, is that anyone who remembers seeing or hearing about the triplets in the '80s and thought “This story is too good to be true!” was wrong; it turns out that the story was too true to be good. (We're tipped off to this early in the film when we realize that only two of the three brothers serve as interview subjects.) His movie rife with echoes of Josef Mengele and “scientific” methodology that emerges as deeply sinister, Wardle perhaps indulges in too much show-offy business in his staged re-creations, and his ending doesn't feel like a satisfying finale so much as a dead stop, with reams of burning questions still lingering. (Many of them, to be fair, are presently unanswerable.) But the phenomenally engrossing, eventually enraging Three Identical Strangers – a dream cloaked in a nightmare – shouldn't be missed, either for its vertiginous highs or its pummeling lows. Remember that Brady Bunch episode in which Peter bumped into his identical twin in a high-school hallway? As a kid, I thought that plotline was stupid. As an adult, it seems more accurately terrifying.