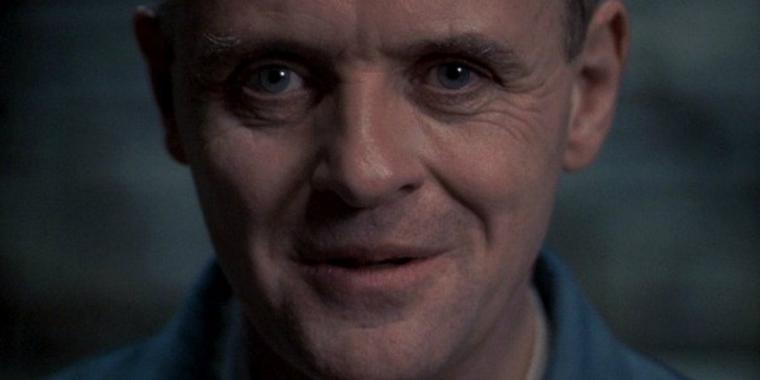 Anthony Hopkins in The Silence of the Lambs

This isn't the home-viewing article you were meant to read next.

I was actually more than halfway finished with a completely different one on Monday when, while writing from home, the storm/tsunami/whatever that ripped though our area also ripped power lines off my apartment building's roof, leaving me and my fellow tenants without electricity or Internet service. So because I wasn't working on a laptop and the power still hasn't returned after more than three days, the half-finished article is still sitting there. Oh, and a tree fell behind my car during the storm, and then downed power lines fell on the tree, and everything's still lying there, so I haven't been able to drive since Monday, either. It's a nightmare. But I can't help but laugh.

So guess what this new article is gonna be about!

No, not writers in isolation. (I've recently covered Barton Fink and The Shining, so what would be the point?) Instead, let's look at a few home-viewing options that provide laughs within their nightmares – five titles from 1976 to 1991 that offer a lot of scariness combined with a healthy dose of humor. I'd probably be at my place watching one of 'em right now, but ya know … . 2020. 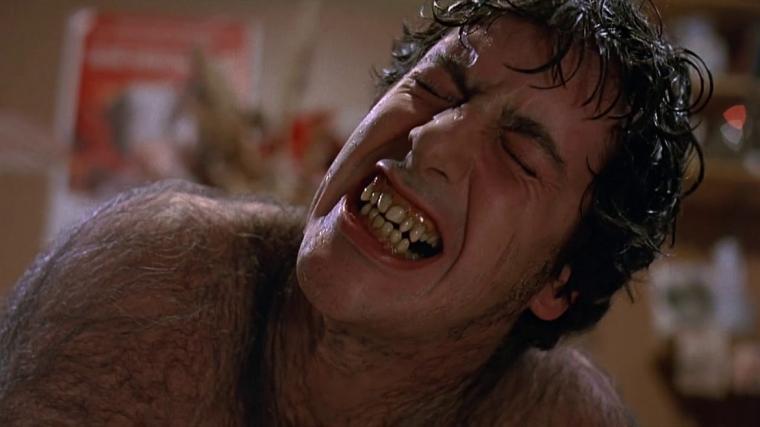 An American Werewolf in London: Considering that director John Landis' filmography included Kentucky Fried Movie, National Lampoon's Animal House, and The Blues Brothers, and considering lead David Naughton had been singing and dancing his adorably carefree way through recent commercials for Dr. Pepper, there was every reason to expect this 1981 horror comedy to land more on the side of “comedy” than “horror.” And to be sure, there are laughs both before and after a hirsute attacker kills Griffin Dunne's Jack and leaves Naughton's David a paranoid Lycan-in-training: our backpacking protagonists making unwisely derogatory jokes about the Yorkshire moors; a confused David waking up naked in the wolf enclosure at the London Zoo; Jack returning from the dead in increasingly grisly states of disrepair. (By his final scene, for understandable reason, the poor guy has been replaced by a crumbling mannequin.) Yet for all of the chortles delivered by An American Werewolf in London and Landis' previous efforts, the director also proved surprisingly adept at scaring us silly here, with his roving camera and consistently sharp timing providing numerous memorable frights in darkened suburban neighborhoods, brightly lit subway terminals, fog-covered landscapes, and, most particularly, feverishly vivid dreams, with Rick Baker's Oscar-winning makeup effects (the first Oscar awarded in that new-for-1981 category) routinely stealing the show whenever Dunne's sardonic line readings weren't. Best giggly-scary moment: It's certainly not the bit that finds David's family brutally murdered by Nazi-zombie werewolves (!) before one of the undead graphically slits David's throat. That's just horrifying. The best giggle-scare comes right after that, when you discover that the previous scene was just a dream … right before another Nazi-zombie werewolf stabs Alex to death in what turns out to be another dream. A dream-sequence double whammy! I still don't know whether I'd rather hug or slap Landis for that. 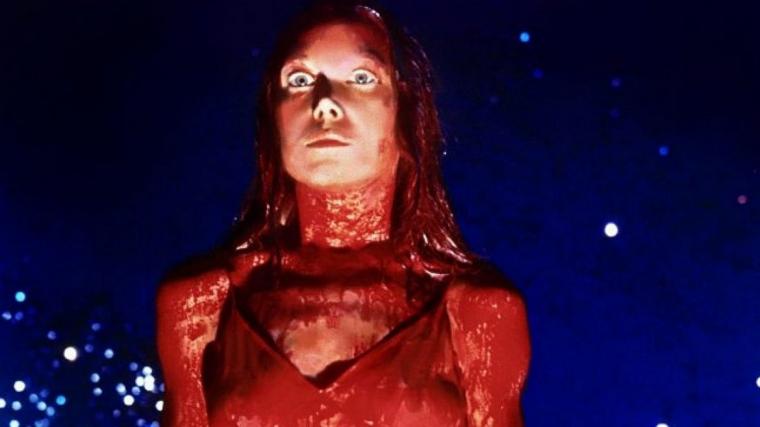 Carrie: A few questions for those who've seen director Brian De Palma's masterful Stephen King adaptation from 1976: (1) Did you know that the high school attended by telekinetic Carrie White and her tormentors had a name? (2) Did you know its name was Bates High School? (3) Did you know the name was a deliberate nod to Psycho's Norman Bates? And (4) Are you at all surprised? Especially early in his career, no one celebrated and mimicked Hitchcock with more gusto than De Palma, and so it makes absolute sense that he'd christen his film's school – the home to its most unsettling horrors – after the master of suspense's most psychotic character. But despite the frequent heat De Palma took for being a Hitchcock devotee/plagiarist, Carrie, as a work of genre filmmaking, is an absolute original: a truly terrifying tale of long-bottled hysteria and absolute vengeance, yet one graced with lyricism, tenderness, tragedy, and, happily, comedy that doesn't come at the expense of the anguished 16-year-old at its center. Oscar nominees Sissy Spacek and Piper Laurie bring the gravitas, but plenty of others bring the smiles and chuckles, and De Palma's stylistic effects (Fast-motion! Split-screen!) are so controlled yet so imaginative that you don't giggle at the jokes so much as the chutzpah. Best giggly-scary moment: Many would likely opt for the climactic hand from the grave, a “surprise” that might've affected me more strongly had I not heard about De Palma's legendary jump scare years before I finally saw the film. Even after a dozen viewings, though, I still can't help but grin and shiver when Carrie traps her teachers and fellow students in the gymnasium after the pig's-blood fiasco, promising a telekinetic retribution like no other. Good riddance, Bates High. And R.I.P. Coach Collins. At least you tried. 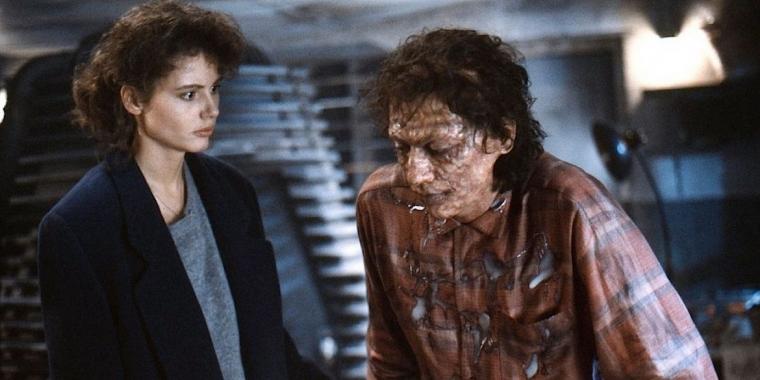 The Fly: By mid-July of 1986, my cineplex co-workers and I were satisfied and tickled knowing we'd already seen the year's grossest movie, because for sheer viscera, certainly nothing could outdo James Cameron's Aliens, right? Well … wrong. Because on August 15, a release loosely adapted from a goofy 1958 scare flick made its debut, and in terms of gore content, the film kind of made Aliens look like Strawberry Shortcake. This was made even more unexpected by the gore, for the most part, not coming from the movie's victims, but rather its hero. Director David Cronenberg's teleportation-gone-wrong saga gives us a delectably simple premise in Jeff Goldblum's scientist Seth Brundle accidentally combining his molecular structure with that of an errant fly, after which romantic rival John Getz steams and girlfriend Geena Davis frets. (Poor Davis should fret, given that her newly pregnant Veronica is carrying Seth's baby and has Cronenberg himself playing her gynecologist!) And no film boasating Goldblum at his most enjoyably neurotic is going to be without humor, so we were right to expect some solid cackles amidst the Oscar-winning viscera. I'm not sure we should have expected one of those laughs, however, to land after Seth – now securely a Brundlefly – vomited on his food before consuming it and apologetically told the aghast Veronica, “Ugh … that's disgusting.” Friends and I made plans to grab dinner after our screening of The Fly. We didn't. I'm not sure I ate for days. Best giggly-scary moment: Goldblum's escalating transformation/deterioration is hilariously repellent on numerous levels, especially when Veronica tries to ward off her insect beau's advances and ends up ripping off his entire jaw. The Brundlefly is still no match for that inside-out monkey, though. Seriously: Eat before watching this thing. You won't have an appetite after. 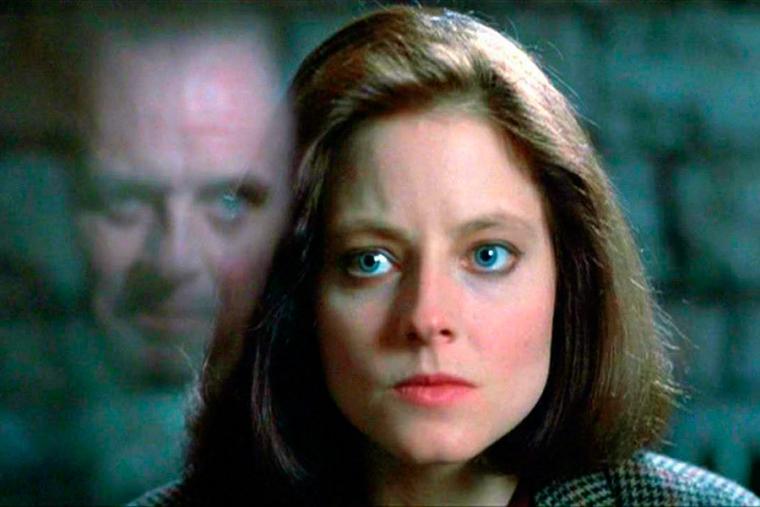 The Silence of the Lambs: His first scene is shocking not because you're terrified, but because you're irrationally amused. Winking at his guest, tinkering with a playful Southern accent, sharing recipes: Is a cannibalistic serial killer supposed to be this charming? (Okay, granted, his recipe involves a dish you ordinarily wouldn't pair with fava beans and a nice Chianti, but still … .) By the time we've concluded our first scene with Anthony Hopkins' Hannibal Lecter – and there are really only a handful more – we're primed to recoil from but also deeply enjoy his suggestive verbal duels with Jodie Foster's FBI-agent-in-training Clarice Starling. And that undercurrent of delight – principally the performance exultation evident in each of Hopkins' elongated syllables and miniature shifts in bearing – is what keeps director Jonathan Demme's fantastically re-watchable entertainment from ever being anything close to a “routine” suspense thriller. Without ever seeming pretentious, Demme came close to creating operatic suspense and thrills. And with The Silence of the Lambs feeling big but not broad, we're invited to laugh and shriek with equal heartiness, which my preview-night crowd did until we didn't know if we were at the scariest picture of the year of the funniest picture of the year. The Oscars wouldn't make it official for another 13 months, but it turned out we were simply at the Best Picture of the year. Best giggly-scary moment: While just about every encounter between Clarice and Hannibal tingles with insinuating (yet borderline-romantic) ickiness, few scenes elicit a giddy “No no no no no … !” refrain so much as Clarice helplessly feeling her way through a pitch-black basement while Jame Gumb, sporting night-vision glasses, follows behind so closely he can touch her. And he tries. We all winced and giggled like mad, but man … . What a creep. 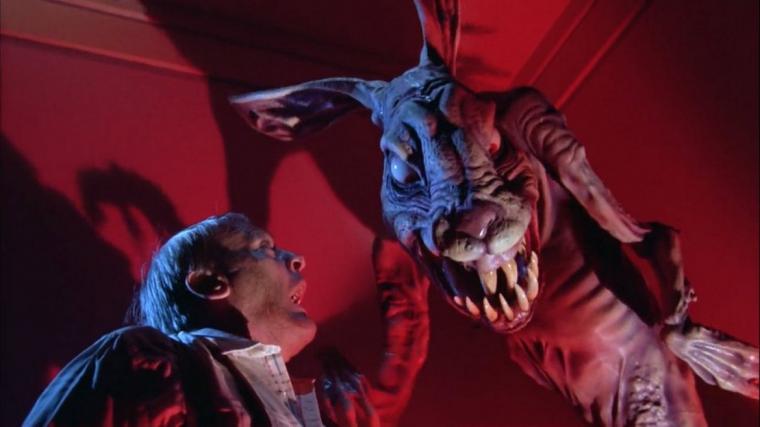 Twilight Zone: The Movie: This 1983 update on Rod Serling's anthology series isn't terribly well-remembered, and perhaps shouldn't be, considering its biggest claim to fame – then and now – was as the film that cost co-star Vic Morrow and two children their lives in a helicopter accident. Adding insult to fatal injuries, among the release's four distinct segments and “Something Scary” prologue, the Morrow episode “Time Out” is Twilight Zone: The Movie's second-least-interesting one, with John Landis' tale of a bigot's comeuppance only slightly more bearable than Steven Spielberg's achingly winsome “Kick the Can.” (If you haven't seen this low point on Spielberg's résumé, it's like Cocoon, only freaking awful.) The other three vignettes, though, are sensational. Landis' prologue, with Dan Aykroyd and Albert Brooks playing “Name That Tune” and recounting favorite Twilight Zone episodes, delivers plenty of laughs and a terrifying kicker. “It's a Good Life” is a delirious Joe Dante freakout with an intensely touchy grade-schooler, a girl without a mouth, and a Bart Simpson (vocal portrayer Nancy Cartwright, actually) who gets eaten by a cartoon. And best of all is George Miller's “Nightmare at 20,000 Feet,” which gives us a fanged, clawed monstrosity on an airplane's wing and John Lithgow enacting several dozen variations on “panic attack.” Every time Lithgow appears to hit his peak of hysteria, he somehow climbs higher, making you think that climactic ambulance ride is maybe a relief. Maybe. Best giggly-scary moment: The arrival of that enormous, shrieking, shaved rabbit with teeth as big as drumsticks would be a solid choice. But for pure scream-laugh perfection, I'm choosing Lithgow trying in vain to sleep, opening his eyes, staring at us for a few seconds, bravely opening the shade on his window, and … . A-a-a-a-a-a-a!!! Lithgow's eyes practically goggle out of his head. Ours do, too.