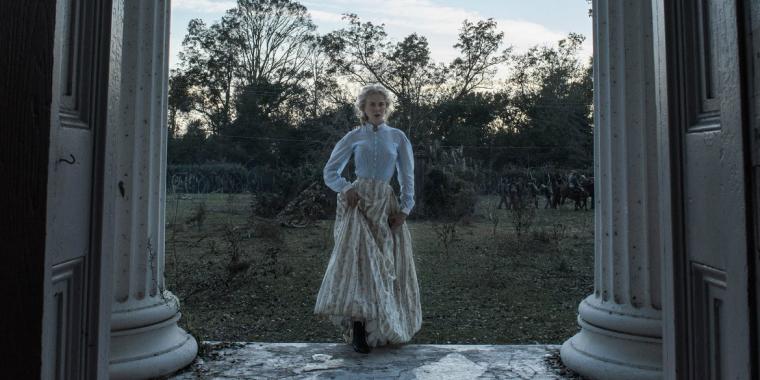 Nicole Kidman in The Beguiled.

The opening shot of writer/director Sofia Coppola’s meticulously sumptuous The Beguiled shows a young girl carrying a basket and singing without a care in the world – her steps providing the tune’s rhythm – in a tunnel of trees. It’s sunny out, but the converging crowns mean she’s walking in the dark wood. When she happens upon an injured Union soldier (Colin Farrell) while picking mushrooms, it’s impossible to avoid a single thought: Big Bad Wolf.

The girl helps the man back to her secluded Virginia boarding school for girls – which just happens to have seven female residents. They’re not dwarves, but Corporal John McBurney (once his wounded leg is mostly healed) does help with some groundskeeping. So he’s also Snow White.

In the oral tradition, the stories of Little Red Riding Hood, Snow White, and the like were often-horrific cautionary tales with latent sexual themes and symbols, and that’s the ground Coppola works here in a persistent Southern Gothic style.

The production design of the overgrown school is part of that, as is the soundscape: There’s virtually no musical score, and the air is filled with the sounds of nature and the distant (but not safely distant) Civil War. The heaviest lifting is done by cinematographer Philippe Le Sourd, who largely works in combinations of shadow, half-light, fog, candles, and sunsets. The stillness and isolation are oppressive, and the exterior gate of the school is often shot like it’s a jail.

I’m emphasizing the grim folk tales and atmosphere because they coat The Beguiled in an inescapable layer of dread. It’s an appropriate foreboding given the war and the threat of discovery: If the Confederate soldiers who occasionally pass by find McBurney, it would be disastrous not just for him but also the school’s headmistress and her essentially orphaned charges.

It also fits what Coppola is slyly working toward all along – which she keeps obscured until her final shot brings the movie into harmony with its tone. It’s ultimately satisfying, but it certainly doesn’t feel that way during the journey.

The movie seems almost intended to make audiences scratch their heads, and for that reason I’m going to talk about it rather than around it. This is a rigorous, tricky, and in many ways baffling work that demands some decoding.

The Beguiled is undoubtedly handsome, with myriad filmmaking and performance pleasures. But it’s so careful and measured in mood that it never lets itself – or the audience – submit to what should be its fundamentally juicy nature. The plot suggests two inherently enjoyable genre possibilities, yet the bleakness insists on something entirely different and seemingly incongruous.

At the screening I attended, numerous older patrons seemed to take the movie – initially, at least – as a comedy, with some justification. The headmistress Martha (Nicole Kidman) is visibly horrified at the prospect of washing the unconscious soldier’s genitals, yet she and the camera linger on his flesh with implied desire. The movie cuts away before the cleaning – a joke done through editing that suggests she quickly regained her propriety and has already blocked the repulsive act from memory.

Other seeds of bedroom farce keep popping up. McBurney, free from the war, seems nearly giddy to be the sole focus of so many members of the opposite sex – from girls to Kidman’s middle-aged woman. He takes what each of them gives him and runs with it.

Toward the wary Martha – who wants to be rid of her “unwelcome guest” as soon as possible – he’s gracious and deferential. Toward her unhappy helper Edwina (Kirsten Dunst), he’s solicitous and flattering. To the younger girls, he’s whatever they need – a brother or father to replace those they’ve lost. And he doesn’t exactly object to the affections of the blossoming Alicia (Elle Fanning).

The movie’s first half has a light touch with the sexual tension, and the flirtations and resentments seem low-grade and harmless. All of the school’s residents start wearing their better clothes. Kidman, Dunst, and Fanning are precise in their reactions, with each facial expression and reading articulating jealousy, gratification, or a lowering of resistance. Farrell acts like the luckiest guy alive, and his Union deserter clearly relishes his ability to manipulate the situation to extend his say well beyond convalescence. He’s just trying to avoid combat or prison, while they’re happy to be in the company of a man. When the hosts finally invite him to dine with them, dessert gives each of them the opportunity to try to win his favor: I made it; it’s my recipe; I picked the apples; apple pie is my favorite.

By the time it becomes clear that McBurney has too many balls in the air – as Dunst’s character prepares for a night visitor who will never come – any questions about his nature become mostly moot. At best, he’s an opportunist who’s gone too far, and nobody will escape the damage. While it’s never in much doubt that the interloper is more Big Bad Wolf predator than Snow White innocent, Farrell is warm and open enough to make his core decency at least a plausible outcome for much of the movie – an effective tool of suspense as we wait for the somber tone to poison the story.

To the extent that the movie resembles a thriller in outline, I’ve certainly said too much, but the label doesn’t really stick. It’s based on a novel by Thomas Cullinan and a 1971 film adaptation starring Clint Eastwood, and descriptions of both works often include the words “lurid” and “potboiler.” (The tagline for the Eastwood version was “One man ... seven women ... in a strange house!”)

In Coppola’s hands, however, neither term applies to The Beguiled. The solemnity promising tragedy drains much of the material’s drama, fun, and excitement, and the characters are less human than finely sketched types. Her admirably lean movie strips the story down to small, telling moments, and they’re sharp but unfortunately mostly functional – deliberately advancing a character or the plot.

Yet while it’s on the thin side and while its pall feels overly prescriptive, the saving grace is the way Martha and Kidman’s performance of her bring the story into alignment with its method.

Throughout the movie, Martha wavers in her resolution to send McBurney away. As he ingratiates himself with each resident, she noticeably (and predictably) softens. But she remains torn – seeing how fully this masculine presence has disrupted her tightly regimented school. You can see and hear her ambivalence in Kidman.

At the climax, however, she’s pushed from uncertainty and indulgence to decisiveness, and Coppola’s fatalistic scheme finally begins to reveal its purpose and theme. One could read Martha’s decisions as dictated by circumstance bred by poor choices, but there’s something darker going on as she finally recognizes the severity of the threat. Never has a command to fetch a book been quite so chilling, and never has a leg so clearly represented something else.

Throughout The Beguiled, every other motivation is blunt or easily discerned, and everybody acts impulsively toward selfish short-term goals. When the time for games has ended, however, Kidman suddenly turns opaquely resolute. There’s still a clear, simple purpose to her actions, but she’s also serving a larger aim: Chaos may reign outside, but there will be order within her gates.