Love on the Rocks, Love on the Walls: “The Broken Hearts Gallery” and “I'm Thinking of Ending Things” 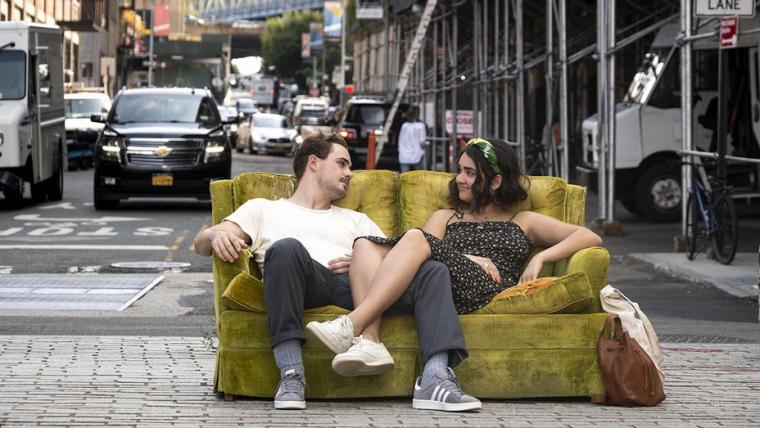 Dacre Montgomery and Geraldine Viswanathan in The Broken Hearts Gallery

As contemporary romantic comedies go, The Broken Hearts Gallery is like something you'd create from a kit. The instructions are easy to follow, every expected piece is dutifully included, and there's no veering from the manual – what you wind up getting looks remarkably similar to what's pictured on the box. (Or, in this case, the poster.) It's the sort of movie I'd ordinarily discuss in one moderately wordy paragraph. But a pandemic-era lack of cineplex options can make you inordinately grateful for simple, much-appreciated qualities such as charm and wit and personality, all of which writer/director Natalie Krinsky's debut feature has in abundance. So I'm not gonna toss the film off with one measly paragraph. I'm gonna give it five.

A wannabe art-gallery proprietor and chronic collector of worthless tchotchkes from past relationships, 20-something New Yorker Lucy (Geraldine Viswanathan) is miserably suffering through her latest breakup when she enters the car of wannabe hotel proprietor Nick (Dacre Montgomery), presuming him to be her Uber driver. He's not, and luckily for Lucy, instead of murdering her, the guy kindly listens to her tale of woe and brings her safely home. Friendship blossoms, and before you can say “Meet Cute!”, the two devise a plan to have Lucy – and, eventually, half of Manhattan – showcase romantic memorabilia in the lobby of Nick's under-construction Chloe Hotel, an inspiration that eventually captures the interest of New York magazine and Lucy's asshole ex Max (Utkarsh Ambudkar). Will the newly happy and confident Lucy be tempted to fall for the undeserving Max all over again? Will sad-eyed Nick ever realize that he's actually in love with Lucy? Will Lucy ever realize she loves him back? 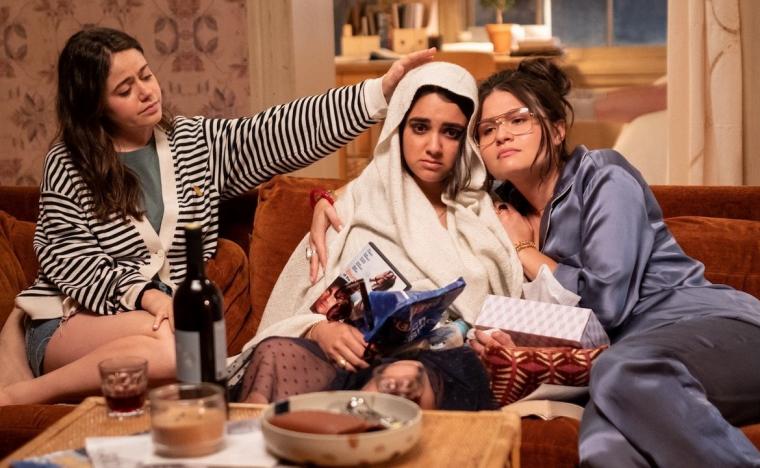 Unless you've somehow gone a lifetime without ever seeing a rom-com of The Broken Heart Gallery's type, you likely answered “yes” to all three questions. So here are a few more that you can readily answer in the affirmative. Will Lucy have a pair of well-meaning besties (Molly Gordon and Phillipa Soo) who'll provide consolation and counseling and sardonic wisecracks? Will Nick have a devoted, married bestie (Arturo Castro) to supply sensible advice and punchlines of his own? Will Lucy's art-gallery mentor be a prototypical Mean Boss who offers withering critiques and, inevitably, a measure of decency? (A question whose answer is less “yes” than “Yes!”: Will said mentor be played by Bernadette Peters?) Will Lucy have a sad secret from her past that makes Nick adore her all the more? Will Nick have a sad secret from his past that makes Lucy want to never see him again? Will the joyful montages be accompanied, on the soundtrack, by upbeat acoustic-pop numbers? Will the despondent montages be accompanied by downbeat acoustic ballads? Will the whole thing wrap up with one of our leads making a big speech in front of a large gaggle of listeners that includes nearly all of the film's introduced characters? Will that speech be interrupted by the other lead making a public declaration of love? Will it all end in kisses and applause? Will you be able to resist it?

Regarding that last query, I have to admit that my personal response was “no.” Barring the relative novelty in casting Viswanathan – an Australian of Indian-Swiss descent – as the star of a film wholly unconcerned with cultural identity (unless we count hoarder culture), there's absolutely nothing new about Krinsky's by-the-numbers plot. But I'm thinking we don't necessarily need, or even much want, new in our public-cineplex diets these days. It's enough, right now, to hope for the pleasures of the familiar, and the familiar pleasures in The Broken Hearts Gallery are copious indeed.

While her cheerful mugging and rapid-fire retorts are a lot to take at first, Viswanathan quickly establishes herself as a lovely, intelligent performer whose manic deliveries grow increasingly more delightful, and her hyper-alertness is nicely complemented by Montgomery's endearingly laid-back chill. From their first scenes together, these two feel like one of those classic odd couples whose gradual union makes perfect sense, and Krinsky's supporting bananas seem no less right for their roles. (I particularly enjoyed Castro, with his somewhat apologetic sarcasm, and Soo, whose performance as an acid-tongued lesbian is a comic revelation for those of us who only knew the actor as Lin-Manuel Miranda's wife in Hamilton.) The urban locales are appealing; the pacing is speedy; the pop-culture references – among them a devastatingly funny nod to Grey Gardens – are routinely hilarious. And it's all so smartly packaged and winning and comfortable that I felt no shame in getting misty-eyed during The Broken Hearts Gallery's devastatingly cornball finale, and was actually kind of thrilled for the chance to watch this TV-ready entertainment on the big screen. Fun fact: You can use your face mask to dry your tears and no one will ever notice. 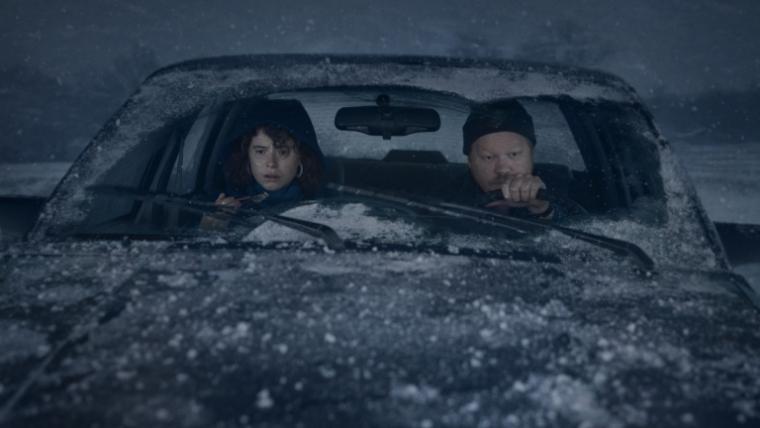 At a point of particular distress in The Broken Hearts Gallery, our heroine's roommates attempt to wordlessly cheer their pal up by bringing the bed-bound gal her post-breakup necessities, including a box of tissues, chips with ranch dressing, and a DVD of Eternal Sunshine of the Spotless Mind. That's a great millennial gag, and an oddly timely one considering that Eternal Sunshine's Oscar-winning scribe Charlie Kaufman just debuted his latest tale of awkward romance – the writer/director's I'm Thinking of Ending Things – on Netflix. Don't expect, however, any future rom-coms to feature a sobbing woman receiving this particular movie as a get-well gift. Unless, that is, the recipient's roomies secretly want their friend to kill herself.

That isn't a comment on the film's morbid title, which actually doesn't refer to suicide (at least not overtly), but rather a young woman's desire to escape the dead-end relationship she's found herself in. Based on Iain Reid's 2016 novel, I'm Thinking of Ending Things finds this young woman, played by Jessie Buckley, listed in the end credits merely as Young Woman … not unlike Russell Crowe's Man in Unhinged and John David Washington's Protagonist in Tenet. (Am I sensing a weird, pandemic-era motif regarding our collective loss of personal identity?) Young Woman is traveling by car with Jake, her boyfriend of six or seven weeks, and a figure of such pudgy, grubby inconsequence that he's inevitably portrayed by Jesse Plemons now that Philip Seymour Hoffman – the star of Kaufman's 2008 misery-fest Synecdoche, New York – isn't around to corner the market. (Said with the utmost respect, of course.)

Kaufman's movie is basically split into three chronological segments: the couple's road trip to visit Jake's parents (Toni Collette and David Thewlis), the visit itself, and the road trip home. Calling Kaufman's 130-minute narrative “simple,” though, would be like calling War & Peace a breezy beach-trip read. Because the conciseness of the movie's plot doesn't begin to account for its continual, and continually confounding, flourishes, which include characters changing ages – sometimes by many decades – at will; Jake addressing Young Woman by at least four different first names (she appears to have just as many careers); a pas de deux in a high-school hallway; and our frequent returns to an elderly janitor (Guy Boyd) with no apparent connection to the chief storyline. If Tenet exploded your brain, this thing will liquify it. 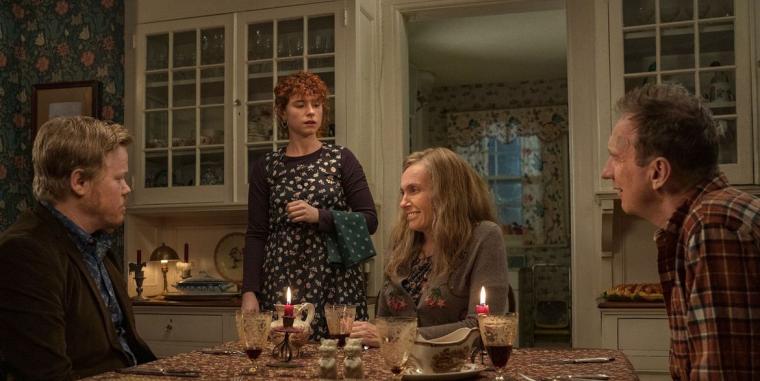 I'll be honest: I watched I'm Thinking of Ending Things twice. I'll be more honest: I watched it one-and-a-half times, as the combination of wintry landscapes, disconsolate interior monologues, repetitive windshield-wiper sound effects, and Jesse Plemons' mumbling knocked me out cold for a full hour upon a first attempt. (I like Plemons a lot, but he can be a world-class mumbler.) I'm glad I gave the film a second chance, however, because even though I didn't “enjoy” Kaufman's latest in any way corresponding to a good time, it's hands-down the most fascinating, challenging, onion-peeling work I've yet experienced in 2020.

And while, at present, I'm not sure I even like the movie, I already love loads of things about it: the visible and, I hope, intentional lack of chemistry between Buckley's and Plemons' lovers who have nothing left to say to one another; Collette's hysteria dovetailing with Thewlis' creepy chumminess; the tacky-looking rom-com (one “directed by Robert Zemeckis”) that invades both the film and Jake's vehicle; Young Woman's out-of-nowhere verbatim recitation of Pauline Kael's A Woman Under the Influence review delivered, seemingly, in Kael's own scratchy voice; the David Foster Wallace remembrance; the debate over the lyrics to “Baby, It's Cold Outside” (“It's a song about coercion!”); the alternately terrified and terrifying employees at the roadside ice-cream stand; the Nobel Prize performance of Oklahoma!'s “Lonely Room.” Hell, even the screenplay's basic construction is an engrossing puzzle once you realize that our presumed protagonist isn't the movie's most central figure – and maybe not even its second-most. I'm Thinking of Ending Things is perplexing. It's frustrating. Fine: It's quite often maddening. But it isn't entirely inscrutable, and the mysteries it generates feel legitimately worth wrestling with. I'm already antsy to watch it again. At least one-and-a-half more times.