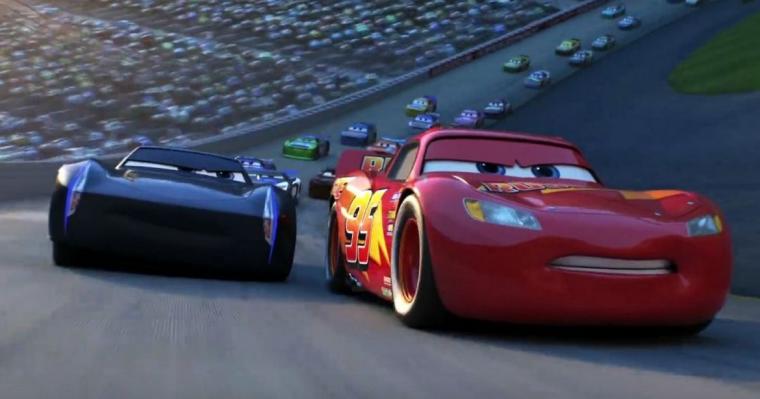 If asked to list Pixar features I felt more deserving of a second sequel than 2006’s Cars, I’d offer a simple “all of ’em except The Good Dinosaur.” So maybe it was low expectations that allowed me to find Cars 3 the best of its bunch, and by a considerable margin, to boot. In no important ways does the film veer far from what made crowds – other crowds – adore the first two. It’s still a vehicles-only world; it’s still a “You can do it!” world; it’s still a world, for better or worse, with a buck-toothed tow truck voiced by Larry the Cable Guy. In director/co-writer Brian Fee’s hands, however, Cars 3 also exists in a happily satisfying, if fundamentally predictable, Pixar-ian universe that smartly addresses the discomforts of aging, that’s honestly touching, and that delivered a personal miracle in vocal performer Cristela Alonzo, who did the previously unfathomable in a Cars movie: She made me laugh out loud.

After the fish-out-of-water high jinks of Cars, and the strange, if randomly amusing, baby Bond of Cars 2, this new offering finds an older, slower Lightning McQueen having to face a vainglorious young upstart while a feisty trainer hopes to whip him into shape for a career-reviving (and potentially career-ending) race. It is, in short, 1990’s Tom Cruise vehicle Days of Thunder – and with Alonzo’s trainer actually named Cruz – blended with any Rocky sequel of your choosing. It’s also rather sweet. Even though the plot finds Lightning, yet again, shamed into becoming less of a hotshot and treating others with respect, there’s something newly endearing about how his same character failings keep popping up in film after film; Lightning has become the animated Woody Allen of re-learning movie morals. (It now seems both fitting and inevitable that the character is voiced by Woody’s Midnight in Paris surrogate Owen Wilson.) The script features entertaining detours – particularly when Lightning and Cruz take part in a demolition derby – that display more filmmaking excitement than this franchise had previously delivered. Randy Newman’s score, reminiscent of his lump-in-the-throat contributions to The Natural, is one of his most stirring in years. Meanwhile, I’ll always wish the Cars cars were more expressive than the bug-eyes-and-chrome they are, but at least they’re energetically voiced, with special praise reserved for series newcomers Nathan Fillion, Armie Hammer, Chris Cooper and Margo Martindale (an August: Osage County reunion!), and the adorable, comically aggressive Alonzo. I liked Cars 3 a lot. And I loved it when we were briefly treated to the tender growl of the late Paul Newman, whose mentor figure Doc Hudson, we learn, didn’t go by “Doc” in his youth. He went by “Hud.” Pixar’s latest may not win Oscars, but the award for “Best Movie-Lover In-Joke” is officially sewn up. 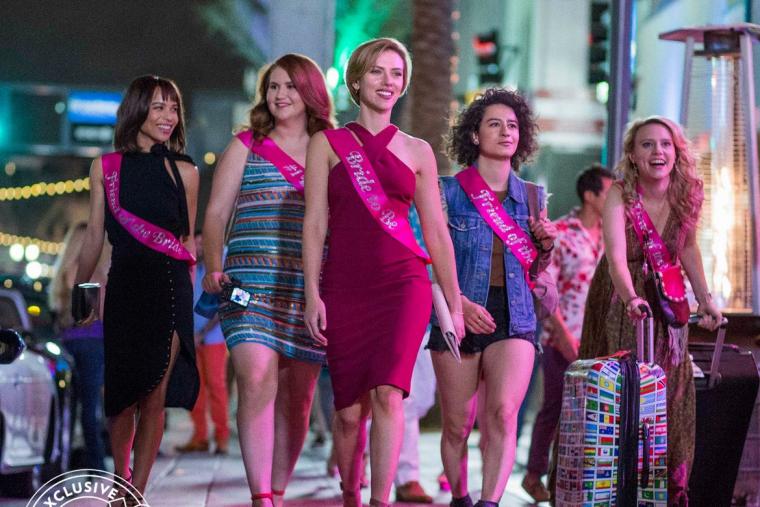 Considering that the slapstick gross-out Rough Night is the tale of a bachelorette weekend gone horribly awry and the invited guests are the fearless and committed Scarlett Johansson, Jillian Bell, Zoë Kravitz, Ilana Grazer, and Kate McKinnon, it seems almost perverse that director/co-writer Lucia Aniello’s movie should be stolen by a couple of dudes. But here we are. Our comedic quintet is sharp, game, and (despite the bum gags) frequently funny, and what tickled me most were the heartbroken groom-to-be in the adult diaper and the dead male stripper who out-Bernies the Weekend at Bernie’s corpse. Nobody said comedy was fair.

The film itself, it should be stressed, isn’t great. Basically, it’s just a rehash of 1998’s Very Bad Things with the genders swapped, and the earlier work’s escalating ugliness replaced by goofiness, mild bestie sniping, and eventual hugs. (I’m also going to continue railing against this particular cliché until it dies, but when the gals first arrive in Miami, the soundtrack immediately cuts to – you guessed it – Gloria Estefan’s “Conga.” Come on, Hollywood! The woman had other hits!) But the performers make it an easy sit. Johansson has been alternating between super-heroics and minimalism for so long now that it’s a pleasure seeing her human-scaled and silly; an early campaign commercial for her character’s state-Senate run, her smile indistinguishable from an aborted sneeze, reminds us what a droll, winning comedian Johannson can be. Bell is a slightly toned-down version of one of Rebel Wilson’s brazen lushes, and Kravitz and Grazer aren’t allowed even that much personality, but all three have terrific moments. (Kravitz is superb when, for plot purposes, she succumbs to the advances of grossly inappropriate swingers portrayed by an enticingly icky Ty Burrell and Demi Moore.) As for McKinnon, doubling down with a wicked Australian accent, it’s really too early in her screen career for me to have run out of superlatives. Can we just call her “genius until further notice”?

Yet even the incomparable McKinnon nearly gets sidelined here by the hilarious dead-body acting of Ryan Cooper, whose physically witty turn makes you wish the gals found even more uses for his cadaver. And Aniello’s comedy is at its absolute finest in the scenes with co-writer Paul W. Downs as Johansson’s loving fiancé, primarily because they boast much-needed surprise; we’ve seen all of the ladies’ screen types before, but have never been introduced to anyone quite like him. Whether fainting with distress when he thinks his wedding is off or embarking on a winning-her-back road trip high on Red Bull and expired Russian Adderall, Downs is a hugely unexpected treat, with his own bachelor party – a quiet evening of red wines and soft cheeses – a subtle riot. When ordered by his equally sensitive bros to go get his girl, they delicately remind him, “You’re a six, and she’s a 20,” which is unfair. In Rough Night, Downs is definitely a 10. But yeah, Johansson’s still a 20.

For reviews of All Eyez on Me and 47 Meters Down, visit “A Bum Rap.”