Laughs in the Time of COVID: Five Cackle-Inducing Movies from More Than 20 Years Ago 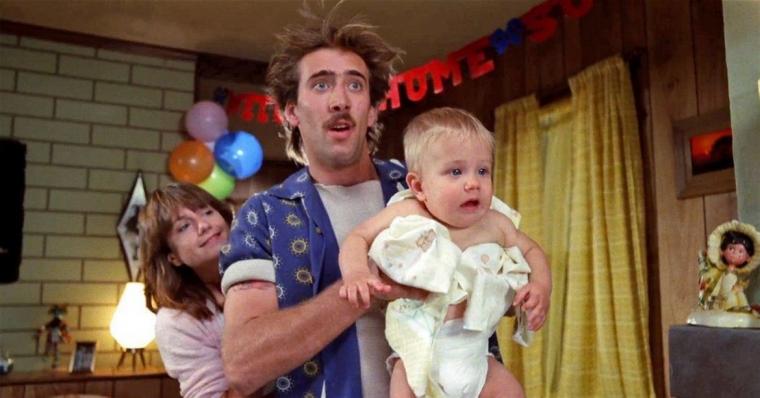 Plenty of 21st-century movie comedies continue to make me laugh out loud even after numerous visits: Superbad, Easy A, Game Night. And I adore loads upon loads of comedies released well before 2000, even if, after a lifetime of repeat exposure, they no longer inspire audible reactions: All About Eve, Young Frankenstein, Annie Hall, Monty Python & the Holy Grail, Tootsie.

But it takes a truly special work of comedic art to keep me cackling more than two decades after the initial surprise of their jokes. Here are five home-viewing options that, through their promise of always delivering sustained vocal pleasure, have routinely kept me from, ya know, reading War & Peace or something … . 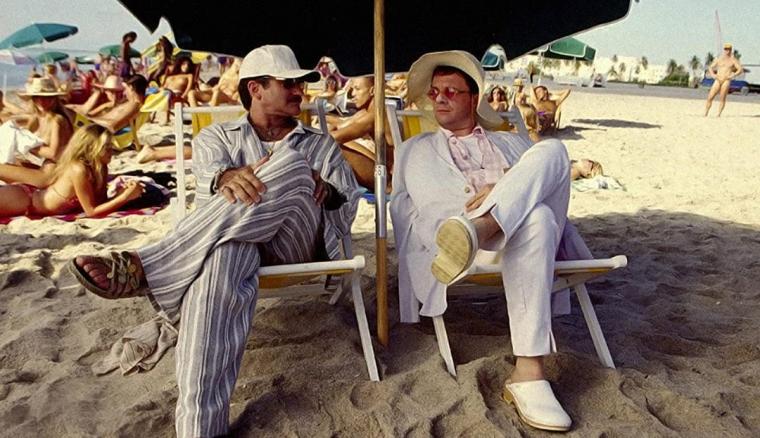 The Birdcage: Viewed now from our more enlightened cultural vantage point, the grand romantic gesture in this 1996 comedy – a same-sex couple signing a palimony agreement – can't help but come across as … not terribly romantic? A little soulless, even? Yet while that plot point has dated badly, as has the bit involving the teenage prostitute, what remains as fresh as ever is the astounding comedic rapport of Mike Nichols' ensemble, the director's superb guidance of performance rhythms, and the loopy bravado of Elaine May's endlessly quotable script. (“I see. You're going to the cemetery with your toothbrush. How Egyptian.”) Based on the 1978 French farce La Cage Aux Folles that became a Tony-dominating musical smash, Nichols' remake set in gloriously gaudy South Beach, Florida was a substantial box-office hit that never quite garnered the critical acclaim it deserved. But 24 years later, this constant riot remains as polished and assured as any movie slapstick since 1959's Some Like It Hot, with the lengthy dinner-party sequence a master-class showcase for Nichols' impeccable timing – watch and listen as the host circles the table and his soup ladle hits the bottom of the tureen at precisely the right moment – and the instinctive comic mastery of Robin Williams, Nathan Lane, Gene Hackman, Dianne Wiest, Dan Futterman, a pre-Ally McBeal Calista Flockhart, and that indispensable genius Hank Azaria. Estimating that I've seen The Birdcage about five times a year since it was released (and that's probably a seriously low estimate), more than 100 viewings have done nothing to temper my audible giddiness at Williams' solo dance combo, or Lane's attempts to walk like John Wayne, or Hackman's road-trip reminiscence that just won't end ... . Great. Now I need to watch the movie again. 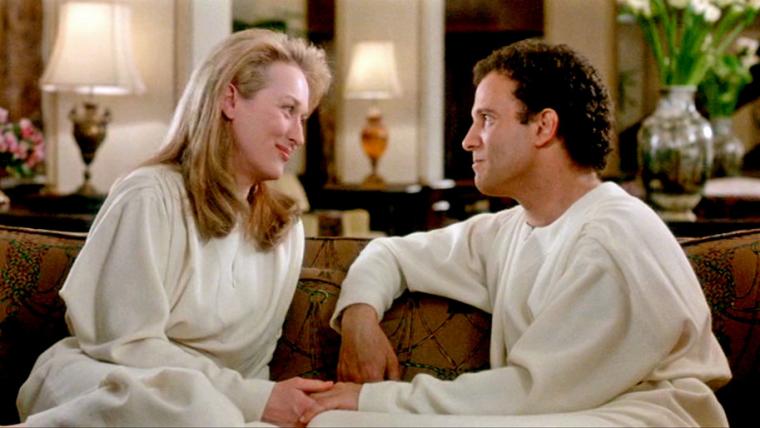 Defending Your Life: Because Meryl Streep can do absolutely anything, it's no surprise that she's typically wonderful in this 1991 Albert Brooks comedy as a character who may as well be named Saintly Girlfriend: a late wife and mother (her actual name is Julia) whom Brooks' similarly deceased Daniel Miller meets in the afterlife and is too afraid to fall fully in love with. Leave it to Streep, though, to score laugh after laugh through the simple act of laughing; Julia's full-throated cackles and delirious snorts in response to David's witticisms are so infectious that you spend a major portion of the performer's screen time just giggling at her giggling. (She's also, as usual, an ace comedian in her own right, and the way Streep hits the word “Sizzler” in an early punchline makes me chuckle even after dozens of viewings.) But the movie has another comedic ace-in-the-hole, and even with the film's lead as blissfully, neurotically animated as you could want, it isn't Brooks – it's Rip Torn, who plays David's otherworldly “defense attorney” Arthur in what amounts to a smashing de facto audition for his six magnificent seasons on The Larry Sanders Show. Torn's got a killer laugh, too, which he memorably unleashes when David samples his lawyer's “smart people” lunch. (“Tastes a little like horse shit, huh?”) Yet in a film flush with incidental pleasures – the sushi chefs' incredulous response to David's nine-day tenure, the overzealous Italian-restaurant waiter, Buck Henry's lawyer of few words (“I'm fine”), Shirley MacLaine – Torn is the biggest gut-busting pleasure of them all, always believable yet ferociously hysterical in a three-martini-lunch sort of way. As Arthur curtly yet kindly tells David: “Wrap it up.” I'll do the same. Just see the movie. Or see it again. 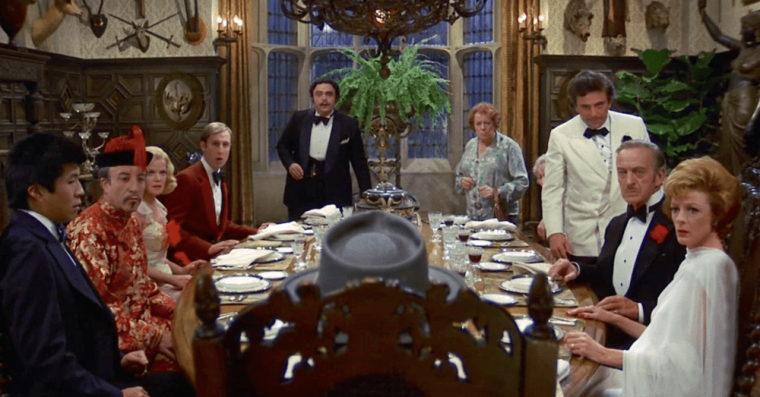 Murder by Death: I've gone on-record numerous times admitting that among comedy playwrights and screenwriters, Neil Simon isn't generally my cup of tea. (This from a guy who has acted, and had a ball, in two of the author's plays.) And even though I adore Murder by Death, director Robert Moore's 1976 Agatha Christie spoof in which the world's greatest detectives attempt to find a murderer in their midst, I'll concede that Simon's script is its lamest element, saddled as it is with easy puns, obvious references, and a narrative that doesn't even try to make sense. I don't care. I've been roaring at the priceless line readings of Peter Falk, Maggie Smith, Eileen Brennan, Alec Guinness, and the film's other sleuths and stooges since I was 10, and I ain't about to stop now. We can likely all agree that Peter Sellers' casting as a Charlie Chan figure hasn't aged altogether well. But if you catch them at the right moments in your life, some movies can continue to affect you the same way all through the decades. And Simon's and Moore's broad farce hits me in my silly sweet spot every single time, causing me to nearly double over at routines and lines I've had committed to memory forever: Guinness' and David Niven's verbal duel over the butler's surname “Bensonmum”; James Coco testing a blind man through his collection of “funniest faces”; Smith demanding to know “Where's my Dickie?” Best of all are Falk as a tough-talking gumshoe and Brennan as his Gal Friday, both of whom could have popped directly out of a Dashiell Hammett noir – or at least one in which the manly-man detective gets the last word with a prissily delivered “Bitch.” 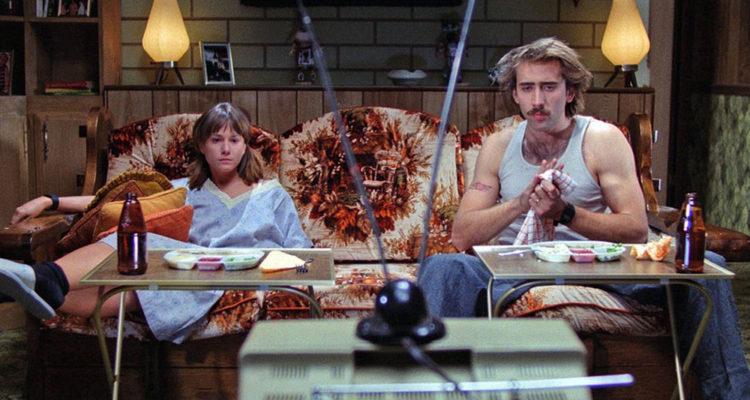 Raising Arizona: Please indulge me as I offer a long-delayed apology to my Intro to Philosophy professor from the spring of 1987: Sorry I missed your class those four times in two weeks, but friends and I were at the movies watching Raising Arizona, and we truly believed we were learning more valuable life lessons from the Coen brothers than we were from Plato. Missing from that apology, of course, is any sense that I was also laughing my ass off at all four of those screenings, and 33 years later, the Coens' rib-tickling farce involving the abduction of an adorable quintuplet for wrong-headed but bighearted reasons still gets me giggling every time I view it. As evidenced by 2016's Hail, Caesar! and a couple vignettes in 2018's The Ballad of Buster Scruggs, Joel and Ethan are among precious few A-list, Oscar-winning directors who haven't wholly abandoned slapstick for more serious fare. But the writer/directors have never been verbally funnier or visually friskier than they were with their sophomore release, a sun-drenched comedy of helpless baby love whose most mirthful scene can be successfully narrowed down to Nathan Arizona's cranky press conference, our hero's extended race through suburban dwellings and a brightly lit supermarket, the speedy disposal of a bystander bunny, or any of dozens of sequences in between. The frenzied shenanigans are made all the more riotous by Holly Hunter as the unspeakably happy new mom (“I love him so-o-o-o mu-u-u-u-uch!!!”), John Goodman and William Forsythe as blubbery hayseed felons, Frances McDormand offering hints as to just how formidable a performer she'd become, and especially Nicolas Cage, who delivers what remains the most hilarious, and maybe most soulful, performance of his career. He should've won Best Actor. His hair should've won Best Supporting. 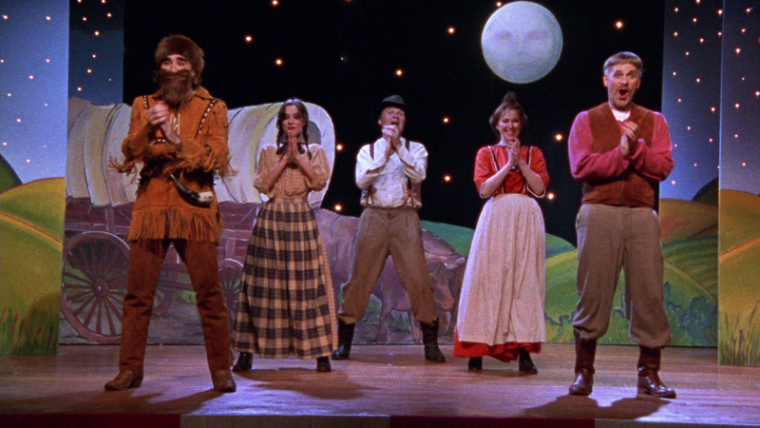 Waiting for Guffman: I've acted in 50-plus plays and musicals since Christopher Guest's mockumentary classic debuted in 1997, and from the moment we theatre folk caught up with it, I don't think a single opening day has passed in which one of my castmates or I didn't turn to someone and share the timeless words of the divinely deadpan Parker Posey: “It's the day of the show, y'all.” Unless you're a Guffman fan, that sentence won't mean much, and certainly won't be funny. In context, though, it never ceases to crack me up, and I defy anyone, stage experience be damned, to not crack up at Guest's and co-writer Eugene Levy's loving, joyous skewering of small-town community-theatre types. The first in his series of vastly populated ensemble comedies that includes 2000's terrific Best in Show and 2003's sublime A Mighty Wind, Guest's send-up boasts a higher gag-per-minute ratio than any of the others, with Fred Willard's and Catherine O'Hara's “Midnight at the Oasis” audition, Bob Balaban's inscrutable music direction, and Jerry Turman's misguided Raging Bull duologue (“You f--- my wife?” “What?” “You f--- my wife?!”) among its many satiric home runs. But the primary reason I've been cackling at Guest's 80 minutes of perfection for 23 years is Guest himself in his iconic role as Corky St. Clair, a wannabe Fosse-in-a-pageboy so endearingly clueless, and so prone to volcanic hissy fits, that you treasure his every moment on-screen. Corky's Red, White, & Blaine! duet with Posey, “A Penny for Your Thoughts,” is almost too sweet to be believed. His eruptions, meanwhile, are unforgettable. All together now: “Then I just hate you! And I hate your Ass! Face!!!”