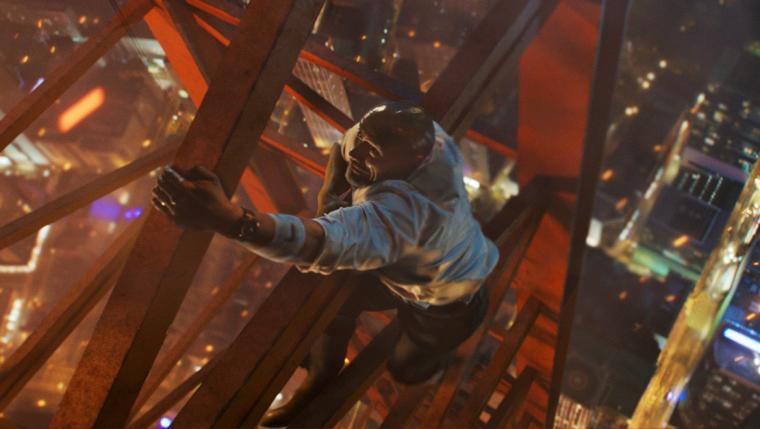 In the final minutes of the new Skyscraper, a disaster-movie-cum-action-thriller starring Dwayne Johnson, you will hear both these lines.

I'd like to believe their inclusion was intentional – a knowing wink to genre fans – on the part of writer/director Rawson Marshall Thurber, especially considering his 2016 Central Intelligence, also starring Johnson, was an occasionally hilarious flip on action-comedy conventions. But nothing about the deliveries of, or context behind, Skyscraper's “Rebuild” and “Let's go home” suggest anything but absolute sincerity, which makes hearing them at the finale both embarrassing and more than a little insulting. I recently stumbled on a description of the film's plot as “Die Hard meets The Towering Inferno in China,” and that's really the only description required. Couldn't Thurber, though, have taken his laughably flimsy, high-concept pitch and at least owned up to its silliness, the way Roland Emmerich did in 2013's nut-job classic White House Down? Skyscraper is less funny than either Die Hard or Towering Inferno, given that the movie is almost criminally bereft of jokes and entertaining fringe figures and is too serious-minded to be enjoyed as camp. But what's worse is that it isn't funny at all. When Johnson, traversing the thin ledge of a high-rise exterior, says “This is stupid,” you don't chuckle at the admitted ludicrousness so much as offer silent praise that someone on-screen finally said something sensible.

After a boilerplate Thematically Important Prelude showing how Johnson's FBI agent Will Sawyer became a former FBI agent (because of course), the action swiftly shifts to Hong Kong (because international-box-office of course), where Sawyer is interviewing for a job as a security analyst for the world's newest, tallest, and hands-down-ugliest skyscraper. A miles-high, self-contained city complete with residential housing, shopping centers, a botanical garden, and a bizarre globe that functions, I guess, as some sort of tourist-trap hall of mirrors, the downtown monstrosity is said to be impervious to terrorist takeover and fires – meaning, of course, that terrorists will soon be taking over and setting the building on fire. It's consequently up to Johnson, in all his The-Rock-ness, to foil the heavily accented villains while saving his family (wife Neve Campbell, twin children McKenna Roberts and Noah Cottrell) from fiery deaths. Oh yes, and Sawyer has a prosthetic steel leg that threatens to detach itself during moments of high peril. Sounds dopey as hell, sure, but also kind of fun, right? 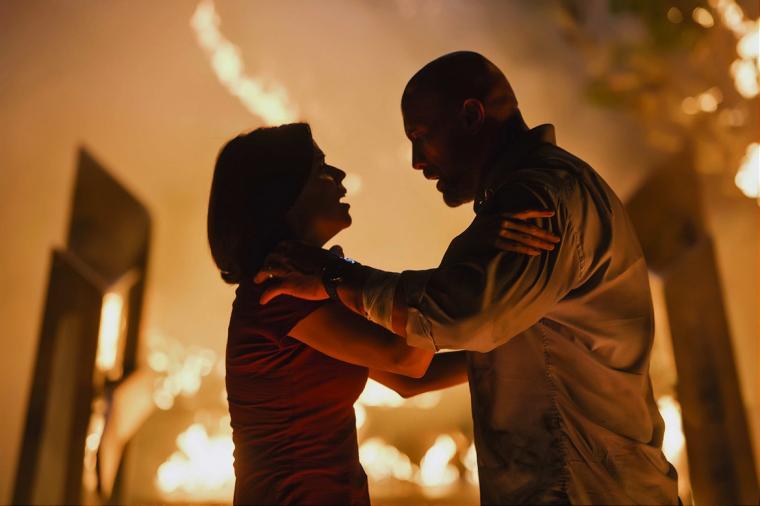 Maybe it would've been, at least for me, if the film didn't feel so weirdly empty. Granted, Johnson is an enormous screen presence in all senses of the term, and so naturally charismatic that he can single-handedly hold your attention even in thunderously witless vehicles such as Rampage and Baywatch. But once the middle floor of Skyscraper's skyscraper catches fire, we watch as everyone in the building below that floor is safely evacuated from the premises. And we know from the start that the only people housed above that floor, barring the hordes of terrorists, are Sawyer's wife and kids. So perhaps Thurber's choice to so thoroughly de-populate the proceedings is an unacknowledged apology for Johnson's chopper pilot, in San Andreas, abandoning the welfare of thousands in singleminded pursuit of rescuing his ex-wife and daughter; this time, there are no faceless masses for the guy to be accused of not caring about.

It also means, however, that there's precious little actually happening in between Sawyer's attempts to save his family and his family's waiting to be saved. Excepting the mostly interchangeable terrorists and a handful of peripheral Chinese figures played by wasted talents including Chin Han and Byron Mann, we get little reprieve from the movie's blandly hero-centric focus; it's like watching Die Hard after someone edited out all the scenes with Sergeant Al, the limo driver, and that asshole reporter. (It should go without saying that we don't get a Hans Gruber, either, though you can hardly fault Danish actor Roland Møller for not boasting the peerless suaveness of Alan Rickman.) There just isn't enough variety of personality to sustain 100 minutes of Skyscraper's mostly green-screen effects – lit by There Will Be Blood cinematographer Robert Elswitt, for Pete's sake! – and there isn't enough variety in the effects, either. Once you've seen Dwayne Johnson climb one imposing set of steel girders, or make one miraculous leap thousands of feet in the air, or duct-tape one of the many gashes in his skin, you've pretty much seen 'em all.

Admittedly, I was relieved to see Campbell, who's quite good here, allowed to do more than simply act as the requisite damsel in distress – though she does, natch, also have to endure the genre's token gal-on-gal slugfest with the genre's token female terrorist (Hannah Quinlivan). And while the globed enclave makes sense only as a tourist destination for the very easily amused, the hall-of-mirrors finale that echoes the most famous sequence from Orson Welles' 1947 The Lady from Shanghai is good for some mild diversion, despite the locale having made more narrative sense when it was employed for Woody Allen's Manhattan Murder Mystery. Yet the end result is still almost unremittingly tedious, both in its solemn sleepwalking through traditional action beats and in its presentation of early signifiers – A child in distress! A rescue gone wrong! A spouse who can't work a cell phone! – that you just know are merely being employed for eventual, predictable resurrection at the end. The signature image in Skyscraper's marketing is that of Dwayne Johnson barely holding on by his fingertips, and in terms of keeping this thing watchable, that's kind of what he's doing all throughout the film. 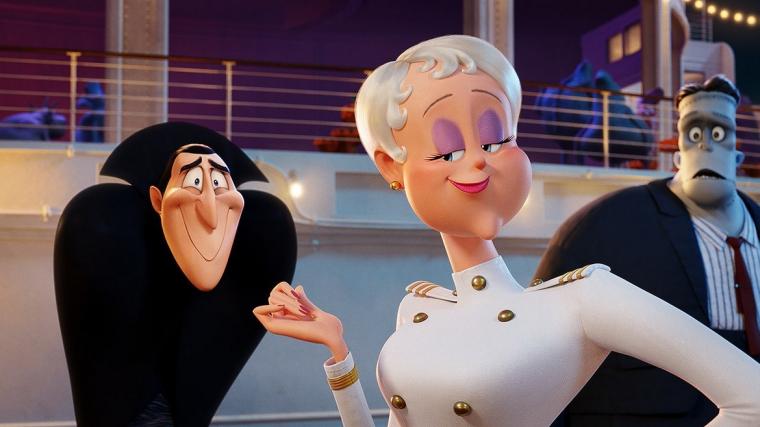 When Adam Sandler made his multi-million-dollar deal with Netflix several years back, I almost wept with joy knowing that I wouldn't have to review any of the man's generally hideous comedies again for at least the length of his contract. [I happily made an exception, on my 10-favorites list, for Noah Baumbach's glorious The Meyerowitz Stories (New & Selected) last year, but that one is so good that it barely qualifies as an Adam Sandler movie.) Yet I was actually happy, or rather happy-ish, that Hotel Transylvania 3: Summer Vacation wasn't relegated to the streaming service, because I don't think I would have bothered with it if it was, and director Genndy Tartakovsky's animated family comedy proves just as amiably pleasant as his previous two.

This time Dracula, the family, and the whole monstrous gang are on a cruise ship captained by Van Helsing's vengeful great-granddaughter (voiced, with surprisingly little distinction, by the great Kathryn Hahn), and it's really just more of the same, but on a boat. That “same,” however, is still largely winning, with the time-wasting routines and awkward sentiment offset by loads of brightly colored, fast-moving antics and clever visual gags. I particularly dug the deranged lunacy aboard Gremlin Air and the whirlwind of werewolves that followed Steve Buscemi's Wayne wherever he went, and adored the vocal casting of Chris Parnell as every single ocean-liner employee – variants on one fish standing on its tail and consequently forced to look forever heavenward. A so-so comedy with unnecessarily (and blessedly) lavish visuals, Hotel Transylvania 3 is perfectly harmless, genial stuff, and winds up delivering the most unexpectedly essential employment of the Macarena in film history. Not that the competition was ever that stiff.