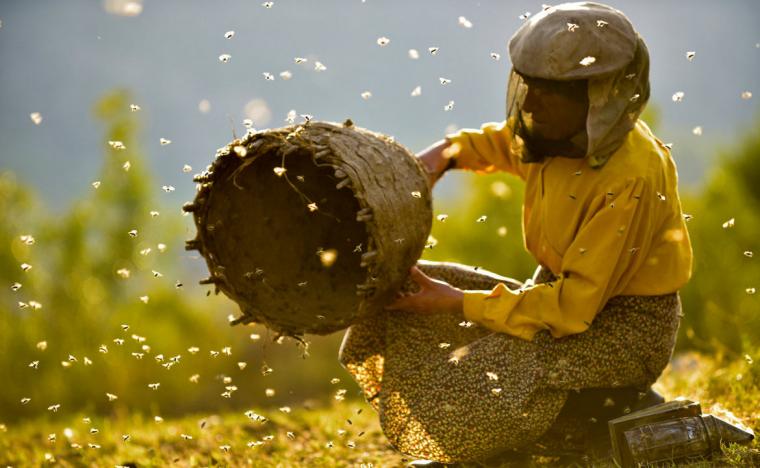 Honeyland documents the life of Hatidže Muratova, a Macedonian beekeeper of Turkish descent who lives in the village of Bekirlija in the municipality of Lozovo. Due to its location in a secluded mountain, the village has no access to electricity and running water, and Hatidže lives there with her 85-year-old, partly blind and bedridden mother Nazife, who is completely dependent on her daughter. Hatidže earns a living by selling honey in the country's capital Skopje, which is four hours away from the village. But the atmosphere in the village changes when the nomadic rancher Hussein Sam arrives with his wife Ljutvie, their seven children, and their imported domestic animals.

Described by The Atlantic as “a rare nature documentary that's deeply personal” and by the Los Angeles Times as the rare fil that serves as an “intimately infuriating, methodically detailed allegory of the earth's wonders being ravaged by the consequences of human greed,” Honeyland took three years to complete, and 400 hours of footage was filmed. The directors stated that they primarily focused on the visual aspects and wanted to portray humanity's balance with the ecosystem through Hatidže, while consumerism and resource depletion were depicted through her neighbors. Beyond its historic Oscar nominations, Honeyland was the most awarded film at the 2019 Sundance Film Festival, winning the World Cinema Grand Jury Prize, a Special Jury Award for Cinematography, and another Special Jury Award for Originality. In a survey of over 300 international critics conducted by IndieWire magazine, the film was also ranked as the third-best documentary and twelfth-best foreign film of 2019. Meanwhile, on the review aggregator Metacritic, Honeyland was ranked as the 24th-best film of 2019, appearing on 23 critics' year-end top-10 lists and ranking first in three of them.

River Action's Blue Grass Drive-in screening of Honeyland on September 20 begins at sunset, and more information on the event and the QC Environmental Film Series is available by calling (563)322-2969 or visiting RiverAction.org.