Iron Man is sarcastic. Thor is arrogant. Hulk is ill-tempered. Captain America is patriotic to a fault. And Captain Marvel, a.k.a. the human Carol Danvers, a.k.a. the alien Vers, is … female. At least, that felt like the chief takeaway from Captain Marvel, whose filmmakers and star have given us a perfectly respectable comic-book role model while neglecting to make her in any way interesting.

It's hardly nothing that the 21st (!) movie in the Marvel Cinematic Universe dating back to 2008 finally boasts a headliner with two X chromosomes – not including the secondary lead in last year's Ant-Man & the Wasp – nor is it immaterial that this is the first of Marvel Studios' adaptations to feature a woman as one of its directors. (The milestone might have seemed even more historic were Anna Boden not sharing credit with her longtime professional and romantic partner Ryan Fleck.) But while I'll never line up with certain Internet Movie Database and Rotten Tomatoes cretins who've found it necessary, or maybe just a mean-spirited kick, to sabotage the film's user ratings out of misogynistic spite, the haters aren't entirely wrong. While I was initially psyched about Marvel treating us to its long-overdue answer to Wonder Woman and generally adore Captain Marvel portrayer Brie Larson (though not necessarily in this role), I have to admit that Boden's and Fleck's outing ranks in the lower tier of those 21 MCU releases. The movie is occasionally diverting, yes, but also distractingly forced and traditional, and despite its equal-opportunity bona fides, almost perversely unmemorable.

It was easy to be jazzed by the Captain Marvel trailer that found Larson's space invader Vers (pronounced "veers") crash-landing through the roof of a Blockbuster Video store in 1995 Los Angeles before eventually teaming up with Samuel L. Jackson's S.H.I.E.L.D. agent Nick Fury, the latter sporting two functional eyes. (Through some impressive visual trickery, the 70-year-old Jackson now looks the way he did in Pulp Fiction, albeit without the Jheri curl.) But before we get to that happy encounter, Boden's and Fleck's film begins with blandly imagined intergalactic warfare in which we learn of the ongoing struggle between the Kree, a race of purportedly righteous warriors, and the Skrull, a race of purported psychopaths resembling pissed-off versions of Shrek. (The Skrull can also assume the exact physical forms and voices of others, suggesting an entire civilization populated by mask-toting Ethan Hunts from the Mission: Impossible franchise.) 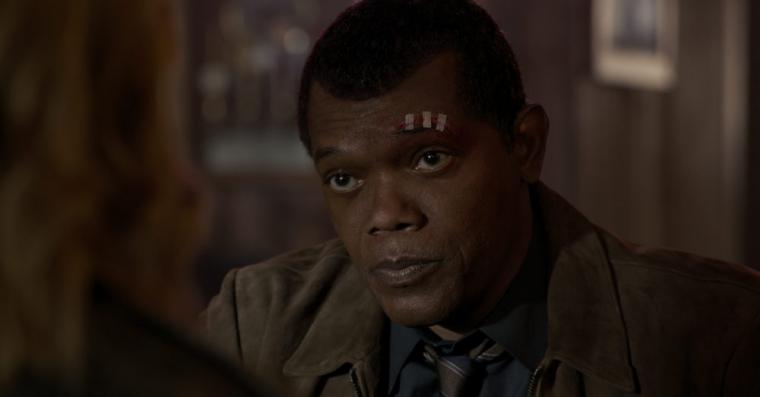 Plagued with lost memories and a growing sense that she might not be a Kree herself – a suspicion that would've been proven had the woman noticed that she was the only Kree whose eyes didn't look like the Cheshire Cat's – Vers escapes Krull capture and high-tails it to Earth, where war wages for possession of an unlimited energy source known as the Tesseract. If you're a longtime Marvel fan who's eagerly awaiting the release of Avengers: Endgame in six weeks' time, you'll know precisely what that is and why it's important. If you're not … it's not all that important. By which I mean it's not important to Captain Marvel as a stand-alone experience. And the most dispiriting thing about this latest big-screen comic book is that it's so fundamentally underwhelming in the basics of character, humor, emotion, and invention that it's barely any fun on its own, let alone as an enticing fringe inclusion in Marvel's much larger, capitalized Universe.

From the moment Vers finds herself in that now-rubble-filled Blockbuster standing amidst the “Family” and “Drama” aisles, you rightly expect Captain Marvel to turn, at least for a while, into a fish-out-of-water comedy in the manner of Kenneth Branagh's 2011 Thor. Sadly, though, there's no “I need a horse!” equivalent to be found – not even close. Vers struggles mildly with pay phones and dial-up Internet the way we all did, yet nothing about her demeanor suggests real frustration with mid-'90s inconveniences on Earth; she arrived presuming that our planet would be backward and slow, and it is. The jokey signifiers of the era – VHS tapes, pagers, Nine Inch Nails T-shirts – are there for our benefit, not our heroine's, and they're so inconsequential to the story that the movie could've just as easily been set a few weeks before Tony Stark, in 2008, made his his fateful “I am Iron Man” pronouncement.

The more troubling issue, however, is that Vers' demeanor, just like Larson's capable yet oddly empty performance, doesn't suggest much of anything. As a Marvel Studios crime-fighter, Captain Marvel's lead is certainly well-versed in the delivery of offhanded sardonic retorts; listening to Vers' and Fury's overly practiced banter that kicks into high gear immediately after their introduction is like sitting through a 1995 sit-com without its laugh track. But Vers herself has no personality – or rather, no personality that doesn't seem like a mere extension of Brie Larson's. To be sure, that's partly intentional, given that Vers' memory loss makes her unable to remember her life as the American fighter pilot Carol Danvers whom we occasionally glimpse in flashback. For most of her screen time, though, Larson's portrayal is one long arched eyebrow, either raised quizzically in response to something Vers doesn't understand, or defiantly in response to someone – okay, some man – who fails to appreciate her power. (Vers' super-powers, by the way, are left annoyingly undefined, and all we know for sure is that she's strong, and can float, and can shoot torrents of pure energy out of her body … or something … .) She's even void of interior life in scenes with her Earthling bestie Maria (Lashana Lynch), and when, literally glowing with newfound strength, the freshly costumed Captain Marvel kicks climactic ass accompanied by No Doubt's “Just a Girl” on the soundtrack, it felt depressingly inevitable. Just a girl indeed. 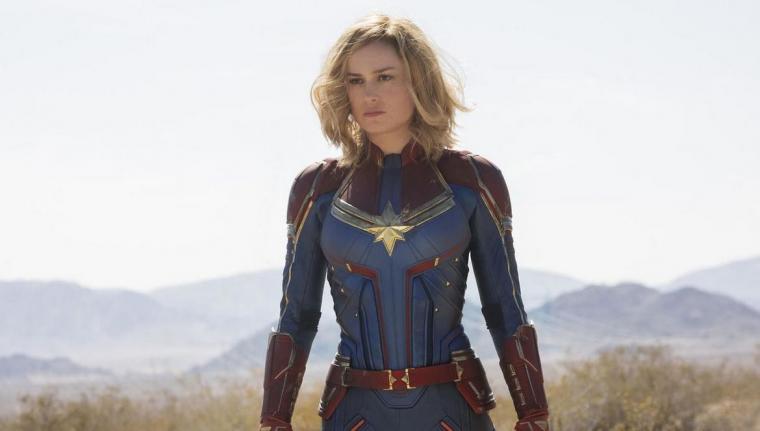 Heaven knows that Oscar winner Larson could've played this role with more complexity and mystery, just as Boden and Fleck, sharing screenwriting duties with Geneva Robertson-Dworet, could've likely fashioned an origin saga that wasn't quite so beholden to Marvel-property formula. (The indie filmmakers' résumé includes Ryan Gosling's 2006 breakout Half Nelson and 2009's uniquely personal baseball drama Sugar.) Yet beyond the novelty of it being female-driven, Captain Marvel is nearly all formula, complete with narratively meaningless blasts of destruction, cornball jokes, portentous threats of world-ending, scores of Easter eggs – including the rather off-putting return of an age-reversed Clark Gregg – for Avengers fanatics, and perhaps the least surprising turncoat reveal in the history of the MCU. The effects, meanwhile, tend to be on the liquid-metal side of CGI cheese. I'd call that another kind of mid-90s nod, but if it's a joke, it's lacking a discernible punchline.

Thankfully, however, we also get Annette Bening, and Jude Law, and Ben Mendelsohn, an actor I don't usually care for who, after his Sheriff of Nottingham in last fall's dismal Robin Hood reboot, is now two-for-two at being the finest thing in a profoundly disappointing movie. (Mendelsohn's Cockney readings are pretty damned funny coming from behind his character's Green Goblin visage.) Plus, there's a tubby, hungry orange kitty named Goose, and while his own secret identity was hardly unexpected – there's too much consistent focus on the cat for the animal to be merely pet decoration – Goose's presence was enjoyable enough for me to hope he pops up again sometime, preferably in a couple of scenes with Baby Groot. I do have to give Marvel Studios credit: After 21 releases, there still hasn't been one I've actively hated, and most of these box-office titans I've very much liked. Captain Marvel, though, isn't among them. The movie may be about a former fighter pilot, but it's more accurately about autopilot. 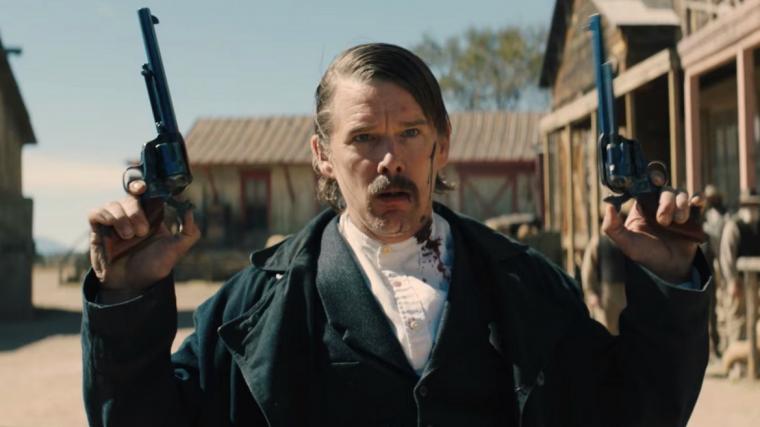 Pity the movie that's forced to open opposite a Marvel blockbuster. While you're at it, pity the patrons suckered into instead seeing director Vincent D'Onofrio's The Kid, an old-timey Western that's violent enough to be R-rated but bland enough to suggest an unworthy escapee from the History Channel's made-for-TV stable. Commercial breaks could only have benefited this dull, dutiful tale of young siblings (Jake Schur and Leila George) who escape their abusive uncle only to have run-ins first with a surprisingly friendly Billy the Kid (professional Leonardo DiCaprio impersonator Dane DeHaan), and then with a stoic Sheriff Pat Garrett (Ethan Hawke, the only recognizable human on the premises). In between bouts of Schur's apathetic voice-over narration, the film is chock-full of clichéd shoot-outs and saloon melees and endless debates about What It Means to Be a Man. The whole of this unmotivated enterprise, meanwhile, feels like nothing so much as the calling in of favors – from D'Onofrio's Full Metal Jacket castmate Adam Baldwin, and his Magnificent Seven castmate Hawke … and his other Magnificent Seven castmate Chris Pratt, whose pop-eyed, hambone portrayal of that odious uncle suggests that scurrilous bad guys probably won't ever be in the actor's wheelhouse. Who's no doubt wishing he were back in the Marvel universe now?