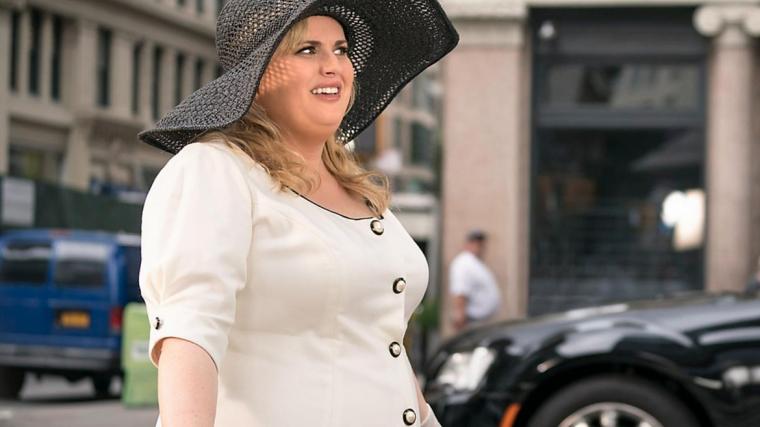 Rebel Wilson in Isn't It Romantic

Not two weeks ago, in What Men Want, Taraji P. Henson suffered a conk on the noggin and woke with the ability to hear men's secret thoughts. Now, in Isn't It Romantic, it's Rebel Wilson who's accidentally knocked unconscious, awakening to find her formerly grim world turned into a sunny, sprightly romantic comedy. As trends go, this one's a little disturbing: Just how much cranial damage must our female stars endure for the sake of high-concept popcorn entertainment? But my primary issue isn't that this new release is overly familiar – that's actually its entire point. It's that director Todd Strauss-Schulson's genial spoof is almost too good at its job, pinpointing genre clichés with such satiric precision that we can't help noticing how the movie exudes the exact same kind of vanilla-ice-cream blandness that it chides other rom-coms for propagating. Rebel Wilson, bless her, may be the anti-Katherine Heigl, but here, she's really just Katherine Heigl.

As Wilson's architect character Natalie initially recoils from, and eventually revels in, what she deems “the Matrix for lonely women,” Strauss-Schulson's film does make some shrewd observations and score some mild chuckles. Although the subplot goes unfortunately nowhere, I did enjoy its recognition of how workplace women in rom-coms never get along, with Natalie's lovably solicitous assistant (a terrific Betty Gilpin) transformed into a power-hungry harridan who detests Natalie for no reason beyond her gender. Having Natalie's pot-dealing neighbor (Brandon Scott Jones) turn into a shrieking-queen bestie with no life outside their friendship is a risky move that proves utterly inspired thanks to Jones' fearless flamboyance and Natalie's awareness of how politically incorrect the guy now is. (“You look like an alien who's faking being gay.”) And the script's trio of screenwriters also deliver spot-on decimations of hottie romantic obstacles (embodied here by Liam Hemsworth and Priyanka Chopra), navel-gazing voice-overs, kisses in the rain, thwarted church weddings, and mid-movie song-and-dance numbers, with Wilson leading a choreographed rendition of Whitney Houston's “I Wanna Dance with Somebody” less than a year after a similar sequence transpired in Love, Simon. (Let's hear it for genre disparagement regardless of sexual preference!) 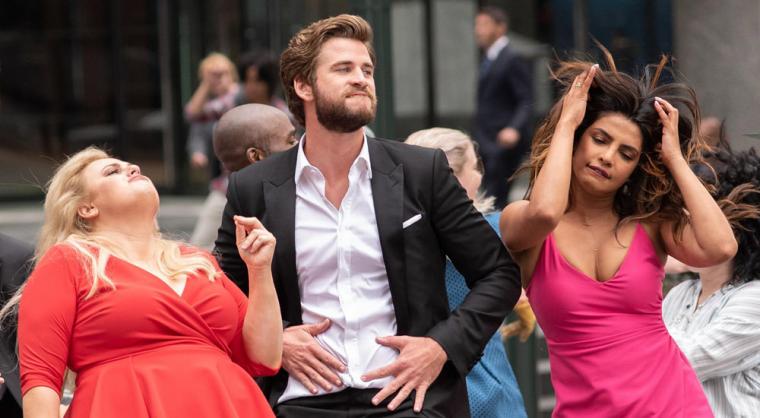 But there seems to be an almost built-in limitation to the film's success, because its parody of that drearily “spontaneous” rom-com karaoke performance still means having to sit through a drearily “spontaneous” rom-com karaoke performance. (It's like if you spoof a bad SNL skit, what you're left with is a bad SNL skit, the only difference being that it's also a self-aware one.) So even though Natalie may rail endlessly against the genre clichés she's forced to endure, that doesn't change the fact that they're genre clichés regardless, which makes Isn't It Romantic, at least for some of us, just as formulaic and unsurprising and ultimately boring as the movies it both pokes fun at and wants desperately to be. It's basically the Deadpool of rom-coms – a work that casually annihilates its inspirations only to ultimately embrace them. Only it's not as funny.

And while I would certainly understand Wilson's desire to move past her current comedy groove as an uncouth hellion (a goal made tougher by the casting of Adam Devine – Bumper to Wilson's Fat Amy in the Pitch Perfect movies – as Natalie's unnoticed romantic ideal), she's sadly not working to her strengths here. Wilson is still charismatic and lovely, and acts her role with ingratiating ease. But she isn't commanding or, really, all that interesting. The best that we probably could've hoped for from the movie was for Wilson, with her unrestrained comic talent, to explode the genre's conventions in some previously unimagined way – to offer a defiant middle finger to all the Heigls and Bullocks and Witherspoons, and also to the crowds who've flocked to their films. Instead, she's asked simply to join their ranks – to lament her broken heart and get teary-eyed on cue – and that feels like a true waste of Wilson's gifts. There's a pretty great running gag here in which Natalie, being trapped in a PG-13 rom-com, finds herself maddeningly unable to vocalize the “F” word. After a while, though, I couldn't tell if that frustration was coming from Natalie, or rather from Wilson herself. 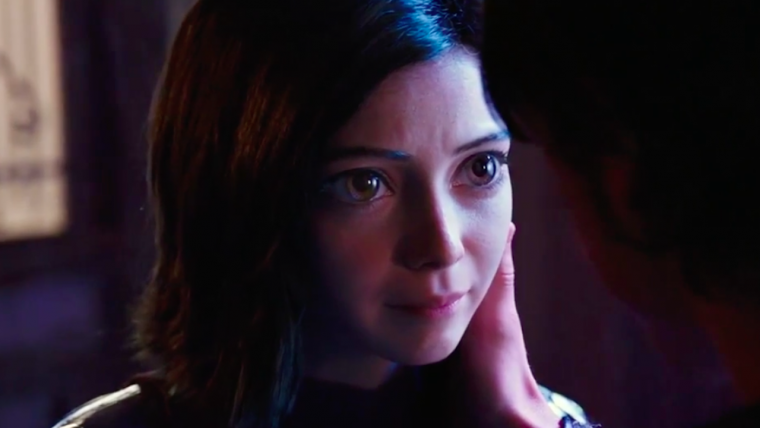 As he apparently needed a side project in between not making Avatar sequels (I kid 'cause I can), James Cameron serves as producer and co-writer for director Robert Rodriguez's Alita: Battle Angel, a sci-fi adventure about a humanized cyborg (a motion-captured Rosa Salazar) who learns to love, and remembers how to fight, in a post-apocalyptic world.

Over the weeks prior to it release, area cineplexes have really been shoving this one down our throats; I'd venture that a good seven out of eight movies I've attended since Christmas have featured an Alita preview in which Cameron, Rodriguez, and co-producer Jon Landau rave about their manga-inspired entertainment, with Rodriguez offering a plaintive “We need a movie like this right now.” Do we? Because like most people, I've already seen Avatar. And Spielberg's A.I. And also Blade Runner, WALL•E, District 9, The Hunger Games, Death Race 2000, Elysium, Final Fantasy: The Spirits Within, Speed Racer, and any number of other movies that this one liberally borrows from. (At one point, I even caught a whiff of that dreadful Star Wars prequel The Phantom Menace when Alita was racing about on her human boyfriend's trumped-up unicycle and shrieked “Whee-e-e-e-ee!” just like that tow-headed little Anakin Skywalker did.) All things considered, however, the results here are kind of fun, even if, as per usual with films that Cameron has either written or co-written, you have to simply sit back and enjoy the visuals and pretend you don't understand a word of English. 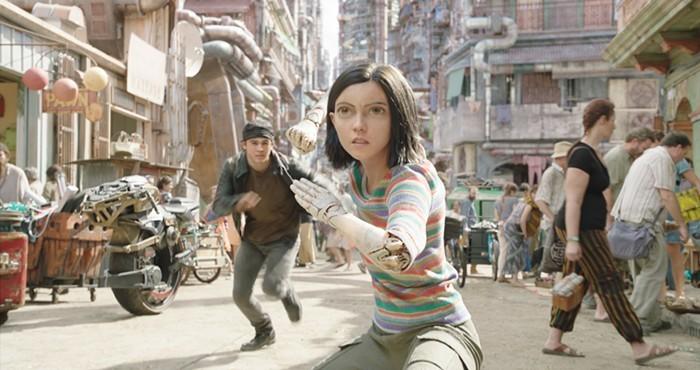 With a charisma-drained Christoph Waltz acting as Geppetto to Salazar's combat-ready amnesiac Pinocchio, the plot is all over the place, blending the evil machinations behind a vicious sporting event called Motorball with odious villains wanting to capture cyborgs for spare parts with Alita's yearning to uncover her true identity. Yet Rodriguez, who appears to be having a behind-the-scenes blast, makes the convoluted storyline go down easily through snappy pacing and his giving nearly every sequence the necessary amount of push: legitimate wonder in the early scenes with Alita, her eyes as big as an animated Disney princess', slowly adjusting to her newly mobile frame; action-comedy satisfaction when Alita initiates a wildly choreographed bar fight; visceral excitement during the Motorball challenges. (The game proves rather like Harry Potter's Quidditch, but the rules are easier to follow.) And despite no one on-screen giving a truly arresting performance, I did get a kick out of Mahershala Ali as the stock heavy in a long leather jacket, especially when, momentarily possessed by an evil autocrat (don't ask), he stared at a puncture wound to the heart and opined, “That looks fatal.”

That laugh-evincing line notwithstanding, though – ugh, is this thing hard to listen to. In case you're wondering where Alita got her post-colon moniker, a Motorball announcer handily tells us “She has the face of an angel and a body built for battle!” (Oh-h-h-h … Battle Angel! I get it now!) A hulking cyborg nemesis bellows to Alita, “Come here, little flea, so I can pinch your head off!” (This creature calls our heroine “little flea” with the frequency that we heard “Jack!” “Rose!” “Jack!” “Rose!” in the last hour of Cameron's Titanic.) Alita's hunky human beau Hugo (Keean Johnson) gets Alita up-to-speed on modern events by saying, “It's a harsh world … you've got to stay focused on your dream.” Aren't those the same words of inspiration uttered by every single contestant on American Idol? Alita: Battle Angel has a solid futuristic look and is diverting in a completely throwaway manner, and I left just engaged enough to not dread the sequels that the film's non-ending seems to promise/threaten. But I do wish the film had taken fewer cues from Avatar and more from The Artist. 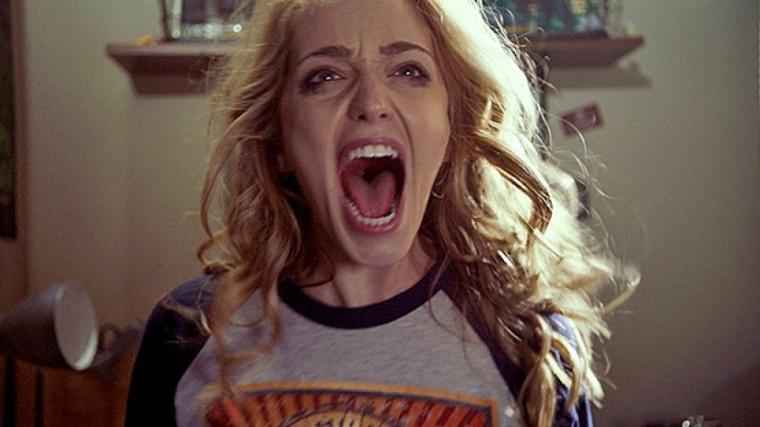 A horror comedy that's neither scary nor terribly funny, writer/director Christopher Landon's Happy Death Day 2U at least benefits from being clever and boasting another sharp, game performance from leading lady Jessica Rothe. A slasher-flick Groundhog Day, the 2017 Happy Death Day found Rothe's sardonic sorority sister Tree Gelbman forced to re-live the day of her murder over and over again until she finally solved the mystery of who killed her and was allowed to literally get on with her life. You might suspect that the sequel would consequently involve the girl re-living another day that ends in her demise. But in a witty narrative touch, a university science project gone wrong instead sends Tree back to that same traumatic day in 2017, albeit in a parallel universe in which her boyfriend Carter (Israel Broussard) is dating her rival Danielle (Rachel Matthews), her deceased mom (Missy Yager) is alive, and the knife-wielding psycho in the baby mask has a completely new identity.

This might sound like a hoot, and I was certainly primed for fun the moment Tree recognized her dilemma and, seething with comic rage, went on a WTF?!? tear through the quad, running into the same well-meaning idiots she ran into again and again in 2017. (The immensely likable Rothe is never more spirited than when Tree is profoundly pissed off, which, thankfully, she is a lot.) But while the movie boasts admirable invention, particularly for a fast follow-up, it kind of forgets to be frightening; I've rarely seen a horror film that treated its horror as this much of an afterthought. And barring the slapstick sequence in which Tree decides that suicide is preferable to murder – her swan dive into a wood chipper was a gory/funny delight – it also tends to eschew jokes in favor of bland sentiment, with our heroine exuding so much angst over her beau's absence and her mom's return that instead of blood and sweat we're given a plethora of tears. Happy Death Day 2U is an easy sit, enjoyably acted and impressively meta. Yet there's little here that lingers, and even at only 95 minutes, the storyline repetition begins to feel less deliberate than lazy. Here's hoping Landon, Rothe, and company can quickly move on before studio heads decide it's time for a Happy Death Day 3Peat.