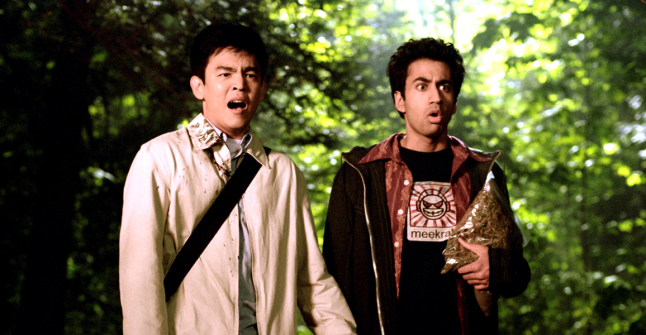 How strange that, of the two movies I recently caught as a double-feature - Jonathan Demme's The Manchurian Candidate and Harold & Kumar Go to White Castle, directed by Dude, Where's My Car? auteur Danny Leiner - not only is Harold & Kumar the better of the two, it's the only one really worth discussing in any detail.

The Manchurian Candidate, while deeply flawed and unnecessary, does have a professional sheen and a hell of a cast, but Harold & Kumar is something you almost never get to see: a truly intelligent stoner comedy. I doubt that Danny Leiner will ever earn (or deserve) the critical accolades that Demme has enjoyed in the past, yet he, his screenwriters, and his cast have fashioned a gross-out comedy that's such a mass of contradictions - a movie that's crude yet benevolent, that explodes stereotypes while embracing them - that it feels like a new genre is being created right before your eyes. I'm not prepared to compare Danny Leiner with D.W. Griffith or anything; still, given the choice among Demme's political thriller and this goofball farce involving the search for the perfect munchies, I'd go with Leiner's work every time. (I'm also guessing that, 10 years down the road, Harold & Kumar will be the one remembered with the most affection.)

The plot couldn't be simpler: Harold (John Cho), a Korean-American investment banker, and his roommate Kumar (Kal Penn), an Indian American desperately avoiding medical school, get high one night and spend the evening - the entire evening - searching for a local White Castle, only to have their quest continually thwarted by bizarre strangers and incredibly bad luck; the film is After Hours with cotton-mouth. You could make a pretty strong case for Harold & Kumar being utter crap: Leiner's movie has the flat, predictable staging and ugly cinematography of a third-rate sitcom, and the material itself isn't exactly Chekhovian in its moral complexity. Plus, you'll have to deal with several scenes that have no point other than eliciting Ewwwws from the audience; an encounter with a boil-covered hick played by Christopher Meloni aims for it's-so-icky-it's-funny yet never progresses beyond it's-so-icky.

Within its genre, though, Harold & Kumar is practically revolutionary. I can't recall another stoner comedy that's so nonjudgmental; even a seemingly pro-pot flick such as Half-Baked, despite featuring occasional laughs, winds up catering to the mainstream in its depiction of dope smokers as lazy, buffoonish nitwits prone to committing criminal acts to score more weed. (In nearly 70 years, Hollywood hasn't progressed far past Reefer Madness.) Harold and Kumar, though, aren't treated as aimless potheads. They're bright, articulate characters for whom getting high and vegging out in front of the TV are merely the most enjoyable parts of their humdrum, routinized lives; the film isn't an apologia for pot-smoking, but it's astute enough to suggest that given more fulfilling circumstances - Harold finding love with an attractive neighbor, for instance, or Kumar finding pleasure in a career - our heroic duo wouldn't be on this all-night search for the perfect burgers. For Harold and Kumar, getting high together is the only part of their day that's actually fun, and because of this, their White Castle search becomes almost touching - they could be telling the world, "This is the one thing we have. You're not taking this away from us." (Needless to say, seeing the movie with the Right Audience will aid your enjoyment immensely, and the stoner-comedy genre has a built-in litmus test: If your crowd audibly gurgles at the film's first shot of All That Weed - like Homer ogling a doughnut - you're in good company.)

Given such a refreshing (for Hollywood, at least) viewpoint, the movie's refusal to mire itself in racial stereotypes - its matter-of-fact acceptance of people as people - almost comes off as an afterthought, which is as it should be. People of all ethnicities are poked fun at in Harold & Kumar, but the only characters the movie holds in contempt are those with no tolerance for persons of color (i.e., the movie's team of thuggish, extreme-sports-loving jackasses). Yes, Harold is a brainy, girl-shy nerd and Kumar is apparently genetically predisposed with a talent for medicine, but screenwriters Jon Hurwitz and Hayden Schlossberg never suggest that the clichés make the person. Harold and Kumar have variety and depth; they're by no means one-joke creations, so their experiences carry more comedic weight than most gross-out comedies allow. Scene for scene, the movie's braininess catches you off guard.

Oh, and did I mention that the movie is freakin' hysterical? A fantasy scene in which Kumar imagines himself married to an enormous bag of pot might be the most entertainingly Dadaist sequence the movie year has offered us, cameos by the likes of Anthony Anderson and Neil Patrick Harris are funnier than those appearances usually are, and the inspired partnership between Cho and Penn provides knowing laughs even when nothing particularly hilarious is happening; it feels like Harold and Kumar have carried on this loving, bickering friendship since childhood. No one will ever mistake Harold & Kumar Go to White Castle for a masterpiece, but it's far more fun than most of what's out there, and, amazingly, a good deal smarter, too. As for The Manchurian Candidate, Jonathan Demme has made a gloomy, dull work out of something lean and exhilarating, namely, John Frankenheimer's 1962 satirical masterpiece; it doesn't feel like Demme and his screenwriters are re-interpreting that classic so much as they're just not getting it. Didn't they perceive the comedy at all? Or, more likely, did they just assume that, in our post-Watergate era, political machinations within the government are no laughing matter? (The movie, like all of Demme's post-Silence of the Lambs projects, has more than a whiff of virtue about it.) God knows Demme is trying desperately to make a topical thriller, but the attempts to update a nastily brilliant Cold War analogy to the Gulf War era have little bite and even less meaning, and the correlations between our current political climate and the murderous one of Manchurian are tinny and obvious; the movie is trying so hard to appear cerebral that it comes off as a little foolish. None of the performers falters. Denzel Washington and Liev Schreiber project mental anguish and possible insanity with minimal fuss, Meryl Streep provides achingly necessary comic relief, Kimberly Elise is effective in a drastic re-writing of the Janet Leigh role, and Jeffrey Wright, in his one big scene, is haunting. Yet you don't thrill to the performances; you admire them the way you admire cinematographer Tak Fujimoto's color palette or the editing rhythms of the film's interrogation sequences - as examples of solid professionalism in an over-scaled, wrong-headed production. Despite its technical skill, The Manchurian Candidate is a drag, heavy-handed when it actually required the lightest of touches.