Walking into Solo: A Star Wars Story, my biggest fear wasn't that it would be bad. It was that it would be terribly disjointed – a sci-fi adventure in which it was painfully obvious which moments were the work of original directors Phil Lord and Christopher Miller (the Lego Movie and 21 and 22 Jump Street tyros who were fired well into production) and which were the work of replacement director Ron Howard. Their output, after all, couldn't be more dissimilar: Lord/Miller releases are loose, rambunctious, self-mocking, and sometimes bat-shit crazy; Howard's undertakings, even his comedies and thrillers, are sane, sturdy, earnest, and unsurprising to a fault.

So I guess I should feel grateful that this origin-tale prequel for Han Solo (now played by Alden Ehrenreich) doesn't seem like two movies awkwardly mashed into one. As the end credits rolled, however, I certainly didn't feel satisfied, considering that Solo instead plays like both a strangely safe and timid Lord/Miller movie, which isn't a compliment, and like a traditional Howard endeavor with slightly more invention, which isn't really a compliment, either. Someday, perhaps, a great oral-history tell-all on the making of this troubled blockbuster will be published and we'll finally know exactly what went wrong and why. (For what must be myriad reasons, the film's participants have remained tight-lipped about the original shoot, as well as precisely what of Lord/Miller's vision remains in the final cut.) Until then, though, we only have conjecture and Solo itself to keep us entertained, and I'm not sure the latter provides quite as much diversion as the former.

I was no fan of 2016's dour, personality-free Star Wars offshoot Rogue One, but at least it was self-contained and boasted figures whose fates weren't obvious the moment they stepped on-screen, and there was legitimate pathos – plus considerable ballsiness – in its apocalyptic climax. Whatever you thought of the movie's storyline, something was definitely at stake. By contrast, there's nothing at stake in Solo, because even viewers only moderately well-versed in Star Wars mythology know the score from the start: Han and Chewbacca (Joonas Suotamo) are gonna meet, become friends, and eventually become flight partners, Lando Calrissian (Donald Glover) is gonna be a charming turncoat, Han is gonna win Lando's Millennium Falcon in a card game … . We also know that Han is destined to be the romantic match for Princess Leia. So even though he spends nearly his entire film's running length pining for longtime love Qi'ra (Emilia Clarke), we know better than to become invested in this relationship, given that the young woman is going to be inconsequential by the time, chronologically, we're introduced to Han Solo in George Lucas' 1977 franchise starter.

Some fans doubtless won't care. They're not at Solo to see what happens, but rather how it happens: how Han and Chewie met, how Han won that ship, how Han got his last name. (In truth, I can't fathom anyone giving a damn about that last bit, but we're shown nonetheless.) And it's not as though the movie, with its script by Jonathan and Lawrence Kasdan, doesn't provide anything new: Han entering a smuggling operation alongside Woody Harrelson, Thandie Newton, and a four-armed creature – an Ardennian, apparently – with the voice of Jon Favreau; malevolence courtesy of a suave intergalactic crime lord (Paul Bettany) and a behemoth centipede that stands on its hind legs and speaks in the strangled shriek of Linda Hunt; unanticipated discomfort comedy with Lando's endlessly aggrieved droid L3-37 (voiced by Phoebe Waller-Bridge), who reveals to Qi'ra her/its profound crush on her/its boss. (“How would that work?” asks Qi'ra in what must be the series' most overt reference to sex. “Oh,” says the droid, “it works.”) 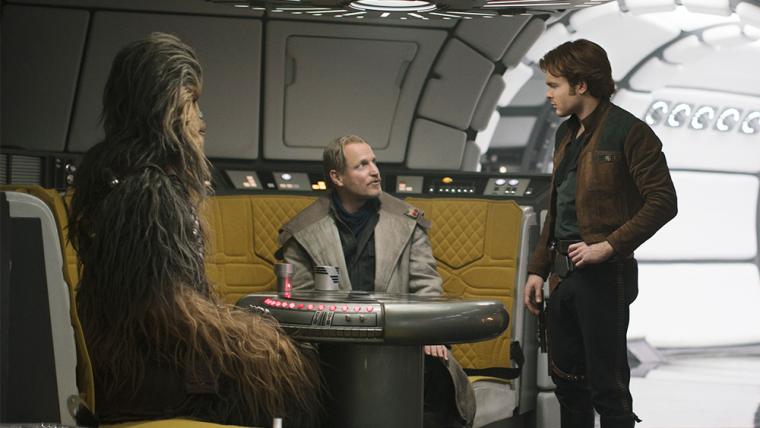 Yet Solo remains a curiously low-energy outing, as though everyone involved, with the possible exceptions of Glover and Waller-Bridge, were afraid that too many displays of irreverence, imagination, and exhilaration would result in what happened to Lord and Miller happening to them. While none of the action sequences is flat-out boring, these scenes are also steadfastly unmemorable – even the legendary Kessel Run that Han makes in 12 parsecs is too routinely staged and badly lit to be much fun. (All throughout, Bradford Young's cinematography is uncharacteristically murky, even in our first images of Han, Chewie, and the Millennium Falcon.)

Meanwhile, beyond the marvelously laid-back Glover, who's as smooth as Billy Dee Williams hawking Colt 45, the on-screen performers go through their motions dutifully but with little apparent enthusiasm or joy. Though he's got the Harrison Ford grin down pat, the supremely talented Ehrenreich doesn't give his role either enough Ford or personal distinction to emerge as more than a pawn to be repositioned on Solo's narrative chess board. Despite her natural appeal, Clarke appears stymied by a backstory that's far more evocative, and uglier, than the Star Wars brain trust probably wants us reflecting on. As for Harrelson, he plays his weapon-twirling cowpoke-in-space as admirably as you'd expect, but also seems a bit tired. After Three Billboards, LBJ, The Glass Castle, War for the Planet of the Apes, and this, all within a 10-month span, I'm getting a bit tired of him.

Every so often, we're given a glimpse of the fleet, devil-may-care charmer this might have been – a work deserving of both its title character's reputation and Harrison Ford's legacy – in its details, be they the eight-eyed, cheating Sabacc player, or Lando's riotous escape from a dicey situation, or the definitive rejoinder to the question of whether Han had it in him to shoot Greedo first. And if it didn't have the Star Wars brand attached, we may have viewed Howard's film as a perfectly pleasant sci-fi time-waster – a less-tacky John Carter without the crappy rep. Yet its enjoyable particulars aside, the big, bland picture of Solo: A Star Wars Story suggests that the movie probably wouldn't have worked with Lord/Miller at the helm, either … though I'm reasonably sure that those guys, at least, wouldn't have made us endure yet another cameo by Clint Howard.