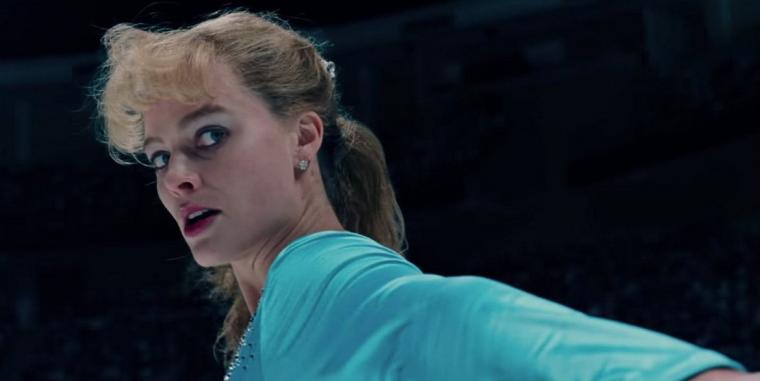 Margot Robbie in I, Tonya

Even though the Tonya Harding bio-pic I, Tonya is being billed (misleadingly, I think) as a comedy, the movie isn't a joke. It's more like the deconstruction of a joke. To be sure, there were absurd elements attached to what those on-screen keep referring to as The Incident – that being the 1994 assault on figure skater Nancy Kerrigan that turned Olympic rival Harding, seemingly overnight, into a public pariah and media punchline. But the achievement of director Craig Gillespie's offering, and it's no insignificant one, lies in how it forces us to confront precisely what it was we were laughing at, or thought we were laughing at, when we laughed at Harding. Painful, wrenching, and, in my view, deeply empathetic toward its subject, this is one of the least funny “comedies” I've ever seen. I mean that as a compliment.

In terms of narrative, Gillespie's movie, with its script by Steven Rogers, is wildly ambitious. Dovetailing its account of Harding's hardscrabble life from ages three through 23 with re-enacted interviews conducted decades later, I, Tonya presents us with a traditional bio-pic trajectory that's frequently interrupted by characters commenting on past actions – explaining them or, just as likely, contradicting them. (The fourth wall is routinely broken à la The Big Short, with scene participants suddenly turning to the camera to inform us “It happened just like this” or “It didn't happen this way at all.”) As she tells her side of the story, The Incident and otherwise, Harding (played as a child by Gifted's Mckenna Grace and from ages 15 on by Margot Robbie) is clearly an unreliable narrator. But she's hardly alone, as we're given a whole host of competing voices whose recollections may not be entirely trustworthy, among them Harding's abusive ex-husband Jeff Gillooly (Sebastian Stan in a series of unfortunate mustaches), detached coach Diane Rawlinson (Julianne Nicholson), oily Hard Copy reporter Martin Maddox (Bobby Cannavale), and Harding's cruel and manipulative mother LaVona (Allison Janney). Their dueling perspectives do produce occasional diversion, but they're still not the least bit funny. In the end, what does it matter if Gillooly argues that he didn't hit Harding on that particular day? Why the hell was he hitting her on any day?

And that's a question Gillespie seems to demand we ask, because from the start, he never tries to hide the fact that this movie, this whole story, is rooted in Harding's pain, which provides the film with an emotional ambition to match its cinematic ones. (Not for nothing, I'm presuming, does Gillespie choose to show us the famous clip of Kerrigan immediately after her attack – “Why?! Why?!?” – in his movie's first 15 minutes.) It's easy to sneer and chuckle at gasbag bodyguard and Kerrigan-assault “mastermind” Shawn Eckardt (Paul Walter Hauser) when he's nattering on about his nonexistent counter-terrorism skills. But despite her uncouthness and tacky outfits and questionable way with the English language, you can't laugh at Harding – not after you've watched her mother beat little Tonya with a brush and force her to pee herself at the skating rink, and not after you've witnessed the young girl's heartbreak as her beloved father drives out of her life. The truth about The Incident may be forever unattainable. Yet the deeper truth of Harding's never-ending and oftentimes misguided quest for love – from LaVona, from Gilloolly, from us – is apparent from the beginning, and invests every crazy, disturbing, triumphant, and heartbreaking (lowercase) incident we experience on-screen. When Harding beams with unbridled joy after becoming the first American woman to successfully perform a triple axel, her eyes are brimming with tears. Yours likely will be, too, because Gillespie and Rogers – and Robbie, in her thunderously committed performance – have shown us that the crowd's ovation is the closest thing to true love that Harding might ever get. 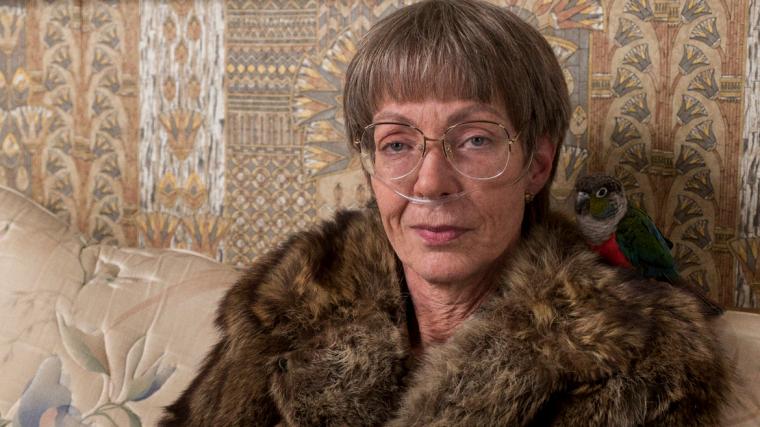 This all makes I, Tonya sound like a knee-slapping riot, doesn't it? But even though this purported comedy is actually achingly sad, the film isn't hard to sit through. Rogers' script, with its subtly incisive dialogue, is incredibly smart and editor Tatiana S. Riegel's cutting has purpose and flair, especially in the skating sequences that required digital trickery to superimpose Robbie's face onto the body of a clearly world-class skater. (Robbie performs much of her own skating, but would likely be the first to tell you she couldn't pull off a triple axel of her own.) Loathsome though her character is, Janney's monstrousness as LaVona is fearless and utterly hyopnotic; you'll detest the woman, but you might in some small way understand her motives, which Janney explores with nearly surgical precision. (At the Iowa City screening I attended, my crowd understandably gasped when LaVona punctured Harding with a knife, but it was actually Janney's reaction to this unforgivable act that raised my flesh – not an apology, but a stricken silence suggesting “Wow … I may have gone too far this time.”)

But this is Margot Robbie's show first and foremost, and Gillespie gives his star the breathing room necessary to deliver a series of profoundly affecting moments: begging for a momentary reprieve from the press outside her door (“Could you please just leave me alone? For now?”); silently covering up her latest facial bruise with foundation while trying to remember how to smile; indicting the audience for our complicity in making her a global embarrassment. I, Tonya is in many ways remarkable and I urge you to see it – just so long as you don't see it expecting a load of laughs. In one post-Incident scene, we hear David Letterman, on his old CBS show, reciting one of his nightly “Top 10” lists with Harding as the punchline to every gag while the woman herself sits lost and forlorn in her kitchen. Never before or since has Letterman seemed less amusing. 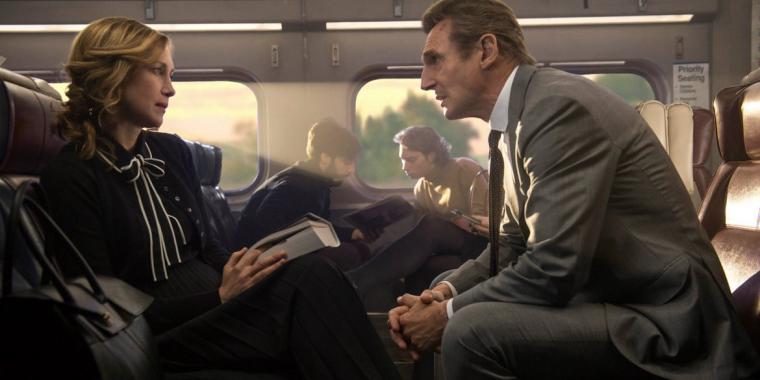 Director Jaume Collet-Serra's The Commuter opens with a rather elegant montage showing the passing of time as Liam Neeson's insurance agent Michael MacCauley travels to and from his dull city job day after day and year after year, traveling on the same train and sharing the same friendly nods and small talk with the same fellow passengers. Quite frankly, their geniality dumbfounded me. Didn't these people see Neeson in Collet-Serra's Non-Stop? Don't they know that putting this guy on public transportation is a recipe for disaster?!

The Commuter, meanwhile, is its own kind of disaster. Not long after that prelude – the best sequence in the movie, sadly – Vera Farmiga pops in to subtly flirt with Neeson and make him an offer of $100,000 in exchange for his identifying a passenger who doesn't belong there carrying a package he or she shouldn't have. The vagueness is eventually sorted out. The idiocy, however, only continues to escalate as Neeson's middle-aged family man (a former cop, natch) starts doing everything Neeson always does in his action thrillers: kicking the crap out of people, getting the crap kicked out of him in return, and shouting into a cell phone “If you touch my wife and son, so help me God … !!!” Basically, this ludicrously convoluted and unconvincing affair is just Non-Stop redux with a far less witty script, terrible CGI, and a badly wasted supporting cast (the injured parties here include Jonathan Banks, Elizabeth McGovern, and Sam Neill), and its 105 minutes feel endless as we wait, and wait, for Neeson to come to the realization we all came to the second Patrick Wilson showed up. (There are few absolute givens in movies, but if blond, blue-eyed, square-jawed Wilson is playing the hero's trusted best friend, you can rest assured that this friend is not to be trusted.) I will admit, though, that Neeson's age is starting to add a poignant quality to his works, because it's becoming increasingly difficult to watch the 65-year-old performer sprinting through train compartments and leaping between train cars without worrying that the poor man is going to break a hip or worse. Not that his co-travelers in The Commuter seem much concerned, considering they don't even think to ask “What's wrong?” whenever a profusely sweating Neeson addresses them newly bruised and bloody. Maybe the problem here isn't that they haven't seen Non-Stop. Maybe it's that they can't see. 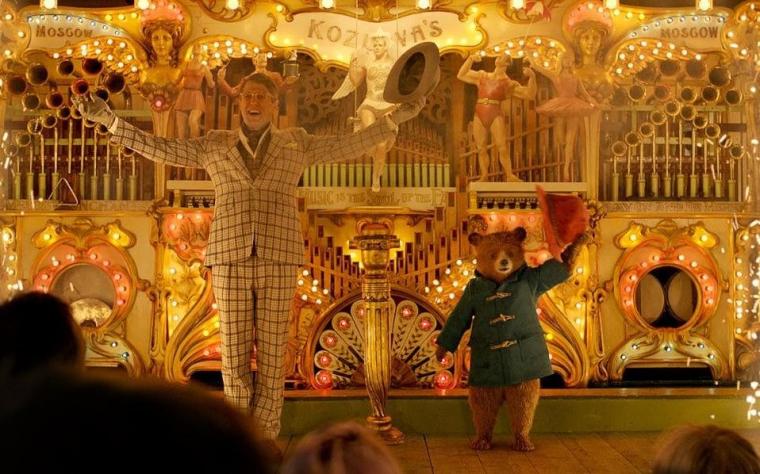 Just like The Commuter, the family comedy Paddington 2 climaxes with all manner of derring-do aboard a speeding locomotive, and I can only imagine how much more enjoyable the former would've been had Liam Neeson's role instead been played by an ambulatory teddy bear in a floppy red hat. Lacking only the original film's sense of discovery and retaining every last ounce of its charm, director Paul King's sequel finds the lovable children's-book character now living contentedly in London with the Brown family, his happiness soon compromised by a dastardly villain, a false arrest, and a lengthy prison sentence. But don't expect Oz – unless, that is, it's prefaced with “The Wizard of,” because darned near everything about this sprightly, inventive, bighearted follow-up is magical.

Between Ben Whishaw's devastatingly sweet vocals as Paddington and King's enviable gift for slapstick silliness, the movie would likely have been a hoot even if it was just 90 minutes of our friendly bear performing neighborhood chores; when Paddington cheerily announces “I'm going to be a window-cleaner!” here, your mind reels at the unlimited comedic possibilities. But I wouldn't have traded the plot we do get for anything, considering that Paddington's prison, under his influence, is quickly transformed into the happiest place on Earth (complete with fondue fountain in the mess hall), and the thief whose actions sent him there is an egomaniacal actor whose apartment overflowing with Hugh Grant head-shots would be creepy if the role weren't being played by Hugh Grant. I loved so much about Paddington 2: the winning comic turns by Sally Hawkins, Hugh Bonneville, Julie Walters, and loads of other British greats; the sublime tour of London from inside a pop-up book; the newspaper headline that read “Get-Out-of-Jail-Free Card Not Legally Binding.” But whenever Grant is on-screen, whether disguised as a nun or stealing a scene with a perfectly delivered “Cravat!”, the film abandons the world of first-rate family entertainment for the realm of the deliriously insane. Don't even think about exiting the auditorium before the end credits, when the guy gets his long-delayed chance to sing and tap dance his way into our hearts. For someone who starred in Sense & Sensibility, Hugh Grant, bless him, shows no hesitancy about ridding himself of both.

For reviews of The Post and Proud Mary, visit “Bold News Is Good News.”