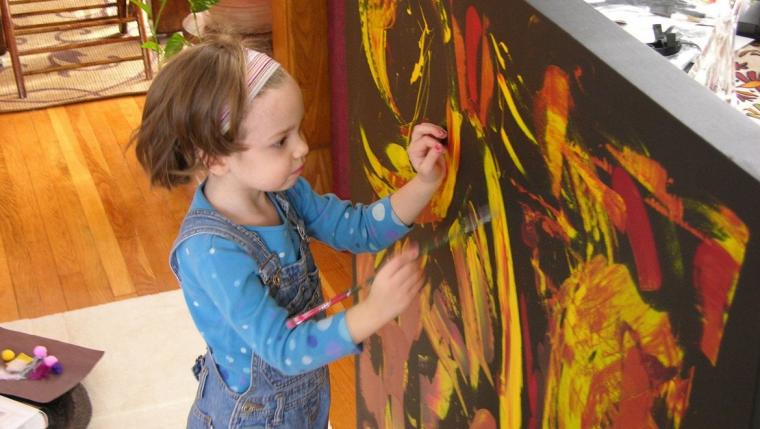 "My Kid Could Paint That" screened in the Figge Art Museum Member Movie Marathon -- December 4.

A trio of acclaimed, art-themed films will be screened free to members of the Figge Art Museum on December 4, with the Davenport venue hosting John Deere Auditorium screenings of 2007's My Kid Could Paint That, 2006's The Rape of Europa, and 2013's The Show That Shook the World.

Directed by Amir Bar-Lev, My Kid Count Paint That follows the early artistic career of Marla Olmstead, a four-year-old from Binghamton, New York, who gains fame first as a child prodigy painter of abstract art, and then becomes the subject of controversy concerning whether she truly completed the paintings herself or did so with her parents' assistance and/or direction. I.E. Weekly's Amy Nicholson called the film “a fascinating exploration of art, creativity, and family dynamics that takes an unexpected right hook,” while the San Francisco Examiner's Rossiter Drake described My Kid Could Paint That as “a sobering illustration of the way children can be exploited by adults who should know better – journalists, filmmakers, and especially their own parents.”

Adapted from the 1994 book by Lynn H. Nicholas and narrated by Oscar nominee Joan Allen, directors Richard Berge's, Nicole Newnham's, and Bonni Cohen's documentary The Rape of Europa explores the Nazi plunder of looted art treasures from occupied countries and the consequences of those actions. As does the book, the film covers a range of associated activities: Nazi appropriation and storage, patriotic concealment and smuggling during World War II; discoveries by the Allies; and the extraordinary tasks of preserving, tracking, and returning the art by the American Monuments officers and their colleagues. NewsBlaze's Kam Williams deemed the documentary “a fascinating history lesson about a generally overshadowed aspect of the Second World War,” with the Seattle Times' Moira McDonald raving that The Rape of Europa is “at its most moving when focusing on the small stories of individual artworks taken from their owners and restore to the families decades later.”

Wrapping up the Figge's Member Movie Marathon, director Garry Gates' hour-long The Show That Shook the World is the first film to record the history of one of the most important cultural events of the 20th century: the 1913 International Exhibition of Modern Art. Known as “The Armory Show,” and prompting a storm of controversy, the exhibition introduced such formerly “unknown” artists as Picasso, Matisse, and Gauguin, though the work most vilified by an outraged public was Marcel Duchamp's Nude Descending a Staircase. Featuring a previously unknown illustrated talk by Duchamp (recorded by producer Richard Miller), The Show That Shook the World presents the dramatic history behind the infamous exhibit, including rare archival photographs of the event.

The December 4 Member Movie Marathon will commence at 10:30 a.m. with a screening of My Kid Could Paint That, will be followed by The Rape of Europa at 1 p.m., and will conclude with The Show That Shook the World at 3:15 p.m. Groups will be assigned seats in the museum's John Deere Auditorium to allow for proper social-distancing, admission is free to Figge members, and more information and registration is available by calling (563)326-7804 or visiting FiggeArtMuseum.org.