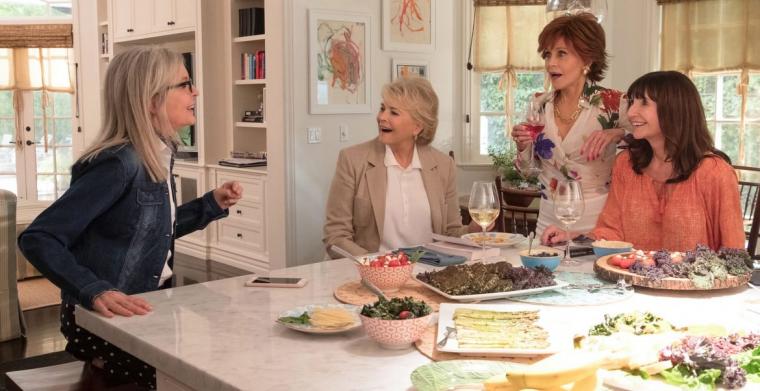 The aging-friends comedy Book Club stars Jane Fonda, Diane Keaton, Candice Bergen, and Mary Steenburgen as … . I'm sorry, but does it even matter? There are precisely zero circumstances under which I, or really any longtime movie fan, wouldn't want to watch this phenomenal acting quartet together on-screen, even if their material were as insipid as Book Club's keeps threatening to be.

Director Bill Holderman's feature-film debut, set in an always-sunny southern California, concerns the profound impact of Fifty Shades of Grey and its themes on four 60-something friends of 40-years-plus: Fonda's hotel magnate Vivian, a love-'em-and-leave-'em type forever wary of commitment; Keaton's recently widowed Diane, trying to stave off a relocation to Arizona with her overly concerned daughters; Bergen's federal judge Sharon, who insists that she has no time for or interest in dating; and Steenburgen's married restaurateur Carol, whose recent sex life is equated to the coupling of rabbits “if rabbits took a ton of Benadryl and made a chastity pact.”

That's one of the funnier lines in this script by Holderman and Erin Simms, who also come through with a sly reference to the Werner Herzog oeuvre, a decent excuse for Wallace Shawn to reprise his “little homunculus” figure from Manhattan, and an F-bomb punchline for Bergen that properly detonates. Theirs, however, is still the most predictable, contrived, and sitcom-obvious of narratives, the sort of thing that only Nancy Meyers occasionally gets away with now that Nora Ephron and Garry Marshall have passed. Holderman, meanwhile, still seems a long way from being able to pull off the necessary slapstick mortification in scenes of Keaton dog-paddling in a swimming pool and Bergen contending with aggressively vocal Web-site pop-ups. And while the dialogue is laden with double entendre in the style of Sex & the City, I couldn't have been the only one to wince when a veterinarian looked Bergen directly in the eye and made reference to her “lethargic pussy.” Scene after scene finds our heroines quaffing copious amounts of white, red, and rosé wine, which I sometimes felt I needed just to get from one embarrassing moment to the next. 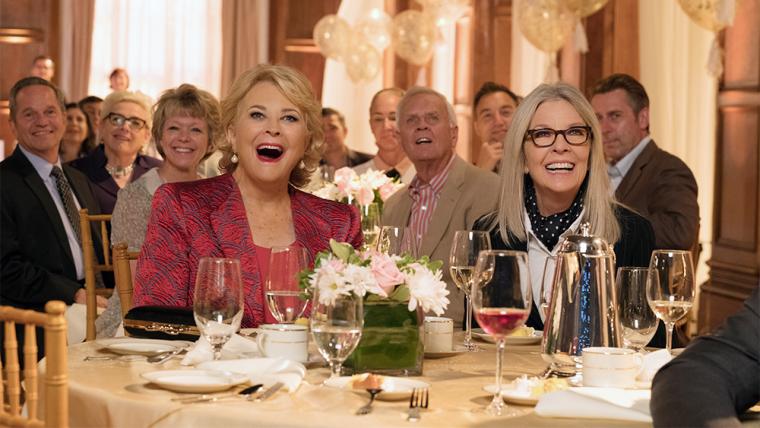 But given Book Club's cast, none of it matters – or rather, it does matter, just not nearly enough to keep you from having an overall sensational time. Fonda, who hasn't had a big-screen opportunity to employ her gifts for bitchy-neurotic verbal comedy since 1978's California Suite, demonstrates her superb timing and skill for underplayed emotion, and while I didn't care much about her character's romance with Don Johnson as The One Who Got Away, they do parry with panache. Keaton, better here than she's been since 2003's Something's Gotta Give, shakes off most of the mannered, cartoon-like behaviors that have sullied her recent performances and develops a marvelously funny, playful rapport with co-star Andy Garcia; barring that unfortunate bit in the pool, theirs are the finest, loosest scenes in the film.

Bergen, whose throaty voice and drier-than-sandpaper readings are things of comic beauty, seems to effortlessly fashion a specifically touching and sardonic figure whose personal fulfillment, above all the others', you actively root for. (This is never more true than in Bergen's blind date with Richard Dreyfuss, whose appearance elicited one of those endearing “Oh-h-h … it's him!” murmurs from patrons at my screening.) And Steenburgen, who strangely never achieved the leading-lady status her talents, charm, beauty, comedy chops, and Oscar win warranted, is a consistent delight and perfect partner to screen husband Craig T. Nelson, never better – or looking more incandescently happy – than when performing a solo tap routine to Meat Loaf. (The lucky few among us who fondly remember Melvin & Howard aren't wrong to well up at the sight of Steenburgen tapping again.)

In their individual subplots, even when you're bemoaning the formulaic paces that Holderman and Simms are putting them through, these four Hollywood icons are fantastic. When they're together, they're utterly magical – so much so that you barely notice how few scenes together they actually share. (If I'm remembering correctly, there are only four, plus one gathering for a group photo – one that should be immediately placed atop Grauman's Chinese Theatre – not long into the end credits.) Laughing and reminiscing and offering endless support, the women's naturalistic conversations and stunning rapport are about the most soothing, pleasurable breaths of fresh air I've experienced in 2018 movies thus far, aided by the script offering just enough hints of real-world experience and wisdom for the stars to evince honest feeling without appearing to slum. And despite the 15-year gap in actual ages from youngest to most senior, all of these radiantly gorgeous performers are completely believable as lifelong besties in their late 60s. (Who's laughing at all those Jane Fonda workout tapes now?!) Book Club could be seen as an excellent plug for the Fifty Shades series. I prefer to think of it, fingers crossed, as an excellent pitch for sequels. 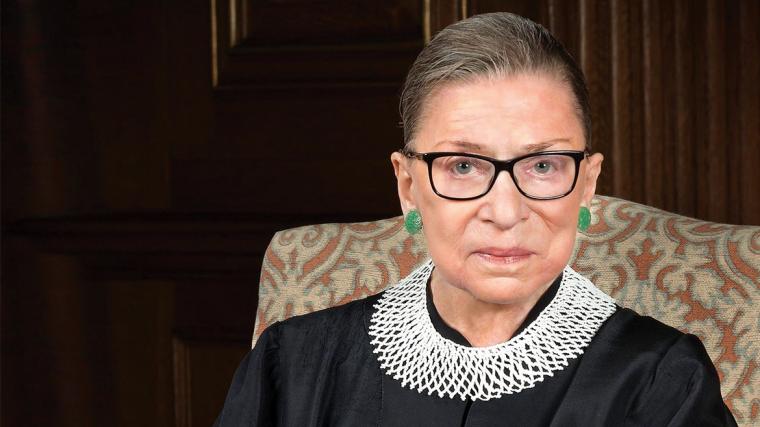 Candice Bergen's cat in Book Club – the one given the “lethargic” label by her vet – is named “Ginsburg,” as befits the pet of a federal judge. Based on RBG (now playing at Iowa City's FilmScene), it's the absolute last adjective you'd use to describe the actual Ruth Bader Ginsberg, the focus, star, and unmitigated object of worship in directors Julie Cohen's and Betsy West's documentary. Filled with new interview footage of the 85-year old Associate Justice of the Supreme Court along with all manner of archival film clips, photographs, and on-screen declarations by the likes of Bill Clinton, Orrin Hatch, and Gloria Steinem – the latter of whom calls Ginsburg “a superhero” – the movie is a traditional, mostly chronological talking-heads doc, albeit one with more memes of its subject's head plastered on Wonder Woman's frame that the genre usually permits. It's also understandably, yet kind of annoyingly, almost wholly free of dissenting opinion, which is weird considering that Ginsburg herself is practically the poster gal for dissenting opinion.

I consider myself firmly on Team Ruth. Yet I have to believe that even the justice herself would blanch at the unwavering praise and adulation she receives in Cohen's and West's movie, which surely wouldn't have wilted, and would have likely flourished, had the filmmakers treated their idol's career with a higher degree of scrutiny. We're told, more than once, of Ginsburg winning five of the six cases she tried before the Supreme Court prior to joining the bench – why no details on what happened with that sixth case? As a Kate McKinnon sketch on Saturday Night Live reminds us, Ginsburg has frequently been in the 5-4 minority on Supreme Court decisions – why don't we hear talking points from any of those five justices in the majority? (On two occasions in RBG, we see Ginsburg, apparently for the first time, watching McKinnon's SNL impressions of her, which I'm reasonably sure were kept in the final cut solely for the pleasure of hearing the woman's infectious giggle.) Even the complaints by Hatch and the now-deceased Antonin Scalia are measured at worse, and while I never had less than a good time at the film, I never felt we were getting the whole story, either – RBG is like the cinematic adaptation of a thorough term paper with all the uncomfortable bits conveniently whited out.

That said, I did learn a lot, and the elder Gibsburg is consistently marvelous screen company, and Lord knows that for a significant portion of female (and male) viewers, 90-plus minutes in the presence of such a wondrously complicated, humane, and humble public servant is going to be time extraordinarily well-spent. (Not for nothing, I'm guessing, has the movie cracked the box-office Top 10 two weeks in a row despite not playing on more than 375 screens.) I adored the footage concerning Ginsburg's trial history – with numerous passages of her arguments recited, in the present day, both from memory and verbatim – and her relationship with her beloved husband Marty, and was riveted by the details of her history: Ginsburg's Harvard Law School tenure as one of nine female students among nearly 500 males; her years spent nursing Marty through cancer treatment while attending law school and raising an infant daughter; her workout regimen with her professional trainer of 19 years; her closet full of specialty collars she wears depending on the mood of the case or her eventual verdict. And I wouldn't, for all the world, have wanted to miss the snippets of Gibsburg at the Kennedy Center appearing on-stage in the Donizetti opera The Daughter of the Regiment. (Can someone please find a way to get her to play Lady Bracknell in The Importance of Being Earnest?!) This fulsome, sublimely bighearted love letter opens with voice-over commentary from numerous right-leaning pundits – among them our president – decrying Ginsburg as “a witch,” “a zombie,” and “very wicked.” By the film's end, those monikers sound even more repellent and wrong-headed than they did before. And while RBG may not be perfect, it's kind of perfect, in our present cultural environment, for what it needs to be.

For reviews of Deadpool 2 and Show Dogs, visit “Reynolds Rap.”