Empathy for the Devil: “Operation Finale,” “Searching,” and “Kin” 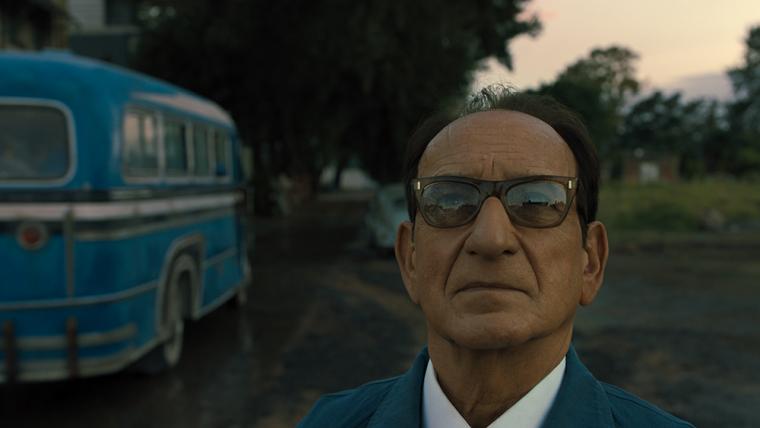 It's almost inconceivable, and a little perverse, that the same actor who was so convincing as a Jewish bookkeeper in Schindler's List, the heroine's father in Anne Frank, and freakin' Moses could also be wholly persuasive as Adolf Eichmann, the chief architect behind Hitler's Final Solution. But considering his additional screen roles have ranged from Mahatma Gandhi to gangster Meyer Lansky to film pioneer Georges Méliès, Ben Kingsley has always demonstrated a virtuosic talent for playing ethnically diverse real-life figures – a skill that's both the chief pleasure and biggest moral hazard in the engaging, slightly infuriating post-war thriller Operation Finale.

In director Chris Weitz's tale of how a group of Israeli secret agents and Nazi hunters, in 1960, found and captured Eichmann in Argentina with plans for him to be extradited to Israel for trial, Kingsley is quietly yet powerfully magnetic. Though composer Alexandre Desplat underlines Eichmann's horrific Holocaust deeds with sinister music cues, they're completely unnecessary, as the performer already exudes what author Hannah Arendt coined “the banality of evil” in his every careful movement and protracted silence. Kingsley's line deliveries, meanwhile, have a simultaneously taut and soothing inscrutability – at any given moment, Eichmann seems ready to either snap or nap – and screenwriter Matthew Orton has the welcome nerve to even give the guy jokes. You sense that Eichmann has been living in fear of capture for so long that, when he finally is caught, it's practically a happy relief. (This Eichmann cracks wise even with a straight razor to his throat.)

But Kingsley is almost too entertaining here. His scenes opposite Eichmann's chief captor, Oscar Isaac's Peter Malkin, are presented with much the same cat-and-mouse electricity of the Clarice Starling/Hannibal Lecter encounters in The Silence of the Lambs. There's a big difference, however, between enjoying the blasé debauchery of a fictional cannibal and that of a real-life executioner of millions. And at too many junctures in Operation Finale, you sense the filmmakers employing the Holocaust and its perpetrators in the service of a pretty standard revenge thriller with prescribed Hollywood beats. The formula works, at least well enough for Weitz's movie, yet there's still something more than a little unsettling about the Eichmann atrocities being the focal point for a beat-the-clock narrative that suggests a Bizarro World spin on Argo. 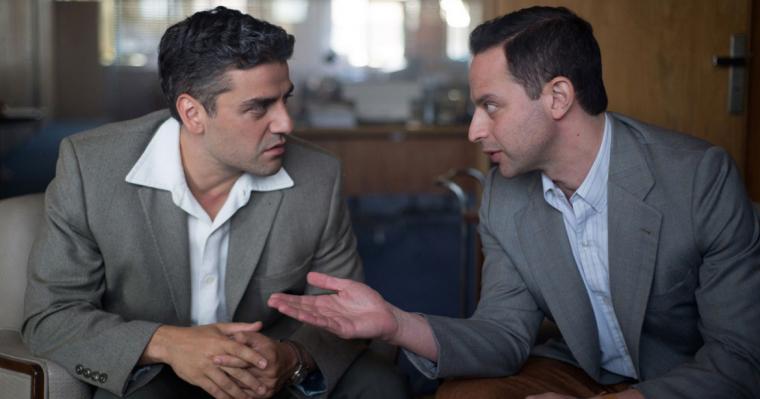 Isaac is a wildly charismatic performer who, like Kingsley, can seemingly become any nationality or ethnicity at will, and the Guatemala native is effortlessly believable as an Israeli living in a constant state of mourning for the sister, and her children, he lost during the Holocaust. Regrettably, however, Isaac's Malkin has also been made a prototypical Grieving Action Hero complete with a hotheaded nature, unorthodox methods, and a convenient ex-girlfriend (Mélanie Laurent) with whom he can playfully spar. Add the involving yet rote chase scenes, cliffhangers, and secret-agent brouhaha, and the movie all but promises to be the first in a globe-trotting Peter Malkin: Nazi Hunter franchise.

Yet despite its predictable nature and occasionally unfortunate blitheness regarding historical horrors, Operation Finale is at least well-made and sincere, and boasts plenty of incidental diversions. Such as the pairing of the charming Haley Lu Richardson and Joe Alwyn as youths whose burgeoning romance indirectly leads to Eichmann's capture. And the legitimately delightful sequence, set to kicky tango music, of spies passing information in a crowded café. And the sardonic, soulful Israeli agent Rafi Eitan, who's played, with winning modesty and tact, by comedian Nick Kroll. Oh-h-h-h … hello-o-o! 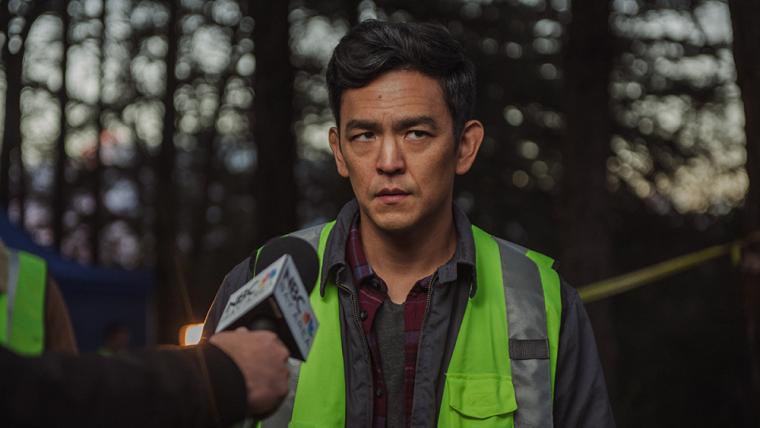 Writer/director Aneesh Chaganty's thriller Searching unfolds wholly on laptop screens through FaceTime and numerous social-media platforms, and those with good memories – hell, even those with really shaky memories – might recall the same presentational style employed a mere six weeks ago for the horror sequel Unfriended: Dark Web. But Chaganty's film is like your grandma's Unfriended – slower, more deliberate, and vaguely reminiscent of the CBS procedural of your choice.

After an Up-esque prelude detailing a beloved wife-and-mother's passing and updates in Internet technology since the dawn of the 2000s, the film finds the teen daughter (Michelle La's Margot) of a protective single father (John Cho's David) mysteriously vanishing, with Dad consequently forced to play online detective, searching his child's social-media history for clues to her disappearance. It's a moderately clever premise, and while the social-media toggling we witness isn't delivered with the speedy sophistication and multiple screens of the Unfriendeds, that actually works in the movie's favor, considering the person doing the toggling is a 40-something so out-of-touch that he has to ask, “What is a Tumblr?” (In a lovely touch, David Googles the word's definition adding an “e” between the “l” and “r.”) Events grow more complicated, and considerably more logic-defying, in the scenes involving Debra Messing's decorated Detective Vick, who puts David to work on leads that she should really be pursuing herself. And while Chaganty's and co-screenwriter Sev Ohanian's plot twists exponentially grow in Searching's final quarter, about half of them are questionable to the point of downright goofy, with the finale delivering one of those endless-exposition explanations that have been annually marring screen thrillers ever since Psycho.

Still, the movie works, in large part because the camera almost never leaves the face of John Cho, even if he's merely seen in a lower-right box during a FaceTime conversation. Chaganty and Ohanian supply a bunch of terrific social-media gags – one of the most winning coming at the expense of Justin Bieber – and inspire numerous grins of recognition, as when text-message misspellings are immediately rectified with correct spellings accompanied by asterisks. And while there's a lot of invention on display in David's escalating tech savvy (the film all but offers parents a how-to manual on logging onto their child's Facebook page) and the social-media responses to Margot's predicament (conspiracy theorists on Reddit have a field day), Chaganty also builds and sustains tension admirably, especially during a nerve-wracking scene of David ignoring an incoming call from an obviously distressed Detective Vick. But little of Searching would work quite as well without a central performance as solid and empathetic as Cho's, whose increasingly desperate readings are thoughtful and heart-rending, and whose crow's feet suggest a lifetime of sorrow even before his child disappeared. This is easily the finest big-screen showcase Cho has yet had … though I do say that with acknowledgment and apologies to fellow lovers of the Harold & Kumar series. Who's up for crowd-funding a Searching 2 in which Cho hunts for a missing Kal Penn?

I've seen worse movies this year than Kin, directors Jonathan and Josh Baker's tale of a 14-year-old (Myles Truitt's Eli) who finds and steals a futuristic laser blaster, and who, along with his ex-con brother (Jack Reynor), embarks on a cross-country trek tailed by law enforcement, loan sharks, and the weapon's otherworldly owners. But I haven't yet seen a 2018 release with trailers quite so misleading, considering that the previews promise laser-warfare comedy and this desperately unfunny film doesn't even let its laser fire until more than an hour has passed. Nor have I seen a 2018 release quite so confused about tone, with screenwriter Daniel Casey's mawkish, boring, kitchen-sink drama involving the estranged brothers' theoretical bonding completely mismatched with the occasional sci-fi, slapstick, and thriller elements.

To be sure, I haven't seen a film performance this year more obnoxious than Reynor's; the actor may resemble Chris Pratt's unkempt baby brother, but here, at least, he doesn't posses one-tenth of Pratt's lovable-rogue charisma. And I certainly haven't seen a sillier psycho-villain portrayal than James Franco's as a tattooed loon hell-bent on avenging his sibling's death – a grossly mannered, ineffective turn that makes you ask, “What was Franco thinking/not thinking/smoking right before the Bakers yelled, 'Action!'?” I haven't seen women treated this abysmally on-screen in ages, with Zoë Kravitz humiliated as an exotic dancer with a heart of gold and the great, third-billed Carrie Coon not allowed to show up until the final 10 minutes. No 2018 offering I've seen has boasted uglier PG-13 violence, or more stagnant pacing, or more charmless moments masquerading as charming, or a finale this out-of-the-blue laughable. (Arriving unexpectedly and just as quickly departing, a mysterious figure played by Michael B. Jordan delivers last-minute exposition suggesting sequels in the offing, telling Eli, “We'll be seeing you again.” I wouldn't count on it, Mike.) And while I detested this past spring's assault thriller Traffik to no end, at least it was clear who the film's target audience was meant to be; in regard to who might enjoy the Bakers' staggeringly confused outing, I honestly haven't a clue. You know what? I take it back. I haven't seen a worse movie this year than Kin.