Ease on Down the Road: Five Screen Adaptations If You're Missing Summer Musicals 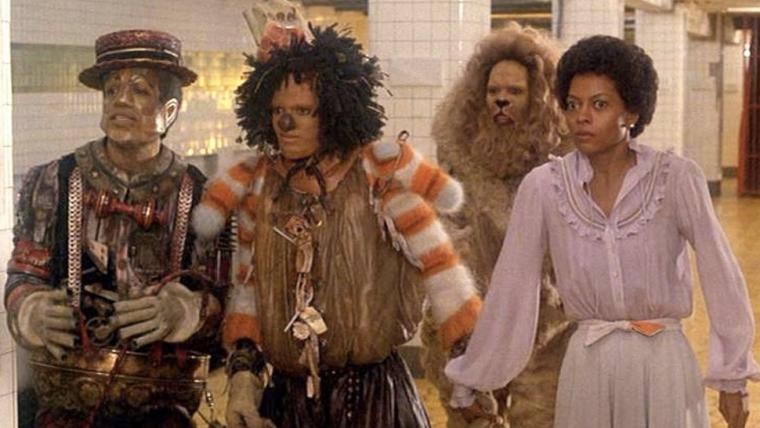 Had things gone according to plan, this past Friday would've marked the opening day for a play I'd been scheduled to appear in since last fall. Did you hear, though? Things didn't go according to plan! Just like those of umpteen thousands worldwide, my summer-theatre plans got shelved this year. So most of our cast instead met online for a virtual performance of the script – an experience that was enormous if somewhat melancholy fun, and that made me grateful that we were taking on a play instead of a musical. A Zoom gathering for a six-character comedy is reasonable enough. But what happens when you meet for a virtual entertainment with dozens of performers all singing at once? How do the Zoom genies know who to focus on?!

It goes without saying that in a typical season, we'd already be hip-deep in locally produced song-and-dance offerings, and like most stage fans I know, I'm already feeling the loss. So while we continue to hope that current plans remain in place and summer theatre might actually resume by mid-August (fingers crossed!), here are some home-viewing options: five of my favorite stage-musical adaptations from the personally formative years of 1978 to 1986. Don't judge me for the first inclusion. I used to hate it, too. 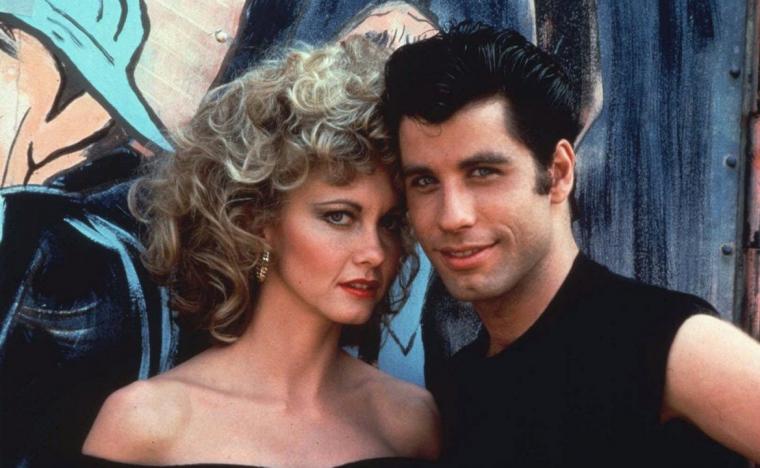 Grease: It feels weird to have a complicated relationship with a musical as profoundly, dementedly silly as this one. But there you have it: I loved Grease as a kid (“High school looks fun!”), was embarrassed by it as a teen (“High school isn't like that!”), loathed it as a 20- and 30-something (“Sandy lands Danny by becoming a tramp?!”), and now, in middle age, find it utterly charming, and even kind of touching. (“Aw-w-w … look at those nerdy kids trying to act tough!”) Yet even when I took great pleasure in pooh-poohing this material, director Randal Kleiser's 1978 mega-hit movie version remained pretty irresistible, and has become more so given that its performers who looked way too old for high school now appear almost unspeakably young. A triumph of screen charisma over mediocre presentation (and common sense), Kleiser's eternally watchable vehicle for John Travolta and Olivia Newton-John is a kick from animated opening credits to bizarre Chitty Chitty Bang Bang finale, with the actors playing Rydell High's T-Birds and Pink Ladies wisely treating their self-proclaimed bad-assery as mere wishful thinking. Meanwhile, as a reunion for priceless talents of the '40s through '60s (Eve Arden, Sid Caesar, Frankie Avalon, Joan Blondell, Alice Ghostley, Dody Goodman), it'll always be the one that I want. Ooo ooo ooo. Most Memorable Numbers: (3) “There Are Worse Things I Could Do,” for Stockard Channing demonstrating how to make a maudlin, forgettable song work through emotional intelligence and commitment; (2) “Born to Hand Jive,” for Travolta doing the splits and Arden dancing alongside him; and (1) “Summer Nights,” for being the movie's catchiest song and finest showcase of Travolta's ability to play cool and mock cool in the same breath. His comically orgasmic “Uh-h-h-h ...!” at the finale is a karaoke requirement for a reason. 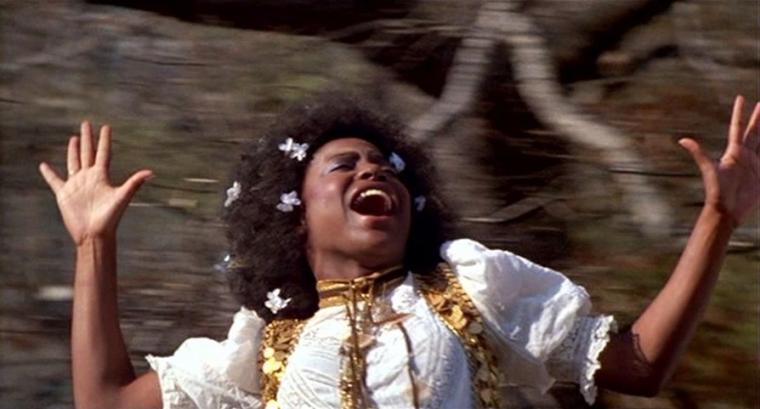 Hair: After it began streaming on Prime Video, I returned to director Miloš Forman's 1979 counterculture musical for the first time in decades. And while I don't consider myself a prude, I found myself shocked – shocked! – by what a PG-rated movie used to get away with. So much nudity! So many drugs! Such language! (Can anyone say “cunnilingus” in a PG release now, let alone sing it?) Adding the sight of Treat Williams – his shirt unbuttoned to his navel – undulating in front of Mrs. Garrett from The Facts of Life, and after 41 years, Hair might still stand as one of the raciest movie musicals ever made. Thanks to Gerome Ragni's and James Rado's spectacular score, it's also one of the most consistently enjoyable, right up until a tragic case of mistaken identity sends Williams' Berger off to Vietnam. Yet while the climax delivers a massive gut punch, most of Forman's ode to hippie culture remains pure bliss, with Twyla Tharp contributing spirited choreography and the timeless tunes (“Good Morning Starshine,” “Let the Sunshine In,” the exuberant title track) soulfully sung by John Savage, Annie Golden, Cheryl Barnes, Dorsey Wright, and the fabulous Beverly D'Angelo a year before she played Patsy Cline in Coal Miner's Daughter. Like Patsy, Hair delivers sweet dreams, too. Most Memorable Numbers: (3) “Aquarius,” for Ren Woods' glorious wailing causing even the horses to dance; (2) “I Got Life,” for Williams being the least likely, most anarchic guest ever to wind up at a posh dinner party; and (1) “Black Boys / White Boys,” for the incomparable Nell Carter, and for Forman's decision to have the vocals split between those flirty women in Central Park and those lascivious military men gawking at their naked draftees. It's so politically incorrect. It's so funny. 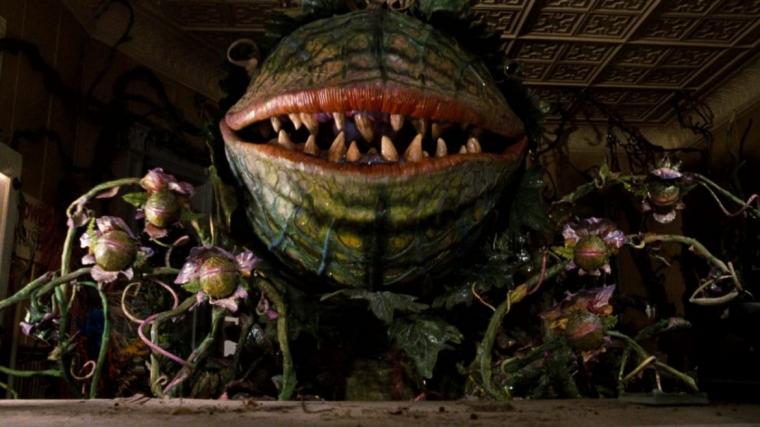 Little Shop of Horrors: When I began attending Augustana College in the fall of 1986, my fellow theatre majors and I became obsessed with three stage-musical soundtracks. One was Hair, because our department was staging the show in the spring. Another was a bootleg recording of an epic tragedy that premiered in London the previous autumn – something called Les Misérables. And the third was a cheeky off-Broadway hit based, totally inconceivably, on a tacky Roger Corman horror quickie from 1960. So began my adult-life-long affair with Little Shop of Horrors, everyone's favorite tale of boy, girl, and mean green mother from outer space. Arriving at the tail end of 1986, director Frank Oz's film version irritated my friends and me just a bit, considering the stage production's bleak ending was – surprise! – nixed by Warner Bros. in favor of a traditionally happy one. But it was impossible to be irritated for long, and 34 years later, it's impossible to be irritated at all. Rick Moranis at his most endearingly awkward! The singular miracle that is Ellen Greene! Steve Martin as a sadistic dentist! John Candy! Christopher Guest! Bill Murray! Plus, a cavalcade of deliciously appealing Howard Ashman and Alan Menken songs years before the legendary duo collaborated on Disney's The Little Mermaid and Beauty & the Beast. I could watch this thing every day with little complaint. If our live-theatre embargo lasts much longer, I may have to. Most Memorable Numbers: (3) “Feed Me,” for our first audience with the fully-grown man-eating plant Audrey II and Levi Stubbs' seismically insinuating baritone; (2) “Suddenly Seymour,” for those opening piano notes that get me sniffling every damned time; and (1) “Somewhere That's Green,” for convincing me that studio interference was maybe smart. After watching Greene perform this heartbreaker, Audrey's demise would've totally pissed me off. [June 23 update: I'm attaching links to Ellen Greene's performances in New York City's 2015 Civic Center presentations of "Suddenly Seymour" and "Somewhere That's Green" so you can witness further evidence of the (almost literal) eternal awesomeness of Ellen Greene. And because Seymour is played by Jake Gyllenhaal. Needless to say: worth watching.] 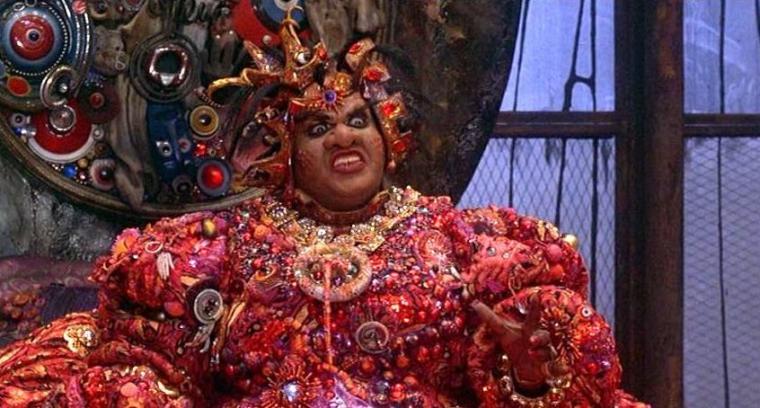 The Wiz: This 1978 Wizard of Oz update might be the unlikeliest title on Sidney Lumet's résumé, given that the director of so many gritty dramas never made another musical, and certainly wasn't a logical fit for an R&B-fueled production with an all-black cast. Yet even though the direction is probably its weakest element, The Wiz makes sense as a Lumet project for being one of the New York-iest film musicals ever made – it might even be New York-ier than Scorsese's New York, New York. Judy Garland's Dorothy went to Oz, but Diana Ross' goes to Manhattan, and it's in the ravishing urban sprawl that this familiar fantasy feels electrifyingly new … though with talents this exceptional, and numbers this peppy, Lumet could have filmed his cast in front of blank walls and achieved similarly transfixing results. You may be iffy-at-best on Michael Jackson these days, even if it's worth remembering how affecting he is as a timid Scarecrow with limbs as elastic as rubber bands. Yet there are loads of additional treasures here: Ross grinning and weeping in her showcase “Home”; Ted Ross roaring his way through “I'm a Mean Ole Lion”; the devastatingly beautiful Lena Horne delivering gospel encouragement in “Believe in Yourself.” All this and Richard Pryor, too. Television's 2015 The Wiz Live! was great fun. This is great fun and movie history combined. Most Memorable Numbers: (3) “Slide Some Oil to Me,” for Nipsey Russell's joyous vaudeville teaching pre-teen me that the man had gifts beyond his breeziness on afternoon game shows; (2) “Don't Nobody Bring Me No Bad News,” for that force of nature Mabel King; and (1) “Ease on Down the Road,” for being as hummable and tonally appropriate for its movie as “Follow the Yellow Brick Road” was for its … but without Munchkins. 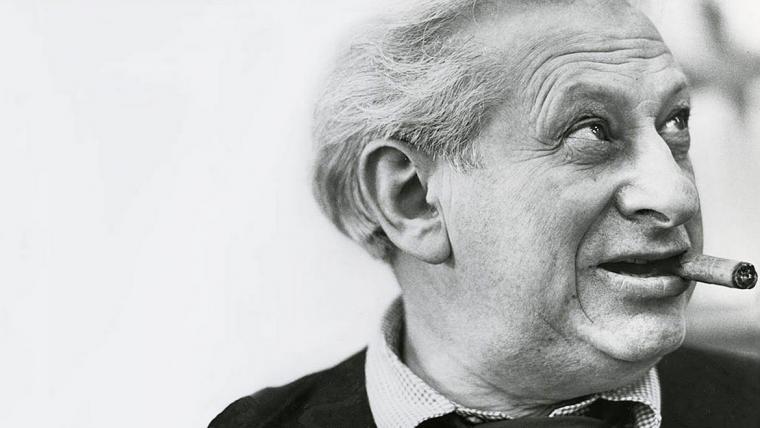 Working: Admittedly, I'm cheating with this selection, as directors Kirk Browning's and Stephen Schwartz's 1982 musical based on Studs Terkel's celebrated nonfiction was a 90-minute episode of PBS' American Playhouse and not a direct-to-theaters movie. Yet I'm including it anyway, given that (a) no other Working film exists and one should, and (b) fans of musicals could do a lot worse than this multi-narrative delight with compositions by Schwartz, Richard Rodgers' daughter Mary, and James freaking Taylor. A series of solo numbers and monologues on mostly blue-collar and middle-class living, the show might sound like a repetitive bummer. It plays beautifully in performance, however, and if you were alive and watching TV in the '70s and early '80s, recognizing its lineup of familiar actors is like playing "Where's Waldo?" if every person in the picture is Waldo. Look! Barry Bostwick as a steel worker. Barbara Barrie as a grade-school teacher. Scatman Crothers as a parking attendant. Plus so many more: Beth Howland from Alice, Charles Haid from Hill Street Blues, Charles Durning, Barbara Hershey, Didi Conn, Lynne Thigpen, Edie McClurg, Terkel himself … . And they all show up before Patti LaBelle rips into her 11 o'clock number. Not all of their characters' jobs look appealing. The job of working on Working looks like a blast. Most Memorable Numbers: (3) “It's an Art,” for the continual pleasure of Rita Moreno in musical mode; (2) “If I Could've Been,” for its chorale of individual voices as effective an act break, for its material, as Les Mis' “Do You Hear the People Sing?”; and (1) “Millworker,” for the evident physical toll in Eileen Brennan's nine-to-five employee made cathartically wrenching in Taylor's music and Jennifer Warren's vocals. Of all of Working's numbers, this one is the least “fun.” It's also, maybe, the most essential.