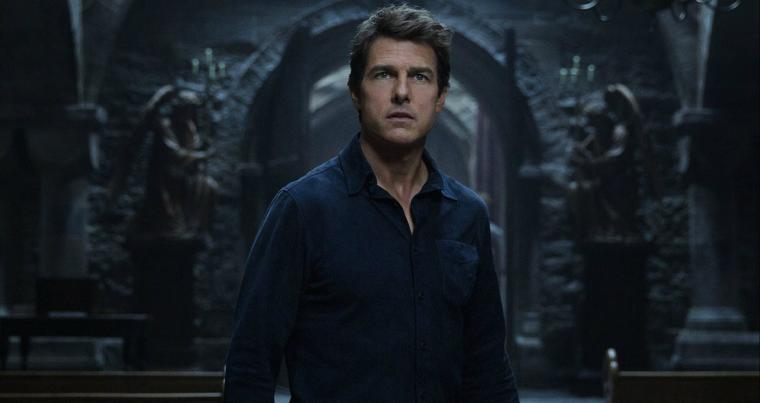 Tom Cruise in The Mummy

Director Alex Kurtzman’s The Mummy aims to be an action blockbuster, a supernatural freak-out, a tongue-in-cheek comedy, a tentpole-starter, and the ultimate Tom Cruise vehicle all at once, and I have to give it a weird kind of credit, because I never imagined a film could fail so spectacularly on quite so many levels. The awfulness on display isn’t depressing or enraging so much as jaw-dropping; you stare at the cheesy effects and listen to the risible dialogue and watch Cruise’s attempts at Jedi-mind-tricking us into having fun, and all the while you’re asking yourself, “What the hell were these people thinking?!” There’ve been plenty of studies on whether screen violence makes viewers more violent, but someone should really do one on the effects of something this mind-numbingly stupid. After 110 minutes of The Mummy, God knows I was looking for something or someone to punch.

To even try to describe the narrative is to risk losing precious brain cells, so I’ll keep this brief. (If you want a more thorough take, read Wikipedia’s plot synopsis ... and be sure to bring smelling salts.) There was this ancient Egyptian named Ahmanet, see, who sold her soul to a demigod and became such a vindictive, murderous witch that she was eventually wrapped in cloth, encased in a coffin, transported to Mesopotamia, and buried alive. Thousands of years later, in present-day Iraq, the rakish prick and self-proclaimed “liberator of precious antiquities” Nick Morton (played by you-know-who) unwittingly releases Ahmanet’s spirit from her tomb. Bad stuff ensues. And unfortunately, the unluckiest victims of all that bad stuff turn out to be us.

The Mummy’s first 15 minutes certainly hint at forthcoming tonal inconsistencies, given that Russell Crowe’s grimly portentous, tedious narration in the prelude leads directly to blockbuster-minded bombast with wisecracking military looters Cruise and Jake Johnson ducking bullets, outrunning fireballs, and – in a charming touch – ensuring their safety by ordering an air strike on an Iraq village. Oh, but Kurtzman and company haven’t yet begun to confound. In short order, Johnson is bitten by a spider, possessed by a demonic entity, and transformed into Griffin Dunne in An American Werewolf in London – a sardonic, slowly rotting Cassandra visible only to Cruise. Cruise himself gets possessed, kind of, and hunted by Ahmanet in between his flirtations with Annabelle Wallis, his obligatory need to Become a Better Person, and his three opportunities to appear shirtless. Crowe shows up in the flesh as Dr. Henry Jekyll, a monster hunter with something to Hyde. 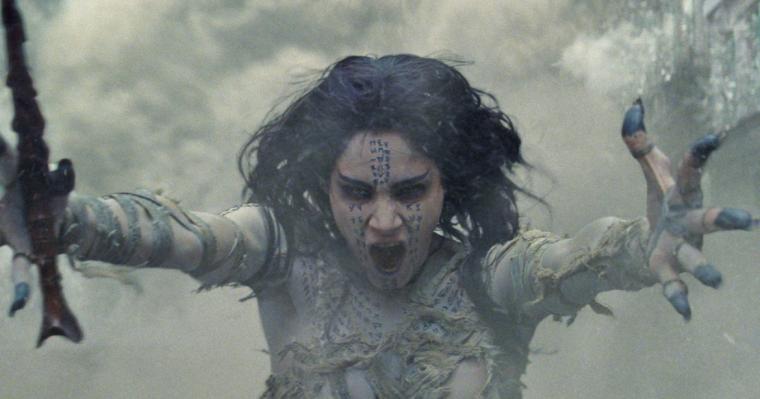 Meanwhile, do you like zombies? The Mummy’s got ’em, as the power of Ahmanet’s tongue kiss turns those she smooches (and it’s a long list) into lumbering masses of skeletal servitude. You like Indiana Jones? This thing’s got loads of supernatural mumbo jumbo and sarcophagi and sand. You like the Mission: Impossible flicks? This is practically the franchise’s sixth installment, boasting a jet-plane freefall and spine-cracking physical combat and an extended scene of Tom Cruise – it’s really him doing it! – outswimming underwater pursuers. You like the finale to The Dark Knight? This has the exact same one, only this time it’s ridiculous! If, however, you like the 1932 version with Boris Karloff, the 1959 version with Christopher Lee, and/or the 1999 version with Brendan Fraser, you still might not find much to like in this new take on The Mummy. As it’s wholly devoid of scares, imagination, and campy humor, all that Kurtzman’s outing really has in common with its precursors is a title.

In fairness, I will say that Sofia Boutella is an occasionally striking Ahmanet, both for her teasing nastiness and for sounding uncannily similar to Marion Cotillard in her purring-for-Nolan roles. Plus, it’s always a pleasure to see Courtney B. Vance, even when all he’s playing is the token Black Guy Who Dies First. But the movie is so excruciatingly incoherent and ineptly assembled that it routinely quashes whatever tentative goodwill you’re willing to bring to it. For a film with six credited screenwriters, there may be punchlines, but there’s also a criminal lack of anything resembling wit. (Doing the math based on the number of honest chuckles I got from the experience, those six authors contributed exactly zero good jokes apiece.) And while I’d love to simply shrug this off as a one-and-done loser, Hollywood, naturally, has other ideas, clearly setting the film up for sequels and an entire franchise of “Dark Universe” showcases for Dracula, Frankenstein, the Invisible Man, and other creatures from Universal Studios’ intellectual-property crypt. The Mummy may only be 110 minutes, but we could easily be feeling its mercenary and senseless effects for years. 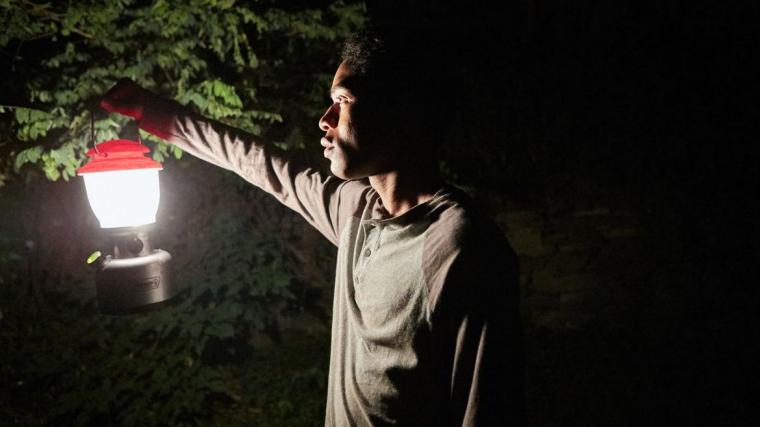 IT COMES AT NIGHT

Ordinarily, I’m sympathetic toward intensely well-made movies – think Lynch’s Mulholland Dr. or half of the Coen brothers’ oeuvre – whose climaxes inspire patrons to react with audible bewilderment. But when my screening of writer/director Trey Edward Shults’ It Comes at Night ended and a nearby patron groused, none too quietly, “What the f--- was that?!?”, I had to admit she had a point; the film is all exquisite setup without anything – at least anything satisfying – in the way of payoff.

Although deliberately sketchy in its details, Shults’ horror thriller takes place not long after a virus has presumably eliminated a great swath of humanity, with a family of three – dad Joel Edgerton, mom Carmen Ejogo, and 17-year-old son Kelvin Harrison Jr. – holed up in their spacious country home complete with boards on the windows, gas masks, and lots and lots of guns. Before long, a stranger (Christopher Abbott) arrives at the door seeking water and supplies for his wife (Riley Keough) and pre-schooler son (Griffin Robert Faulker), and eventually, with maximum wariness, the visitors are invited to stay. By this point, given Shults’ dream imagery and slow, creepy tracking shots through dark corridors and into the surrounding forest, it’s easy to imagine the movie going in any number of directions. Will there be zombies? Backwoods lunatics? The Cloverfield monster? Or will the horror come instead from the strangers themselves, who, in private moments, seem just a little too playful for their post-apocalyptic circumstances?

It may not be a spoiler to say the nightmare comes from none of the above. But it might be a major one (and I’m taking the risk regardless) to say it actually comes from nothing. Rarely have I seen a fright film so determined to avoid titillation and astonishment and catharsis – genre tenets that frequently deliver a good time. This thing, however, is like Eli Roth’s Cabin Fever as directed by Lars von Trier. Even though It Comes at Night is only his second feature, Shults obviously knows where and how to position his camera for maximum discomfort, his employment of subtly scary sound effects is masterful, and he does tremendous work with his actors. (Abbott is particularly strong, and Harrison, who serves as audience surrograte, has a heartbreaking emotional immediacy and transparency that would’ve made him an excellent fourth Chiron in Moonlight.) Yet while the movie was supremely polished and I quite enjoyed its refusal to answer basic questions – Who are those shotgun-wielding hunters? What is the family dog barking at? – I started getting the uncomfortable sense, about an hour in, that the narrative was just spinning its wheels building dread without much interest in what comes after dread. And by the final scenes, it was evident that all this build-up was merely in service of a banal horror-movie question (“What are desperate people capable of?”) with an even more banal answer (“Just about anything”). Hell, we never even find out what the titular “It” refers to. Unlike my fellow patron when the credits rolled, I felt I knew precisely what the f--- this frustrating exercise in miserabilism was. I just didn’t care. 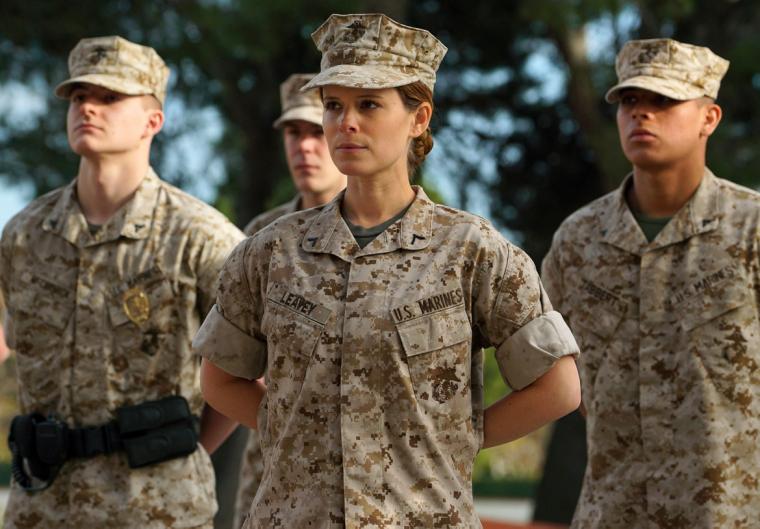 The first preview I saw for Megan Leavey – director Gabriela Cowperthwaite’s true-life tale of the bond forged between a prickly Marine and her devoted K9-unit German shepherd – landed not long after I endured that shameless, stultifying January hit A Dog’s Purpose. My memories of that film were still unfortunately fresh, and, consequently, when the Leavey trailer ended with its heroine saying she wanted to thank her pup Rex for teaching her what love was, I may have thrown up in my mouth a bit. But I’m thrilled to report that Cowperthwaite’s wonderfully tough-minded and moving drama isn’t unfairly manipulative, pandering, or embarrassing; it’s so much the polar opposite of A Dog’s Purpose that it may as well be a cat.

Don’t get me wrong: There was ample sniffling heard in my auditorium during emotional peaks, and Cowperthwaite and her trio of screenwriters (Pamela Gray, Annie Mumolo, and Tim Lovestedt) aren’t above employing Rex’s loyal gaze and mournful howl to get Megan, and us, all weepy. Yet what’s most affecting, and frankly astonishing, about the movie is how unforced it is, and how commendably matter-of-fact. (Although Megan Leavey opens in upstate New York mere weeks, or perhaps even days, after the 9/11 attacks, we only glean that information when a radio announcer mentions the Yankees heading to the World Series.) As played by Kate Mara with devastating empathy and commitment, Megan has no time for, or interest in, sentimentality, and neither does her film. Megan’s initial depression and decision to enlist are handled at the start in a speedy five minutes; her tenure at boot camp is taken care of in a brisk, elegant montage. And when Cowperthwaite’s outing turns into a detailed and precise military procedural about K9 units and their IED- and artillery-hunting heroes, there’s not a wasted minute to be found; even a simple late-night game of cards with a potential love interest played by the marvelously winning Ramon Rodriguez delivers necessary backstory and levity. (The mood of these scenes is hardly grim, however, with Tom Felton occasionally popping in as a fellow K9 handler and Common wonderfully quick, funny, and decent as Megan’s gunnery sergeant.)

Yet even after Megan and Rex are injured in Iraq combat and the action returns to the states, the movie remains clear-headed and subtly insightful regarding everything from Megan’s PTSD – with the group-therapy scene rendered especially beautifully – to her online and TV crusades to adopt Rex, and to her complicated relationships with her divorced parents. (While Edie Falco is slightly too shrill as Megan’s overbearing mom, Bradley Whitford is superb, and happily allowed to play an awesome dad after playing the world’s worst one in Get Out.) I don’t want to overpraise Megan Leavey for fear of building sky-high expectations toward what, in the end, is simply a well-executed melodrama smartly and honestly told. But after you’ve seen certain puppy-love movies go disastrously wrong, it does feel like something of a miracle to see one go almost faultlessly right. Good boy, Rex.