DVDs to Watch, and Watch Again: "The Squid & the Whale" and "The Dying Gaul" 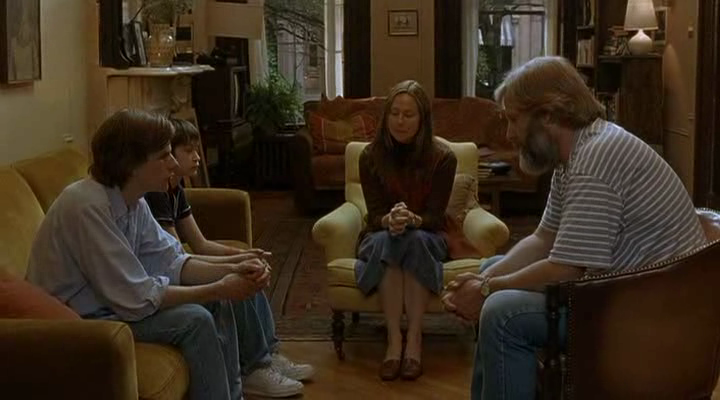 THE SQUID & THE WHALE and THE DYING GAUL

Before accepting his career-achievement prize at the Academy Awards this year, director Robert Altman - his voice-over accompanying clips from his works - explained his raison d'etre: "Stories don't interest me," he said. "Basically, I'm more interested in behavior." Considering his contributions to film, the admission made perfect sense - how do you adequately describe the story of M*A*S*H or Nashville or Short Cuts? But it also touched on something elemental about the movie-going experience, in terms of the emotional connections we often make with the characters on-screen. When these literally two-dimensional figures reveal themselves to be as complicated and unpredictable, as human, as we are - when we recognize their behavior with a laugh or a nod or a wince - "story" doesn't really matter a damn; the experience of watching characters just being can be its own spellbinding reward.

I love going to the movies. (Well, I saw the Larry the Cable Guy movie this past weekend, so I don't always love it ... .) But for full appreciation of performance - of behavior - in a movie, I actually prefer to watch films on DVD, both because of the intimacy of the DVD experience and because of a built-in advantage that home-viewing has over the cineplex: the rewind button. This past week, I've practically worn mine out watching and re-watching Philip Seymour Hoffman in Capote; aided by the movie's outstanding direction and editing, Hoffman's portrayal is so nuanced and well-calibrated that his scenes almost demand a second viewing - you can't believe the subtlety of the effects he's pulling off. Hoffman's work was no less extraordinary when watching Capote on the big screen - it's masterful, and seemingly effortless, work - but for me, it took DVD to make me fully conscious of the artistry behind the apparent lack of effort. The actor nails Truman Capote's speech patterns and mannerisms, yes, but he also does something far more substantial - Hoffman captures the character's behavior. Capote is endlessly fascinating because the filmmakers and the actor have fashioned a character who is endlessly fascinating.

Like Capote, and like Altman's best works, two new-to-DVD films - Noah Baumbach's The Squid & the Whale and Craig Lucas' The Dying Gaul - are compulsively watchable entertainments because of the insight they reveal about their characters' behavior; it's not the stories, but rather the people in the stories, that matter. Both movies should be seen, yet I'd argue that they should also be seen twice, particularly if you share my absorption with film performance - Jeff Daniels, Laura Linney, Peter Sarsgaard, Patricia Clarkson, Campell Scott, and several others are so breathtakingly committed to their roles in the two works, and create characters of such emotional and intellectual complexity, that the films' underlying sadness gives way to euphoria; after you've first taken in the movies' bitterness and acrimony, a repeat viewing allows you to luxuriate in the joy of the exquisite acting. The Squid & the Whale and The Dying Gaul are two of the most exhilarating downers I've seen in months. The first words we hear in The Squid & the Whale come from the pre-teen Frank (Owen Kline), and are spoken to his 16-year-old brother, Walt (Jesse Eisenberg): "Mom and me versus you and Dad." He's discussing a game of doubles tennis, but the line may as well serve as the plot summary for writer/director Baumbach's acridly funny domestic drama, which details how the divorce of the boys' parents, Bernard and Joan (Daniels and Linney), is reflected in the behavior of their kids. Bernard is the sort of literary blowhard who calls A Tale of Two Cities "minor Dickens" and refers to Kafka as "one of my predecessors," and Walt, who worships his dad, is a poseur in Bernard's vein; Walt's hateful attitudes aren't based on personal experience, but on his father's experience. Frank, meanwhile, acts out his misery over the divorce by siding completely with his mother, who is also an author (and engaged in several affairs during her marriage), and his anger comes out in messy, miniature explosions - he begins drinking, swearing, and masturbating with frightening vehemence.

There's considerable ache and torment in The Squid & the Whale, yet the movie is astonishingly easy to sit through because it's so human - the characters make horrible, painful mistakes all throughout the film, but Baumbach gives you permission to laugh at their foolishness, to recognize that foolishness as no different from our own. The movie gets at the shattering complications of divorce with precision, and the details feel exactly right - Walt's embarrassment at his "not gorgeous, but cute" girlfriend, whom his father subtly cuts down perhaps without even meaning to, is particularly (and comically) devastating. And, technically, The Squid & the Whale is wonderfully assured; the tricky editing, which often cuts away from the characters at the exact moment we expect a dramatic confrontation, gives the work an edgy momentum - the audience stumbles and lurches along with the characters.

But none of this would mean much without the actors' level of insight and inventiveness. Linney is so connected to Joan's resentment that she can speak worlds of emotion through her delivery of a single word (here, it's "burgers"), and Daniels, expressing decades' worth of dissatisfaction and self-loathing, does something nearly miraculous - he creates an odious, pompous bore with whom you empathize enormously. Along with the uncommonly fine Eisenberg and Kline, they form one of the most honest families the movies have seen in ages, and the writer/director has the grace and good sense to let this quartet be the film's story; after an initial viewing, you want to watch The Squid & the Whale again to revel in Baumbach's triumph at fashioning such fiercely believable figures, and to see how four terrific performers made Baumbach's accomplishment look so simple. The performers are also the reason to watch - and re-watch - The Dying Gaul, which concerns Byzantine levels of deception and sexual gamesmanship among a snarky Hollywood producer (Campbell Scott), his spirited wife (Patricia Clarkson), and the fledgling screenwriter (Peter Sarsgaard) they both form attachments to. Based on Lucas' deviously clever play, the film's stage origins are a little obvious, but it's a thrillingly vicious piece of work, because the performers are so delicately insidious that their characters' motivations become endlessly debatable. The movie only works if you buy into the actors' grief and lust and panic, and with Scott, Clarkson, and Sarsgaard (giving the most emotionally shattering performance of his film career), Lucas' film achieves some of the breathless, tragic grandeur that's more closely tied to opera than film. And your connection to the characters makes the movie continually surprising; the crux and arc of the story changes depending on which character's viewpoint you assume. If you're a fan of actors, The Dying Gaul - depressing and oblique as it often is - is a film you may want to own, for the same reason you'd buy an elaborate jigsaw puzzle; in the end, the pieces may fit the same way, but there's infinite variety in the manner by which you get them to fit.