Coma Toast: “The Big Sick,” “War for the Planet of the Apes,” and “Wish Upon” 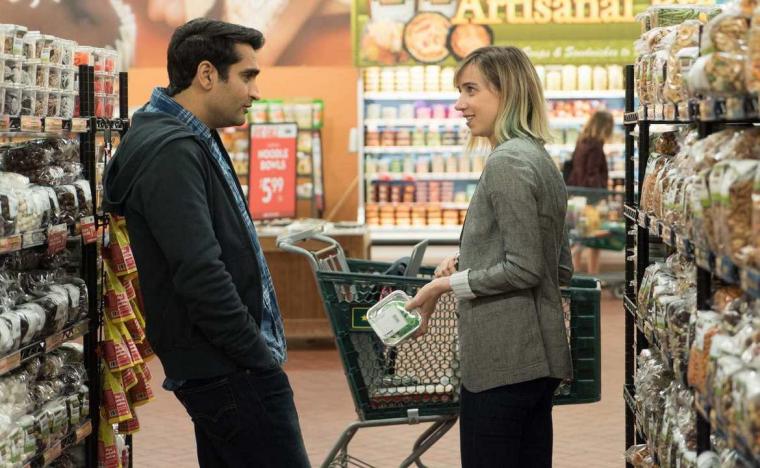 Kumail Nanjiani and Zoe Kazan in The Big Sick

When, exactly, did romantic comedies become extinct? I’m not even talking about “classic” rom-coms such as When Harry Met Sally... or Sleepless in Seattle, or that exceptional Julia Louis-Dreyfus/James Gandolfini charmer Enough Said from 2013 (the most recent example of a truly topnotch one I can think of). I’m talking about the genre as a regular staple of moviegoing, with headliners such as Sandra Bullock and Jennifer Lopez and, God help us, Katherine Heigl falling for lesser stars in vehicles that were once as abundant as Blumhouse horror flicks or crap reboots of ’80s TV shows. For anyone missing such offerings, I would direct you to director Michael Showalter’s The Big Sick, which just might stand as the most hysterical, moving, swoon-worthy rom-com of the millennium. For anyone not missing such offerings, I’d direct you to The Big Sick even more quickly, just so you can see what this genre is capable of when everything – and I mean everything – goes magically right.

Its story inspired by the actual courtship of married screenwriters Kumail Nanjiani (Silicon Valley’s Dinesh) and Emily V. Gordon, The Big Sick finds Nanjiani playing a loose version of himself as Kumail, a Pakistani-American stand-up who meets comedy-club patron Emily (Zoe Kazan). They fall hard for each other. Kumail can’t commit, as his parents (the unimprovable Anupam Kher and Zenobia Shroff) demand he marry a fellow Pakistani. Emily ends their burgeoning affair. And when a serious illness puts Emily in a medically induced coma, Kumail has to confront not only his heritage and lingering feelings toward Emily, but the arrival of Emily’s parents (Holly Hunter and Ray Romano), who are initially none too keen on spending time with the guy who broke their daughter’s heart. Aside from Jordan Peele’s framework for Get Out, this simple scenario proves to be, thus far, the movie setup of the year. The wickedly deadpan Nanjiani and luminous Kazan are a match made in rom-com heaven; at the screening I attended, you could almost literally feel the audience’s pleasure in their spiky, affectionate chemistry. But The Big Sick, in a wondrous happenstance, comes through with no end of delights as warm and rich and hilarious as our leads’ pre-coma rapport, from the tough-love support of Kumail’s fellow comics (the exceptionally awesome Krut Braunohler, Aidy Bryant, and Bo Burnham) to the lineup of Kumail’s prospective brides who are indistinguishable from job applicants, yet are still granted their dignity. Best of all, perhaps, are Hunter and Romano, both of whom supply reams of comedic warmth and texture, and both of whose voices should be immediately guaranteed eternal life in the Smithsonian. The Big Sick is sublime. I’ll come up with further superlatives after I’ve seen it seven or eight more times. 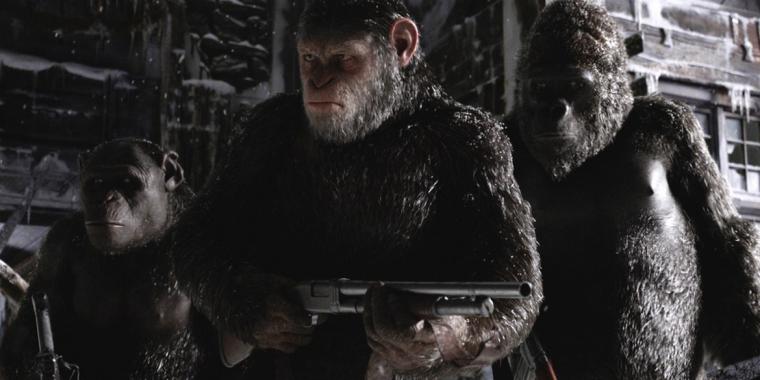 WAR FOR THE PLANET OF THE APES

This probably won’t sound like the compliment I mean it to be, but the visuals in War for the Planet of the Apes are so amazing that I frequently forgot to be amazed. Familiarity with them certainly played its part, as the film is, of course, the third in the rebooted POTA series that took simian expressiveness to previously uncharted heights in 2011’s Rise of the ... and 2014’s Dawn of the ... , the latter also helmed by War director Matt Reeves. Yet aside from a trio of significant humans and hundreds of unnamed military troops who may as well be CGI, nearly everyone we spend our 140 minutes with in this latest outing is an ape – and it’s rather astounding how quickly and completely we adjust to that. There are, to be sure, effects-driven marvels by the truckload. But at some point very early on, I stopped being wowed by them, and instead responded solely to what the effects were in service to: the unmistakable echoes of Vietnam (or at least movies about Vietnam) in the opening siege; the seismic grief and fury in the eyes of ape leader Caesar; the overwhelming sight of the ape masses, on foot and horseback, wandering an endless desert like Israelites in search of the Promised Land. Reeves and his technical team produce miracles of such matter-of-fact bravado that I was frankly ashamed when, halfway through the film, I found myself just a teensy bit bored and impatient with the narrative; it may be an unfortunate sign of these blockbuster-minded times that anyone could ever take images such as War’s for granted.

What I pray I’ll never take for granted, however, are blockbusters as thematically expansive, thoughtful, and spectacularly entertaining as Reeves’ fingers-crossed conclusion to the Apes saga – a work whose cumulative impact would be inarguably lessened by yet another sequel. (Not that that’s ever stopped Hollywood before.) Details of its Apes-versus-Humans storyline don’t really merit discussion, and would seem old-hat, anyway, to anyone who’s ever seen a John Ford Western. Beyond Ford, though, the movie boasts numerous callbacks to the Coppola of Apocalypse Now, especially in the mud-smeared, bloodshot visage of Woody Harrelson’s menacing colonel, a complicated sociopath with a messiah complex. There’s a bit of De Mille’s biblical epics and a touch of Cameron’s Aliens (the wide-eyed Amiah Miller plays a mute Newt), and loads of present-day ironic commentary in the “Build that wall!” subplot, with one scene featuring memorably ugly employment of “The Star-Spangled Banner.” And with necessary levity provided by Steve Zahn’s touching, laugh-out-loud-funny Bad Ape and Reeves’ compositional smarts and seriousness of intent helping mask numerous plot holes, War of the Planet of the Apes – silly and cornball though it occasionally is – proves unmissable for Andy Serkis’ triumphant take on series protagonist Caesar, whom the motion-captured actor turns into a figure of Lear-esque complexity and passion. Not for nothing, but King Lear didn’t require a sequel, either. 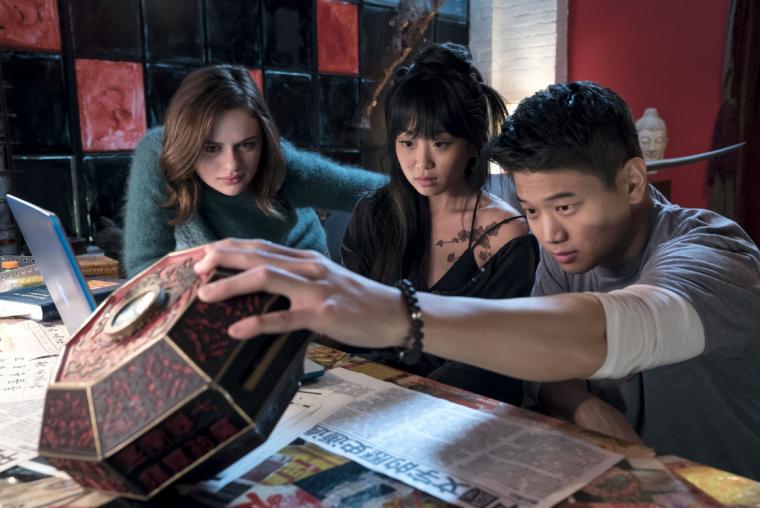 There are easily imaginable audiences for the teen shocker Wish Upon, among them those wondering what Ryan Phillippe has been up to lately, those wanting more from newly minted Emmy nominee Shannon Purser after Barb bit it on Stranger Things, and those loving the resurrected Twin Peaks who are still a tad antsy for the arrival of Sherilyn Fenn. As someone who falls into all three categories, I didn’t dislike director John R. Leonetti’s outing nearly as much as I probably should’ve.

Its “Monkey’s Paw” setup finds downtrodden Clare (Joey King) coming into possession of a Chinese wishing box and making several generic demands – for money, for popularity, for the cute boy in class – before realizing that each wish is being granted with an accompanying corpse. But while screenwriter Barbara Marshall is working with a potentially juicy and resonant “Be careful what you wish for!” conceit, the movie, unfortunately, isn’t at all scary. Leonetti frequently positions his camera at odd, intriguing angles, yet the requisite bangs and booms on the soundtrack are perfunctory at best, and at my screening patrons laughed at more than half of the (PG-13) killings even though comedy didn’t seem intended. A couple of those deaths, though, display some of the falling-domino verve that made the Final Destination series so oftentimes enjoyable, even if one of them does find my beloved Sherilyn at the business end of a kitchen disposal. The slow, self-motivated opening of the wishing box’s lid, in a giggly touch, suggests a hand-carved Audrey II eager for its next meal. And although King’s confusion and panicked terror read like the physical embodiments of a scrunchy-face emoji, she’s surrounded by others who feel just right, including Purser and Sydney Park as her besties, Ki Hong Lee as her grade-school pal, Mitchell Slaggert as a stalker jock, and Alice Lee as a Chinese-history guru with – sigh – a passion for wontons. Plus Phillippe, whom I didn’t recognize for two full scenes, mostly because I couldn’t fathom a world in which this guy is now getting roles as disheveled dads in low-rent chillers for the under-17 set. Wish Upon is silly, throwaway, and eminently forgettable. I didn’t, however, have a bad time at it, even if I did leave craving my own Chinese tchotchke on which I could wish that high-school-flick casting didn’t routinely make me feel 100 years old.