"Bowling for Columbine" and "Adaptation" Challenge, but Don't Let That Scare You: Also, "Maid in Manhattan" and "Two Weeks Notice" Michael Moore's latest, the astounding documentary Bowling for Columbine, has finally made it to our area (it's currently playing at the Quad Cities Brew & View), and although I spent a couple hundred words extolling its merits last month in the Reader - where I named it my favorite movie of 2002 - the film is so good that a few hundred more seem necessary.

By way of convincing reluctant viewers that Bowling for Columbine is currently the movie to see, let me alleviate some fears for people who immediately cringe upon hearing the word "documentary." I can certainly understand those who prefer their cinematic entertainment to be entertainment, and who only want their movies to be light, escapist fare; as my mother has told me whenever I recommend a Vanya on 42nd Street or an Unbearable Lightness of Being: "I get enough drama in life." Documentaries, therefore, are tricky animals, because as thrilling as works such as The Thin Blue Line, American Dream, and Brother's Keeper are, they require audiences to do a little work for themselves; they're the antithesis of "escapist." Your feelings and prejudices about the film's subject matter - in Columbine's case, firearms in America - are being directly addressed and challenged, and for those who don't wish to think while watching a movie, viewing a big-screen documentary can seem like a laborious waste of time: "I can see the same thing on PBS for free."

All audiences, though, love a good laugh, and most love a good cry, and I think it's safe to say that Bowling for Columbine provides a surfeit of both. For Michael Moore is, under his muckraking exterior, an entertainer first and foremost. Though much of the footage he shows and the statistics he trots out are irrefutably heartbreaking, Moore knows exactly when to temper this material with humor, both lowbrow and enormously clever. (The biggest laughs I heard in all of 2002's movies came from a scene in Columbine in which Moore shows us a real-life instructional video on how improper dress at schools, such as loose-fitting shirts and baggy pants, might mean kids are concealing firearms; a young boy of about 11 or 12 demonstrates, pulling from his clothes enough firearms to make Charlton Heston himself wet his pants.) At the same time, whenever the film threatens to become too ridiculous or self-aggrandizing, Moore pulls back, revealing an enormous empathy with those onscreen, even those he might - initially - be appearing to mock. (An interview with a Columbine-based security-system provider begins jokingly and ends up emotionally overwhelming.) In lesser hands, this style could be uneven at best, schizophrenic at worst. Yet in Columbine, Moore displays the ability to make everything he explores, the horrific and the hilarious, feel connected. The movie has a thrilling, kaleidoscopic feel and a true universality; Moore is saying, "We're all in this together - isn't it funny, and scary, and sad?" Documentary or not, Bowling for Columbine is the most wildly entertaining movie of 2002; it's merely a bonus for audiences that it also happens to be the most thought-provoking. 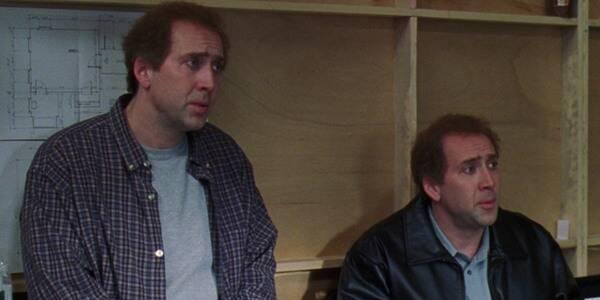 You might have heard that the Spike Jonze/Charlie Kaufman comedy Adaptation is confusing. It's not. Steroidal action movies are confusing. (What does the microchip do? Who wants it? Why is everyone shooting each other?) Adaptation is merely complex. It's also one of the wittiest, funniest, most original comedies you're likely to see. Like the duo's previous collaboration, 1999's Being John Malkovich, Adaptation spins its tangled web through both fictional and "real" life, serves as an insightful analysis on the nature of celebrity, and offers its actors a chance at some high-comic roles they're rarely given. It's simply terrific.

Lest I frighten off the unadventurous, let's keep the synopsis simple: A screenwriter (Nicolas Cage) is hired to adapt an unadaptable book into a screenplay, and suffers such a terminal case of writer's block that he ends up writing himself and his twin brother (Cage again) into the script, while in the movie we're watching, the book's real-life protagonists (Chris Cooper and Meryl Streep) enact both their own drama and the one that the screenwriter has concocted for them.

Ah, jeez, even that makes the movie sound impossible to follow. Let's skip the synopsis. Suffice it to say that Jonze is such a wizard at meticulously guiding audiences through alternate realities, and Kaufman is so brilliant at establishing unlikely storylines and bizarro dialogue yet making them sound reasonable, that you sit through Adaptation grinning in sheer enjoyment, and although opinions are certain to differ on the film's finale - I think it's marvelous, precisely because the film doesn't give you the information you assume it's going to - the strength of the performances is unquestionable. Normally, two Nicolas Cages would be twice the annoyance for me, but he comes up with two remarkably nuanced and fresh interpretations - it's his best work since 1987's Raising Arizona - and in a perfect world, Chris Cooper and the wickedly clever Meryl Streep would have Oscars in the bag. (In addition to these three, there are smart appearances by Tilda Swinton, Ron Livingston, and star-to-be Maggie Gyllenhaal, so delightful that she can steal a scene by doing next to nothing.) Like Columbine, it's not a movie for those who don't want to feel alive while watching it; those who do will probably find it one of the year's most rewarding cinematic experiences. I avoided them long enough, so here's my brief take on Maid in Manhattan and Two Weeks Notice: If you're in the market for an easygoing, brainless romantic comedy, it doesn't matter which one you choose, because they're pretty much the same movie. Both are opposites-attract comedies - Manhattan's maid Jennifer Lopez falls for cultured congressman Ralph Fiennes; Notice's leftist lawyer Sandra Bullock falls for super-rich cad Hugh Grant. Both are chock-full of "colorful" supporting characters, and even a few fine supporting actors (Manhattan's Bob Hoskins and Priscilla Lopez, Notice's Alicia Witt and Robert Klein). Both feature scenes in which the lead actress, playing "schlumpy," is eventually revealed - who woulda thunk it? - as a knockout. Both get incredibly maudlin after a relatively feisty opening hour. Neither is anything but a generically produced Star Package with precious few laughs. The only difference between the films? In Maid in Manhattan, Lopez works overtime trying to get Fiennes to match her ebullience - it never happens - and in Two Weeks Notice, Grant works overtime trying to get Bullock to match his talent for snappy, Hepburn-and-Tracy-esque badinage - it never happens. As such, neither film exhibits much in the way of romantic or comedic chemistry. Hmmm ... I guess even their one difference makes them the same. Your choice then.