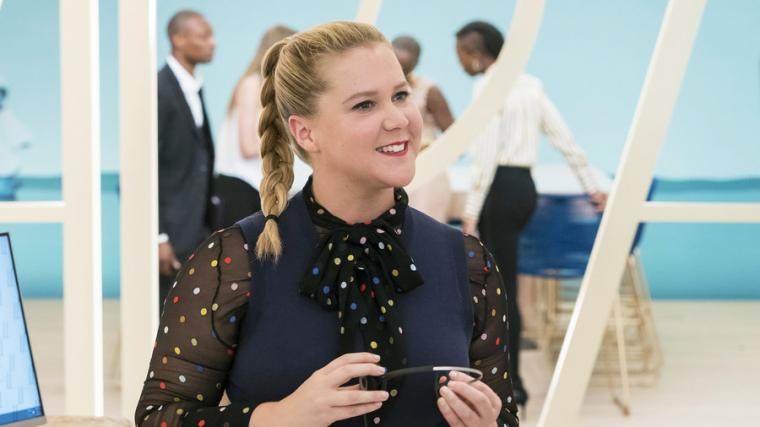 Amy Schumer in I Feel Pretty

Frequently amusing though it is, the you-go-girl comedy I Feel Pretty isn't great, but it does boast greatness in the fearless blond comedienne who makes the whole experience worthwhile. Hilarious and touching while refusing to deliver even one line in a predictable manner, this much-lauded performer, whenever she appears, turns what might've been a forgettable trifle into surprisingly resonant and satisfying entertainment. Her character also makes important points about self-image, biased expectations, and both blatant and hidden misogyny in offhanded and unexpected ways. I'm referring, of course, to Michelle Williams. But the movie's star isn't bad, either.

That would be Amy Schumer, and if you've seen I Feel Pretty's high-concept trailers, you may feel that you can now successfully predict every single beat in the movie itself. Whatever you're guessing will happen, in all likelihood, isn't far from what does happen. Schumer plays Renee Bennett, the Web-site manager for cosmetics company Lily LeClair, and a funny, friendly woman whose self-esteem issues stem, in part, from her employers housing her in a Chinatown basement rather than their fancy Manhattan digs. During a visit to the corporate office, Renee stares with envy and awe at the thin, radiant Lily LeClair staffers, and later that evening (having just watched Big), she runs to an outdoor fountain, tosses in a coin, and makes a wish for impossibly good looks. The next day, after a SoulCycle fall and a conk on the head knock her unconscious, Renee gets her wish. Or rather, she thinks she does, waking to believe that the plus-sized woman in the mirror actually has the face and physique of a supermodel. Newly brimming with confidence, Renee begins to act accordingly.

That plot synopsis runs far longer than 25 words. But I Feel Pretty's is a 25-word plot regardless, given that writer/directors Abby Kohn's and Marc Silverstein's script barely exists except as an excuse to put Amy Schumer in a bunch of situations that wouldn't play if performed by, say, Mila Kunis, or any number of more slender, conventionally beautiful comic talents. Watch Amy, in slow motion, strut and spin past agog bystanders! Watch Amy's unbridled id lead directly to a cushy new job and a sweet new beau! Watch Amy writhe with abandon in a wet-bikini contest! While there are plenty of gags in Kohn's and Silverstein's screenplay, there's really only one joke, and it's so endlessly repeated that I found myself yawning even during the routines I was enjoying. We get it, you feel like telling the filmmakers. Amy Schumer is doing things that women of her type traditionally don't. Couldn't one of them have been choosing to work with stronger material?

Schumer is clearly giving her all to the film's formulaic and borderline-insulting scenario, and the performer's natural wit, superb timing, and empathetic presence keep her from ever being embarrassing. But given that there's only one direction in which the movie can go – from slapstick farce to tearjerker once Renee realizes the truth behind her “magical” transformation – Schumer's invention is hobbled by the steady drone of narrative gears grinding into place: Renee losing and then regaining her BFFs (Aidy Bryant and Busy Phillips); Renee losing and then regaining her adoring boyfriend (Rory Scovel); Renee losing and then regaining the trust of her employers. (Her chief employer is played by an imperious Lauren Hutton, the former fashion model's casting as Lily LeClair herself both inevitable and absolutely spot-on.) Predictability isn't necessarily a deal-breaker in comedies. It can be, though, when what's being programmed isn't the story so much as our expected responses to it, and I Feel Pretty follows its slow-road-to-empowerment blueprint so slavishly that we're almost never allowed a truly spontaneous reaction to anything on-screen. Except, that is, whenever Michelle Williams is around.

With the possible exception of Tom Hopper, whose British accent keeps slipping through his American façade, there isn't a weak performer to be found in Kohn's and Silverstein's shared directorial debut: Bryant and Phillips are unfailingly winning, Scovel is a lovably low-key charmer, and there are delightful minor roles for Emily Ratajkowski and Adrian Martinez. But Williams, playing Lily's granddaughter and the company's division head Avery LeClair, is so spectacular that it's hard to imagine viewers not wishing she were the focus of the entire film – or at least a different, more endearingly bonkers film.

Speaking in a high-pitched, breathy sing-song that's like her My Week with Marilyn voice on helium, and with Avery's dazed expression suggesting a curious space alien enjoying her first amused exposure to humans, Williams is an utter original here, and so comically adept that she handily strolls off with every scene she's in. (Personally speaking, I got my money's worth from the film just by the way Avery says “Kohl's,” her unfamiliarity with the retail chain evident in her pronunciation “Ka-hools.”) Amazingly, though, Avery isn't set up to be a villain, and you slowly realize that Williams' character, and the performer's alternately hysterical and moving portrayal, are subtly emphasizing the idea that, like Renee, traditional knockout beauties can also be undervalued, marginalized, and discredited. While my issues with the movie are considerable, I had a not-bad time at I Feel Pretty. If the the next one is a Schumer/Williams buddy comedy, I'll gratefully line up for I Feel Pretty, Too. 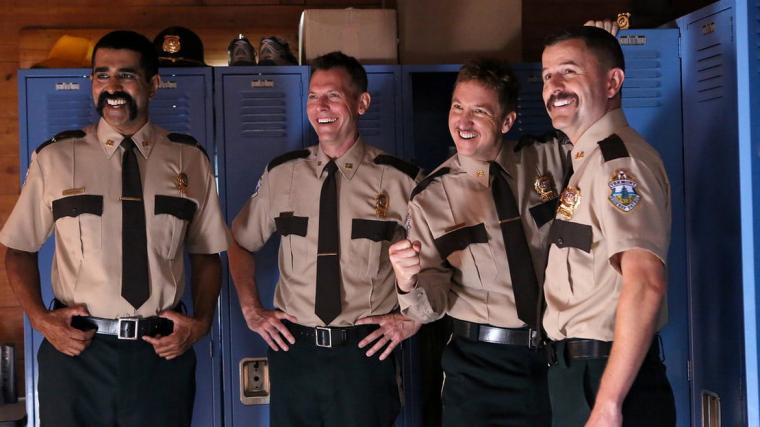 To anyone familiar with the Broken Lizard comedy troupe and its penchant for stoner jokes, the 4/20 release date for Super Troopers 2 was, in itself, a colossal stoner joke. Unfortunately, at least for this Broken Lizard newbie, it was also the smartest, funniest joke that director Jay Chandrasekhar's slapstick sequel had to offer. I'm going to keep this review short, partly because there's not much to say about the storyline that finds the Lizard guys (Chandrasekhar, Kevin Heffernan, Steve Lemme, Paul Soter, and Erik Stolhanske), in their roles as Vermont Highway Patrol officers, attempting to keep the peace and foil a smuggling operation in disputed Canadian territory. But as someone who hasn't seen 2001's Super Troopers, or Club Dread, or Beerfest, or any other Broken Lizard outing, there's also no reason you should trust my opinion on the purported hilarity of this crowd-funded outing, especially given that the movie appeared to make the other patrons at my Friday-afternoon screening deliriously happy. (I have to ask, though: Why was there no 4:20 p.m. screening at either area cineplex? Talk about a wasted opportunity.)

I will say that the Lizard quintet has undeniable comic rapport, even if their material here is less Wet Hot American Summer-funny than obnoxious in the style of Jim Varney's Ernest Goes to … flicks, and it's always fun to see Rob Lowe in grinning-douchebag mode, even if his Canadian accent sounded, to my ears, a little Irish. (Maybe that was the joke.) As to the rest, I'll merely concede that the ceaseless, repetitive gags involving Canadian dialects and questionable police conduct and Heffernan enduring Home Alone-esque torture seemed to tickle my nearly sold-out crowd beyond belief, and even I chuckled at the extended routine that questioned whether the Danny DeVito of Taxi was the same Danny DeVito of It's Always Sunny in Philadelphia. Oh yeah, and the magnificent character actor Brian Cox and the ever-wondrous Lynda Carter apparently like the guys, and vice versa. So while the Broken Lizard cabal may be tasteless, at least they have some taste. 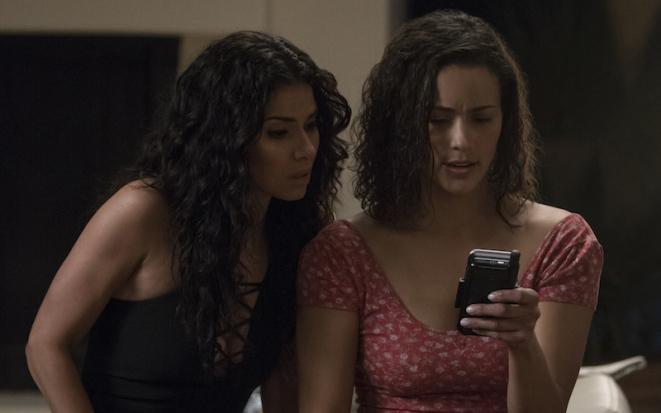 There are movies you love, and there are movies you hate. And then there are movies you want to throw, without remorse, through a plate-glass window. Welcome to my experience with writer/director Deon Taylor's Traffik, a hopelessly stupid, luridly reprehensible bloodbath made all the more repellant by its insistence, in the final minutes, that it was actually a hard-hitting exposé on the horrors of human trafficking.

This tale of a romantic-getaway weekend spoiled by bikers with a U-Haul full of kidnapped women opens with the ubiquitous title card “Inspired by True Events,” and that might be accurate if what the film is inspired by is the fact that people occasionally say and do things. But from the introduction of Paula Patton as some kind of fiercely principled journalist whose boss doesn't appreciate her impassioned commitment to the finale that would've been deemed too ridiculous for Taylor's wretched 2016 spoof Meet the Blacks, there isn't one moment of honest behavior, intent, or thought in the whole of the movie's 95 minutes. And while Taylor proves as thunderously inept with the thriller genre (and the written word) as he was in 2009's Chain Letter, we're forced into watching hillbilly yokels – to say nothing of Taylor's camera – slaver over the bare flesh and bloodied faces of Patton and Roselyn Sanchez and Dawn Olivieri in ways that make you want to shower while simultaneously signing writs of injustice and hurling your popcorn container at the screen. Add to this an offensively ill-used Omar Epps, a nonsensically written turncoat character for Laz Alonso, insulting roles for William Fichtner and Missi Pyle, interminable scenes of swimming-pool nookie, laughable soap-opera accusations, and the absolute worst employment of Nina Simone's “Strange Fruit” in the history of time, and Traffik belongs in a special rung of Hell even Dante couldn't have envisioned. At the film's merciful end, an on-screen statistic reveals that the human-trafficking industry earns profits of roughly $150 billion per year. A hundred-fifty billion, plus whatever it cost to buy a ticket.