Battle Boyale: “The War with Grandpa,” “Yellow Rose,” and “The Glorias” 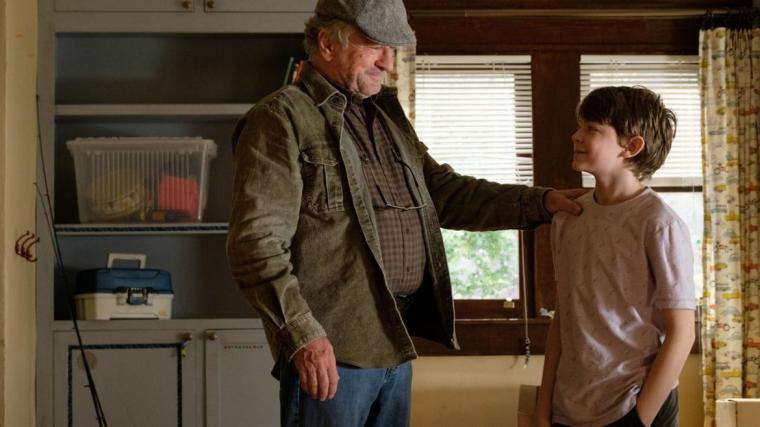 Robert De Niro and Oakes Fegley in The War with Grandpa

THE WAR WITH GRANDPA

About halfway through director Tim Hill's family comedy The War with Grandpa, it's late at night, and Robert De Niro's title figure – for reasons not worth getting into – accidentally slides off the roof. He prevents a crash-landing by hanging onto the rain gutter, and ends up dangling in front of the kitchen window in full view of his son-in-law. Grandpa's pajama bottoms then slide off. His son-in-law – who, for reasons really not worth getting into – consequently sees Gramps naked for the second time that day. He shrieks in disgust. Grandpa shrieks in embarrassment. My surprisingly well-populated auditorium, meanwhile, exploded in crackles. And even though Hill's staging of the scene was obvious, and the joke was crude and not all that funny, I was so happy to hear a movie crowd roaring with laughter again that I just about bawled.

I think I'm speaking literally when I say that, had The War with Grandpa been released in any other year, I'd probably have found it close to unbearable. A sentimental yet uncomfortably mean-spirited slapstick about the resulting property battle after De Niro's widowed senior is forced to move into his grandson's room and the tween is relocated to the attic, I would no doubt have found any number of things to complain about: the tired gags about failing older bodies and unformed young brains; the awkward shifts between cheeky humor and unearned melancholy; the spine-cracking Home Alone violence; the maudlin music cues; the waste of so many fine adult performers and a couple of promising tykes. (Whaddaya know: I guess I did find a number of things to complain about.) But this isn't any other year. And beyond being grateful simply for cineplexes – some of them, at least – staying open these days, I find myself inordinately appreciating the movie-going experience, which turns out to include the sound of other patrons, for 100 minutes, howling with delight at a dopey little comedy. While their face-masked laughter may have been slightly muffled, their joy was utterly infectious.

So no, I didn't laugh at this thing, and every time De Niro's septuagenarian landed on his back in ways that should've sent him to intensive care, I'm reasonably sure I audibly winced. I did, however, smile way more than I expected to. The star appears looser and more relaxed than he's been in other comic roles of late, and he develops an appropriately sweet and salty rapport with the grandson played by Oakes Fegley, a polished young performer with crackerjack timing. Uma Thurman, who can never be around often enough, manages to pull off both concerned-daughter emotionalism and one hell of a projectile spit take. Although their material is wanting, Rob Riggle, Cheech Marin, and Jane Seymour add welcome professionalism and seem reasonably glad to be there. And because his readings, by now, have become so deliberately, recognizably odd that the man scores giggles even before he talks, it's a massive treat just to watch Christopher Walken do his Christopher Walken thing, and an even bigger one whenever he and De Niro share the screen. Forty-two years ago, there's no way the actors could have predicted that their pairing in The Deer Hunter would eventually lead to this, but if The War with Grandpa is what it took to make a reunion happen, I'm almost blissfully glad this new movie exists. 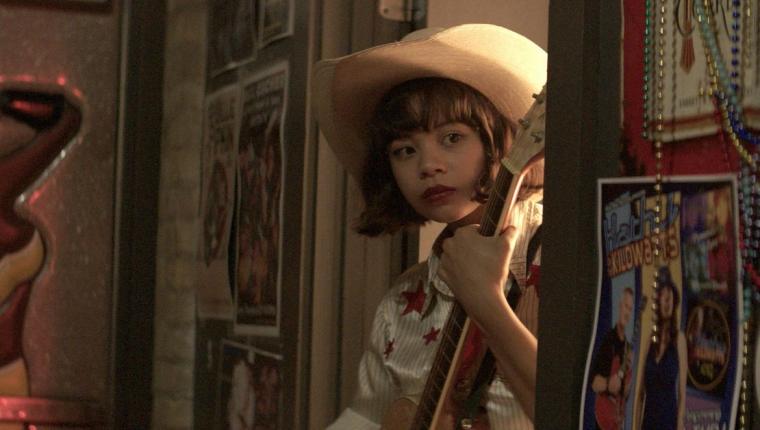 In terms of theme and execution, loads of films have proven themselves tone-deaf. Is it possible, though, for a picture to be tone-blind?

Director/co-writer Diane Paragas' indie drama Yellow Rose is, in many regards, a lovely piece of work, telling of a 17-year-old, undocumented Filipina (Eva Noblezada's Rose Garcia) who's planning on pursuing a country-music career in Texas when her mother (Princess Punzalan) is suddenly taken in by Immigration and Customs Enforcement. Rose is forced to flee to Austin, where she first lives with her estranged aunt (Lea Salonga), and then in the backroom of a honkytonk, and then in a trailer owned by country star Dale Watson, who has made the unfortunate decision to play himself. I say “unfortunate” not because Watson is all that bad in the movie, even though he's clearly not the trained actor that Noblezada is. I say it because from his first appearance here, with Watson offering Rose a queasy smile (and being satanically lit) next to a jukebox, this guy seems like a creep at best and a serial predator at worst, and while his behavior remains blessedly above board throughout the film, nothing about Watson's consequent presence or demeanor does much to change that initial impression. White-haired, unkempt, ruddy, chubby, clearly more than twice Rose's age, and with an omnipresent beer in his hand even at 10 in the morning – a character trait we're evidently meant to view as charming – this “Dale Watson” seems designed as a salt-of-the-earth mentor and father figure, He instead comes off as irredeemably icky. Was Paragas so grateful for the participation of a bona-fide country-music pro that she didn't notice the skeevy vibes Watson was putting out there?

Thankfully, and despite the narrative's rather formulaic nature, the rest of Yellow Rose is a lot less bothersome. Rose's and her mother's plights are, of course, timely and inherently affecting, and Noblezada and Punzalan enact their turmoil with occasionally wrenching heartbreak, particularly in scenes in which the elder Garcia begs her unwilling daughter to return with her to Manila. Cinematographer August Thurmer shoots downtown Austin at night in a vibrantly rich color palette, and Rose's original tunes (co-written by Paragas and Watson) are melodic and catchy; “Square Peg” is the soundtrack's chief earworm, but the climactic “I Ain't Going Down” is a peppy toe-tapper, even if it does feel directly air-lifted in from the Postcards from the Edge finale, albeit without Meryl Streep in tow. And while Paragas elicits fine, subtle portrayals from the non-Watson members of her cast, it's Noblezada who's Yellow Rose's chief takeaway. The young stage veteran, a gorgeous crooner, is astoundingly naturalistic in her big-screen debut, and she's incredibly touching in her brief scenes with Salonga, who won a Tony Award for playing Kim in Miss Saigon 26 years before Noblezada earned a Tony nomination for reprising the role in the Broadway revival. Someone should really get cracking on a full-length musical for the two of them. Preferably without Dale Watson in support. 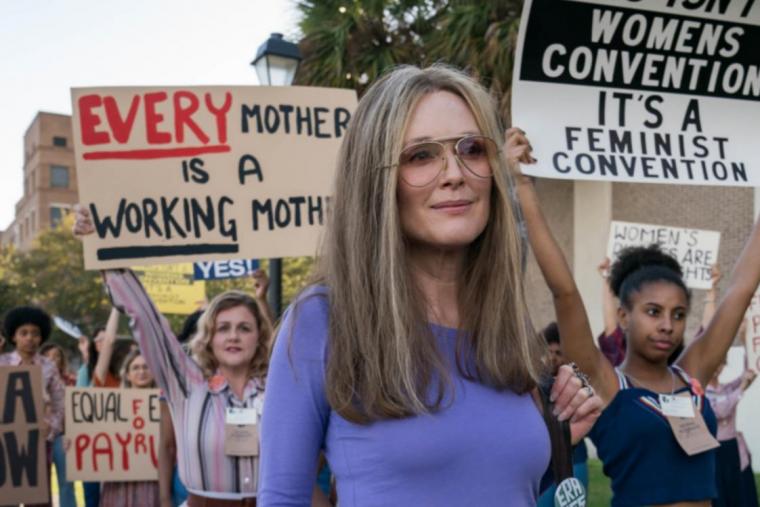 Given the right wig and glasses, is it conceivable that anyone could play feminist icon Gloria Steinem, and play her well? In this past spring's FX on Hulu miniseries Mrs. America, Rose Byrne took on the role, depicting a Steinem full of forthright levelheadedness and sneaky, self-effacing wit. In the summertime broadcast of Gloria: A Life on PBS' Great Performances, the Ms. magazine founder was enacted by Christine Lahti, and even though the script was banal, the performer, speaking directly to her audience, created a believable Steinem who emerged as a tireless political warrior and friendly chatterbox. (We were able to experience the genuine article when Steinem herself, to the crowd's understandable delight, popped on-stage after the curtain call and took questions for 20 minutes.) Now, in Prime Video's recent release The Glorias, no fewer than four actresses – Ryan Kiera Armstrong, Lulu Wilson, and Oscar winners Alicia Vikander and Julianne Moore – portray Steinem at different periods in her life, and all of them are first-rate. By this point, while I wouldn't necessarily want to see him in the part, I'm reasonably sure that even Morgan Freeman could don the woman's iconic hairdo and aviator specs and deliver a fairly strong approximation.

In truth, as someone who watched all nine episodes of Mrs. America (or had them on as background noise) several times over the past five months, I was feeling a little Steinem-ed out, and consequently didn't get around to The Glorias until a couple weeks into its streaming. Yet even if you already feel adequately up-to-speed on Steinem's life and times, director/co-writer Julie Taymor's adaptation of the 2015 memoir My Life on the Road is well-worth watching. With playwright Sarah Ruhl serving as Taymor's co-screenwriter, the script doesn't shy from hagiography, and the dialogue is certainly more prosaic than it usually is in these authors' works. But we're given marvelous insight into young Gloria's challenging upbringing with her lovable, frequently absent father (Timothy Hutton) and emotionally fragile mother (Enid Graham), as well as thorough, fascinating detail during Steinem's trip to India, her years spent on Ms., and her later labors on Native American issues. Unsurprisingly, the film's most gripping segments involve Steinem's rising political activism, which allow Vikander and Moore to share scenes with the likes of Janelle Monáe's Dorothy Pitman Hughes, Lorraine Toussaint's Flo Kennedy, and Bette Midler's Bella Abzug. The film's dovetailing chronology, though, makes nearly all of The Glorias' sequences equally arresting, as does Taymor's traditionally wondrous playfulness behind the camera, her frequent excursions into the surreal including the device of having all four Glorias talk amongst themselves during a black-and-white-dream-world bus ride to the 2017 Women's March on Washington. There's another passenger with them on that figurative trek, and guess who it is. Turns out even Gloria Steinem can play Gloria Steinem beautifully.