JC is in the house – by which I mean Quad City Music Guild's really modern-day Jesus Christ Superstar, a production complete with skinny jeans, loafers, and cell phones. Friday's opening-night performance of this classic with music by Andrew Lloyd Webber and lyrics by Tim Rice was still working out its bugs; there were missed microphone cues in which you couldn't hear the beginnings of songs, and personally speaking, I was a bit confused by Heather Blair's costume design, as it appeared that every actor just went into their closets and picked out something peculiar to wear. But straight out of the gate, Adam Sanders' Judas Iscariot, at least, was powerful in his rendition of “Heaven on Their Minds.”

Overall, for me, director Michael Turczynski’s production lacked expressive impact, Hillary Erb's choreography felt very basic and a bit stiff (dancers seemed to be merely going through the motions, if precisely), and the majority of the characters, aside from Sanders' and a few others', were emotionally disconnected. I was also underwhelmed with Chase Austin in his role as Jesus of Nazareth. Although he really did look the part, at many times I felt like he was doing more screaming then actual singing, and he had a kind of strange way of going into his falsetto voice rather abruptly.

Adam Beck, however, showed off his deep (very deep) bass voice that was incredible and made his role as Caiaphas believable and dark, and as his evil sidekick Annas, Marissa Elliott had fantastic stage presence and stayed in character with a creepy foreboding about her. Together, Beck and Elliott made quite a good pair, and on the lighter side of things, Emily Majetic was pleasant as Mary Magdalene – but again, she appeared disconnected from any genuine emotion. 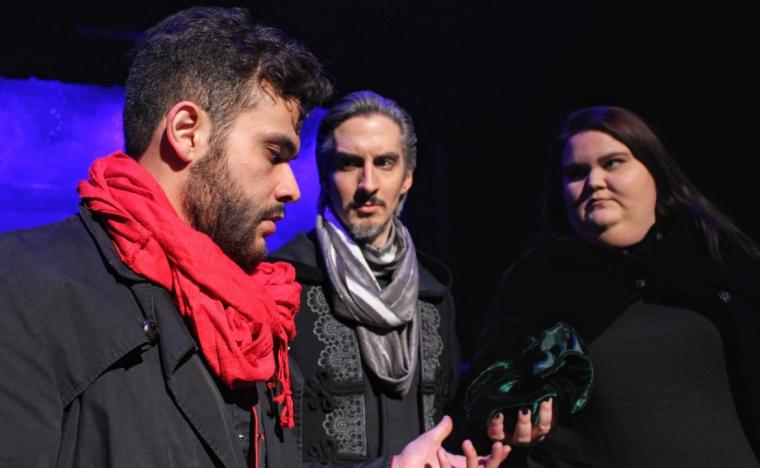 Phil Tunnicliff's set design consisted of a small wooden staircase that had been spray-painted graffiti-style with a banner that had “Jesus” written across it, while Nicole Blodig's lighting was effective in its glowing pink, purple, and orange hues that added visual impact from scene to scene. The employment of a spotlight on Friday, though, was distracting, as it didn't seem to be able to stay on one particular area of the actor, consistently shining a little bit ahead of its purpose or just slightly off the performer.

Yet Sanders carried this Jesus Christ Superstar, and as usual, poured out his soul on stage. Dressed in a black trench coat, black country-style shirt, and red scarf that he later used to tightly wrap around his neck during the ensemble performance of “Damned for All Time/Blood Money,” Sanders definitely knew how to connect with the audience and bring raw emotion to each scene he was in. Meanwhile, Keenen Wilson's Pontius Pilate just didn’t work for me, as the actor came across as too likeable, with not nearly enough anger or disdain toward Jesus. It didn’t help matters that Pilate’s costume looked more like the wardrobe for a blues singer – complete with fancy hat and straight tie – than a ruler who ultimately holds the fate of Jesus in his hand. 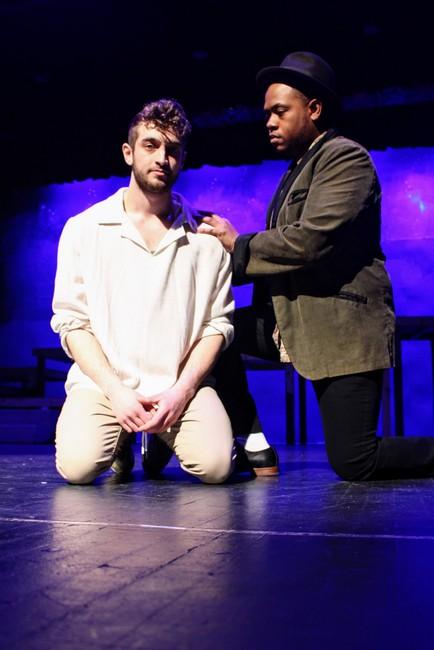 With all that being said, there were moments in Turczynski’s presentation that really did work for me, such as the scene in which Jesus endured 39 lashes on his back. The sequence found Jesus secured in the center of the stage with ropes that descended from above wrapped around each arm, but instead of the Roman soldiers delivering this cruel punishment, each individual cast member ran up and angrily grabbed the ropes from each side, slinging them around as each lash was counted aloud. This was one of the few times, though, that I felt like the cast really got into the raw power of a scene.

It was very difficult for me not to compare this production of Jesus Christ Super Star to others I have seen, and I really wanted to love Music Guild’s rendition of this energetic musical. Unfortunately, though, it left me disappointed. Don’t get me wrong: The show had its moments. But for me they were few and far between, and I think this particular musical requires well-trained and seasoned dancers, as well as a tremendous amount of concentration to remember the gravity of the narrative – and what it takes to effectively deliver a truly stimulating experience that touches the heart and inspires the soul.

Jesus Christ Superstar runs at the Prospect Park Auditorium (1584 34th Avenue, Moline) through March 31, and more information and tickets are available by calling (309)762-6610 or visiting QCMusicGuild.com.