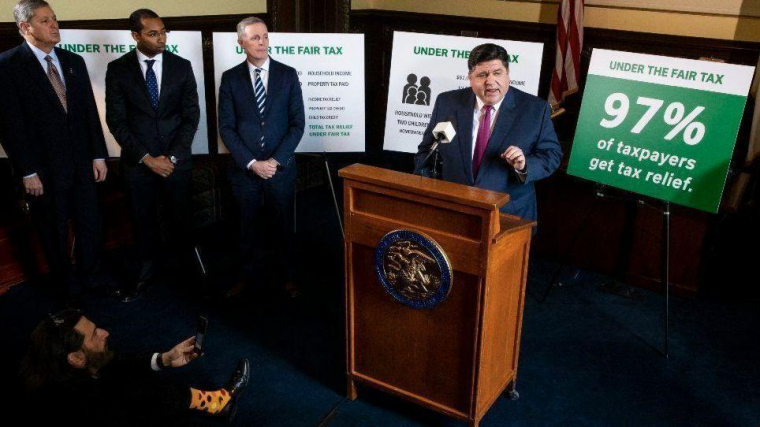 Illinois Democrats were hoping for some big election-night wins last week, but now everything has devolved into finger-pointing chaos.

Governor JB Pritzker’s graduated-income tax proposal was in some doubt for a while. The governor’s campaign chose not to advertise early because of the delicacies of politics during a pandemic, so they passed up a chance at total dominance of the playing field during crucial months.

When billionaire Ken Griffin finally decided to weigh in against it, the proponents had lost the crucial advantage of time to drive their message home unfettered. And the “anti” message was strong and relatable: Don’t trust Illinois politicians to do the right thing. The proponents’ much-less-focused message simply had no chance.

The ballot measure was losing as of November 6 by almost ten percentage points and about 500,000 votes.

A narrow loss would’ve been one thing. But after voters overwhelmingly rejected taxing a relatively few upper-income people, it’s going to be hugely difficult to convince Democratic state legislators to make up for those billions in lost revenues by increasing the state’s flat tax on everyone.

Without the money generated by a graduated income tax, Governor Pritzker’s fallback was the hope that Joe Biden would win the White House and the Democrats would take control of the US Senate and give big bucks to the states. As I write this, Democratic control of the Senate appears in doubt.

So, if Pritzker can’t raise taxes and he can’t get a federal bailout, that leaves a $5 billion Federal Reserve loan, and the only way to make room for those payments will be to slash an already-bare-bones budget to the marrow or consider shafting the public employee unions and “reform” pensions.

Pritzker is most definitely not in a good place. He put literally everything on this tax vote and he came up way short.

A big loss like that can easily devastate legislative confidence in a governor. As I’ve said for years, this business is a protection racket. You earn support by proving you can protect your fellow politicians’ interests. Despite Pritzker’s billions, his big win two years ago over an incumbent governor and broad public support for his handling of the pandemic, he did not hold up his end on this one.

That brings us to soon-to-be-former Illinois Supreme Court Justice Tom Kilbride, who conceded defeat in his retention bid. The opposition’s message, also mainly funded by Ken Griffin, was brisk and simple: A vote against Justice Kilbride is a vote against Madigan.

We’re to the point where I don’t even have to explain that “Madigan” means House Speaker Michael Madigan. Everybody knows who he is and most despise him, so the attack worked like a charm in that downstate, blue-collar district.

Like Pritzker, Kilbride did not have an effective counter-argument. Kilbride fell way short of the votes he needed to be retained.

And while the Griffin-funded effort to defeat the Fair Tax didn’t mention Speaker Madigan in their TV spots, they did use Madigan in direct mail, and people generally hate Madigan so much that it’s probably not a huge leap to say he’s why the “Don’t trust ‘em” approach worked so well.

In disgust, the governor and US Senators Durbin and Tammy Duckworth all threw Madigan under the bus after the election ended, calling on him to quit the chairmanship of the state Democratic Party. Senator Duckworth even suggested he should no longer be House Speaker.

But if you zoom out for a moment, you’ll see that congressional Democrats failed to meet expectations all over the country last week and a massive national push to elect more Democratic state legislators crashed and burned.

On election night, Madigan appeared to have lost two House seats to the Republicans when expectations were that he’d pick up several, but that might change for the better when all the votes are finally counted.

The bottom line is the “Madigan” message appears to have worked and it’s probably only going to get worse for the Democrats if he remains in power.

But that doesn’t let the governor, Senator Durbin, and Kilbride off the hook. And a much-better-than-expected performance by President Donald Trump in Illinois, combined with a national trend that defied expectations, were also involved.

In other words, simple explanations are usually neither.