The Smith-Mundt Modernization Act of 2012 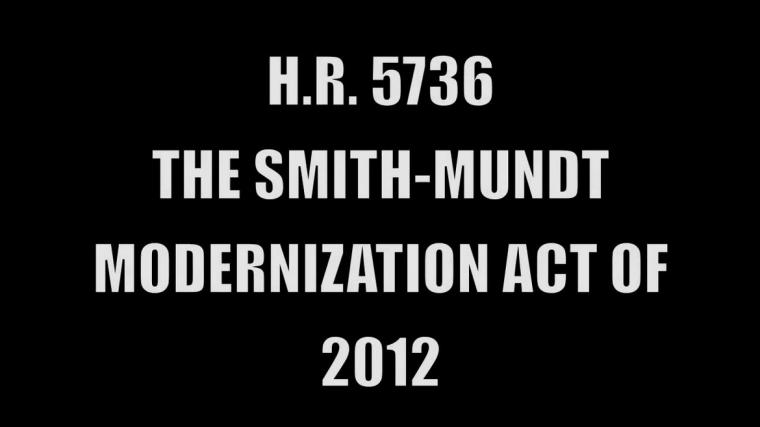 There is a high probability that you have never heard of the Smith-Mundt Act of 1948 (SMA). Which would comport with not knowing (or caring) about the Smith-Mundt Modernization Act of 2012 (SMMA). Both these laws are critically important and impact your lives directly, so time to get up to speed.

The Smith-Mundt Modernization Act (SMMA) was buried in the 2012 National Defense Authorization Act for good reason – because it repealed the 1948 Smith-Mundt Act. The Smith-Mundt Act is also known as the U.S. Information and Education Act, which authorized the State Department to engage in propagandizing foreign countries as a form of public diplomacy.

The SMA established that via the Broadcasting Board of Governors (BBG), Voice of America (VOA), and Radio Free Europe (RFE), the U.S. State Department and Office of Public Affairs were authorized to disseminate propaganda to foreign publics, but were strictly prohibited from releasing that same propaganda in America for public consumption. Put simply, our government was permitted to lie to people in other countries, but not to us here at home.

This prohibition was lifted in 2012, when the SMMA was signed into law by President Obama, allowing the same propaganda disseminated by our government to foreign publics, to now be released in the U.S. for the very first time.

And yes, our government is also now allowed to create propaganda tailored specifically for U.S. public consumption, using any media as it sees fit, while remaining anonymous as the source of the material being reported.

This covert activity by our government's state department (Public Diplomacy) and Public Affairs department can only occur with corporate media's full complicity, for which it is well compensated, thanks to the tax dollars appropriated by the SMMA. It means that when our own government's propaganda is presented to we the American people as news, we are none the wiser that it is scripted, orchestrated, and fully supported with the invisible USBS (United States BullS---) seal of approval.

The SMMA provides for ample funding for U.S. propaganda programming, incentivizing the corporate-media cartel to partner with the BBG for a new source of revenue to backstop its operational budgets that have been declining due to years of increasingly low ratings, social media competition, loss of relevance, and the public's growing loss of confidence in media's reporting veracity regardless of political affiliation.

The SMMA promotes unholy alliances between the U.S. State Department and America's corporate media that unbinds reporters and news departments from the solemn responsibility to verify information.

Traditional “news,” based on reliable, verifiable fact-based evidence is slowly giving way to “newz” – an ersatz form of information dissemination via broadcasting and/or publishing that enjoys specialized immunity for libel, misinformation, false or fraudulent information, misrepresentation, and anything else previously prohibited by the SMA. If serving a national security purpose(s), the media cartel has a government-sanctioned license to lie.

This certainly explains a lot of newz masquerading as legitimate news these days. Revoking the restrictions once enforced under Smith-Mundt has opened the floodgates on active, former, and retired federal government defense, military, and intelligence agency personnel, hiring on as experts by broadcast and cable news networks, in an attempt to bring gravitas to what amounts to no more than a continuum of guided speculation.

Congress expressed concerns over corrupted information by media while considering the SMMA, but instead of inserting protections, it left the legislation wide open for interpretation.

Consumers of news can't deny the departure from traditional fact-based news as of 2012. What else explains the growing amount of grossly unsubstantiated and/or blatantly biased reporting, the unprecedented anonymous or hearsay sourcing, or the glaringly irresponsible lack of citing sources at all? Just two decades ago, such unprofessionalism in journalism would have been a career breaker, and rendered complicit news organizations moot.

Generally speaking, however, there remains a stubborn residual belief among Americans that media would never be permitted to knowingly deceive people. There are laws against such abhorrent conduct, aren't there? Media broadcasters would lose their broadcasting licenses, and publishers would lose their standing as providers of news that is reliable or trustworthy. More importantly, our government is forbidden to propagandize Americans using deception, especially via a free press, right?

Grasping the importance of the SMMA in undermining America's free press, its impact on our governance, culture, and socioeconomic structure as a free society, cannot be understated. Not only is the Fourth Estate utterly compromised relative to the information it does convey, but there is a far greater mission of corruption in the massive amount of need-to-know information it does not convey. Systematically omitting relevant information from the public forum, tailoring narratives and messaging in the guise of legitimate news, redundant scripting across networks, and disallowing nearly all critical debate or analysis, is classic communications manipulation, strategically designed as part of a larger behavior modification agenda.

This is hardly new.

Sophisticated behavior-science methodologies has been in play through media for decades. When you react with far more emotion than reason to news items, without stopping to question any part of that item, you've been successfully triggered into a highly specific, predetermined response – a conditioned response.

Triggering itself is a primary means of conditioning, with lots of proven behavior science to inform it. So now its your turn to inform yourself so that you can identify the oft-applied behavior modification techniques being deployed constantly throughout media genres, including social media – such as short, fast-paced segments, redundancy/repetition, subliminal suggestion, cognitive dissonance, projection, nudging – the formidable list of conditioning techniques is worth knowing if you hope to avoid or overcome these traps. Only then will you advance onto recognizing propagandized newz so that you can resolutely reject it. Otherwise drone on.

In tandem with the repeal of the 1948 Smith-Mundt Act via the 2012 Smith-Mundt Modernization Act, the Bureau of Global Public Affairs (BGPA) announced its recent rollout during a C-SPAN-covered event on September 4, 2019.

The attendees, including a representative from Voice of America, and C-SPAN viewers learned that the Bureau of Global Public Affairs is a consolidation of Public Affairs and Public Diplomacy within the State Department.

The Assistant Secretary of State and Undersecretary for Public Diplomacy & Public Affairs, Michelle Giuda, presented on the merger, claiming it will work closely with its media partners as it ramps up its mission to “better communicate,” assuring the audience that it is “perfectly aligned with Smith-Mundt.” However, Giuda neglected to mention that Smith-Mundt as originally legislated, is no longer strictly applicable.

This new Bureau of Global Public Affairs is no small matter and its significance will only grow as propagandized newz proliferates and becomes the norm. It is the largest reorganization of the State Department in 20 years, according to Sim Farar, Chairman of the U.S. Advisory Commission on Public Diplomacy (USACPD). His Commission is tasked with submitting an annual comprehensive report that reviews over 20 state departments' and other government agencies' activities in international public diplomacy, including the broadcasting activities of the Broadcasting Board of Governors, and offers recommendations. Of the 122 recommendations since 2013, 55 percent have been implemented. One of those recommendations was the recent merger of the State Department's Public Affairs with the U.S. Agency for Global Media (Public Diplomacy).

It is imperative for you to learn and share information on this new Bureau of Global Public Affairs because its activities include you, too. Follow it where you can, pay attention, and start connecting these very serious dots. This Bureau impacts many areas when it comes to public relations on behalf of government. This is a new agency so a commitment to public vigilance is necessary, and information gathering will require extra discernment. For example, searching Govtrack found no results for “Bureau of Global Public Affairs” to date, likely because it is so new.

It is also useful to familiarize yourself with the actual players involved. We tend to think of government departments, committees, and bureaus as faceless, nameless people. This new Bureau's people have faces, names, relevant applicable histories, and are knowable – so get to know them. They are public servants, which is supposed to be a good thing. Either way, you pay them, so by all means check their work.

[Note: Human-trafficking reporting is under the purview of the Secretary of State Public Diplomacy]