The Raids on State Senator Martin Sandoval’s Offices and Home Prove That Justice Ain’t Beanbag, Either 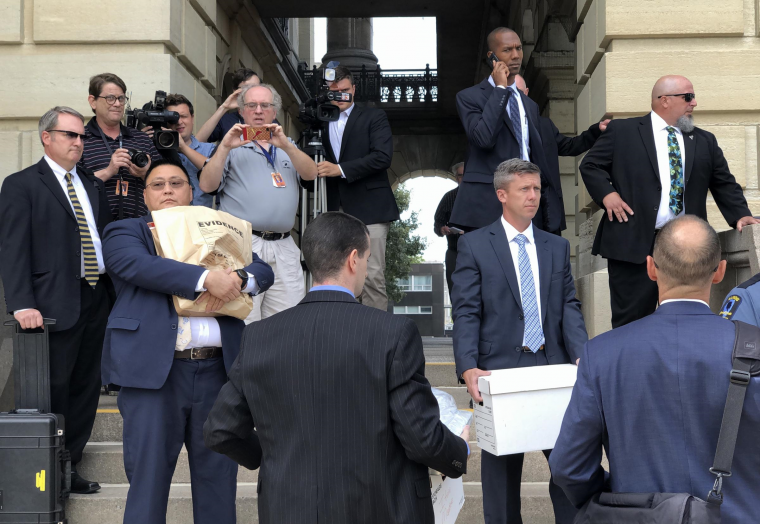 At about the same time last week, Chicago-based investigators with the FBI and the IRS swooped into Democratic State Senator Marty Sandoval's district office, Statehouse office, and home residence, removing boxes of documents and seizing computers.

So, yeah, this is definitely serious stuff. Imagine the evidence the feds had to provide to the Justice Department headquarters and to a federal judge in order to pursue and then obtain a sweeping warrant like that one. You don't get permission to do all that for a simple fishing expedition, or because the target's kid got a job or merely to convince the dude to flip on somebody else.

The Tribune reported that Senator Sandoval may have steered business to "at least one company in exchange for kickbacks." The coordinated federal raids didn't exactly surprise many Statehouse types. One lobbyist said he was with seven colleagues the day of the raid and they all claimed to have an unsavory Marty Sandoval story. Another was with 17 colleagues and all but two had a story about Senator Sandoval, um, "asking" them for various things in exchange for helping them with their legislative agendas.

Officials with the Senate Democrats and the Illinois Secretary of State said that they did not have copies of federal warrants, which would be helpful to figure out what the feds were after. That's somewhat surprising because the Secretary of State controls the Statehouse and the Senate Democrats control their own office suites. Senators themselves do not technically control their offices. The federal agents reportedly showed their warrant to the SoS police when they arrived at the north entrance and then presented it to an employee near or in Sandoval's unlocked, open office, but no copy was apparently kept.

Nobody knows whether the raids were an outgrowth of current investigations or whether somebody flipped on him or if an irate civilian lodged a complaint. Alderman Burke, for example, got in trouble partly because he allegedly tried to shake down a regular guy who took umbrage.

Senator Sandoval is not only the Senate Transportation Committee Chairman, but he is also a member of leadership as the Majority Caucus Whip.

Senate President John Cullerton has refused to remove Senator Sandoval from either of the two positions. He's even said nobody is sure whether the feds are really after Senator Sandoval (which is kind of preposterous because, while the feds can definitely display a mean streak, they're not gonna raid an elected official's offices and home because they're going after another person).

Senator Sandoval hasn't been charged with anything yet and we don't even know what the feds were really after here. They've since raided or visited three small towns in Senator Sandoval's district.

But Cullerton's stance is not going over well with several members of his caucus. Cullerton has elected as many suburban PTA types as he could over the years, and those folks tend to be squeaky-clean people who ran for office to do squeaky-clean things. They most definitely did not come to Springfield to defend this kind of stuff.

Sandoval has been on the outs with House Speaker Michael Madigan and his team for years. The feud reached a fever pitch last year when Madigan sided with Representative Chuy Garcia's organization and successfully backed Cook County Commissioner Alma Anaya against Sandoval's daughter Angie for Garcia's Cook County Board seat.

Sandoval prepared for that impending battle partly by raising lots of money and launching a massive play for publicity.

Among other things, Sandoval placed himself at the center of this spring's effort to pass an infrastructure bill, holding high-profile hearings around the state and making impossible-to-ignore comments to locals about how they needed to get behind specific tax-hikes if they wanted their project money. He's reported raising $263K in campaign contributions since July 1. But a recent fundraiser got him more publicity than he bargained for when a photo was posted online of an attendee "shooting" a tequila "gun" at a person dressed as President Trump.

And now he's the one under the gun.