Now the Shoe's on Michael Madigan's Own Foot 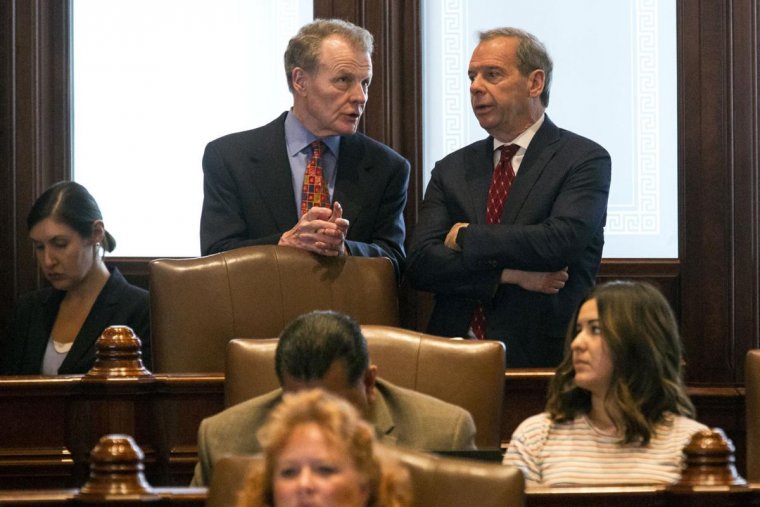 A couple of days after the July 17 disclosures in ComEd's deferred-prosecution agreement with the US Attorney's office, Illinois House Speaker Michael Madigan called individual House Democrats to try and reassure them that all would be well.

According to multiple legislators, the House Speaker told his members that he had done nothing wrong and that he never did things like recommend unqualified people for jobs, and fully expected that, if they were hired, they would actually show up for work.

One object, I was told, was to prevent more House Democrats from releasing "if true, Madigan must resign" statements.

The gambit failed. By the day he had called, four House Democrats had already said he should resign if the allegations were true. Another, Representative Anne Stava-Murray (D-Naperville) went even further, saying Madigan ought to resign without an "if-true" qualifier.

And then, not long after the calls, two more H-Dems released "if-true" statements, followed that evening with an "if-true" demand from 12 members of the House Progressive Caucus, eight of whom had not already issued similar statements.

That makes 15. And 74 House Democrats minus 15 equals 59, which is one shy of being re-elected speaker in January. But it's unclear what will happen that far down the road.

Just two House-Democratic men have spoken up. As with the 2018 sexual-harassment crisis in his chamber, Madigan once again faces serious problems with women legislators.

Madigan also informed his members that, while he was fully cooperating with the feds, he would be fighting these claims because there was no quid pro quo. But fending off the full force and might of a federal prosecutor who appears more hell-bent on prosecuting the Speaker than any of his predecessors will not be easy or cheap.

The Friends of Michael J Madigan campaign committee began earnestly spending money on legal fees in late July of 2017 and has reported spending $2.66 million on lawyers since then. Some of that was spent on investigations he ordered conducted into his own political operation regarding sexual-harassment issues, but not all.

Madigan's $2.66 million is more than one out of every five dollars (21 percent) expended on legal/attorney/lawyer fees since late July of 2017 by all state and local candidate and political committee in Illinois combined. Whew.

So, I asked a Madigan campaign spokesperson if he would pledge to spend all the funds he raises for the rest of this campaign cycle on campaigns and not on legal fees.

"Not going to have a comment," the spokesperson e-mailed me back.

Madigan's most vital job is electing and re-electing House Democrats, many of them suburban women. And that costs lots of money. But so does a vigorous legal defense.

Madigan was super-quick to oust others during the 2018 sexual-harassment crisis. For example, Madigan immediately stripped Deputy Majority Leader Lou Lang of his leadership position and his chairmanships after wild and ultimately-disproved allegations were leveled against him, including a preposterous claim that Lang was involved with a $170-million "bribery" scheme.

Madigan's actions appeared prudent at the time to many. But now the shoe is on his own foot.

As with the 2018 sexual harassment scandal, there is no doubt that Madigan created this current climate, either by design or by default.

How else can you explain the willingness of ComEd to allegedly hand over a vacant corporate-board seat to the man? Why else would ComEd pay millions of dollars to a "consultant" so he could allegedly use that money to put Madigan's captains (and others) on the payroll who did little to no work? The company's internship program apparently had a direct pipeline from the 13th Ward, for crying out loud.

These things don't just happen out of thin air. You don't throw one precious goodie after another at somebody unless you believe it works. And, hey, give Madigan the benefit of the doubt: Maybe one thing didn't specifically lead to another. But you cannot disagree that Madigan allowed that impression to persist.

Madigan ultimately had to admit in 2018 that he'd fostered a hostile climate for women. To his credit, he made things better.

Madigan also created a climate that allowed these ComEd favors to happen, whether he specifically ordered those favors or not. As before, perhaps, he didn't want to know as long as everything got done.

And, as before, he should admit to this and disavow the practice and change the way things are done or he should seriously consider retirement. It's time to fully bring Illinois into the 21st Century.