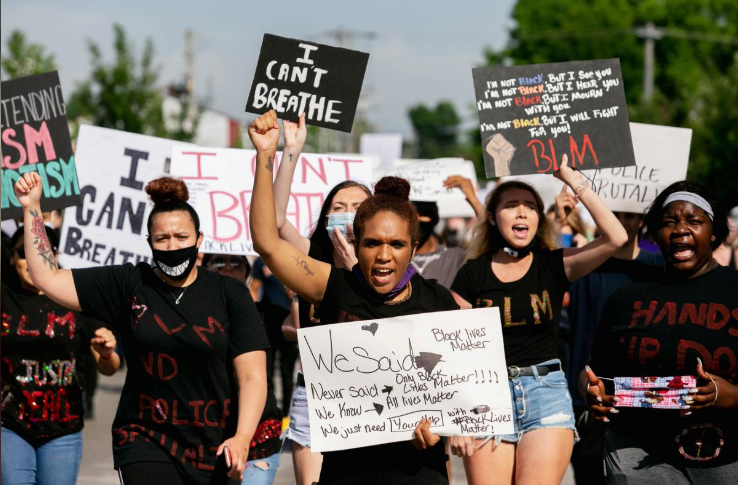 Organizers of a Black Lives Matter protest in Anna, Illinois, figured 10 people might show up for their event on June 4. The organizers endured threats of violence for days leading up to the rally.

Hey, this is Anna we're talking about here. Excuse my bluntness, but they don't call Anna "Ain't No N------ Allowed" for nothing. Anyone who knows even a tiny bit about southern Illinois and race history knows that Anna is Illinois' most infamous "sundown town." To this day, some residents still wear that moniker as a badge of honor.

According to The Southern Illinoisan newspaper, however, nearly 200 people turned out for the hours-long event.

Let that sink in for a moment. Almost two hundred people marching and rallying peacefully under a Black Lives Matter banner in Anna, of all places. If you had told me that would happen a few weeks ago, I would've told you to go sleep it off.

Also, according to The Southern, the only people removed from the rally by police were white counter-demonstrators.

You could've knocked me over with a feather when I read that.

Hundreds of people also turned out for a Black Lives Matter march in Taylorville the same day. Taylorville, due east of Springfield, is in Christian County, which is 97-percent white. Its county sheriff opposed legalizing cannabis last year because doing so, he said, would be an invitation to violent Mexican drug cartels to set up local pot grow-houses. I kid you not.

But that very same sheriff marched with the BLM protesters. "I want the public to know that our police officers are just sickened by what happened in Minnesota," Sheriff Bruce Kettelkamp said about George Floyd's murder.

Now, maybe if protesters go back for a second round, things could turn out different. Buffalo, New York police leaders publicly knelt with BLM protesters last Wednesday. The next day, two Buffalo officers knocked a 75-year-old white protester flat on his back during a rally and then walked away, leaving him bleeding in the street.

Either way, as I've been saying since the protests and the violence started: We don't have to agree on everything, but we absolutely must listen right now to the people who are subjected to racism at the hands of their own governments and then figure out where we want to go.

"As an African-American male who has had my own negative experiences with law enforcement, I'm angry," wrote Illinois Attorney General Kwame Raoul to his employees last week.

There was a time in this country when people generally acknowledged that societal problems existed and then they proposed solutions. We didn't always agree about how to get there, but we mostly agreed that a problem had to somehow be solved.

And make no mistake, this is a huge problem. After listening carefully and thoughtfully, we need buy-in from all good people, and then we need them to come to the table with their ideas. I'm not spouting some pie-in-the-sky optimism here, by the way. This is actually how a democratic republic is supposed to work.

Illinois Senate Majority Leader Kimberly Lightford told me last week that some of her fellow African-American legislators were contemplating a listening tour "to hear the voice of young people."

"We may or may not immediately reveal a plan or proposal," said Lightford, who until recently chaired the Illinois Legislative Black Caucus. "It's far too important to not jump the gun and get this one right."

No African-American state Senators appear to be currently pushing for an immediate special legislative session. Three freshman House Black Caucus members from Chicago (Kam Buckner, Curtis Tarver, and Lamont Robinson) came out in support of a special session last Wednesday to address "community police relations, law-enforcement accountability, and economic development." But none of their colleagues have announced support since then.

And though the governor said he'd go along with a special session if the two Democratic legislative leaders supported it, he also said legislators needed to work out a plan before they return. Neither leader has yet voiced support for a special session, and as I write this there is no plan.