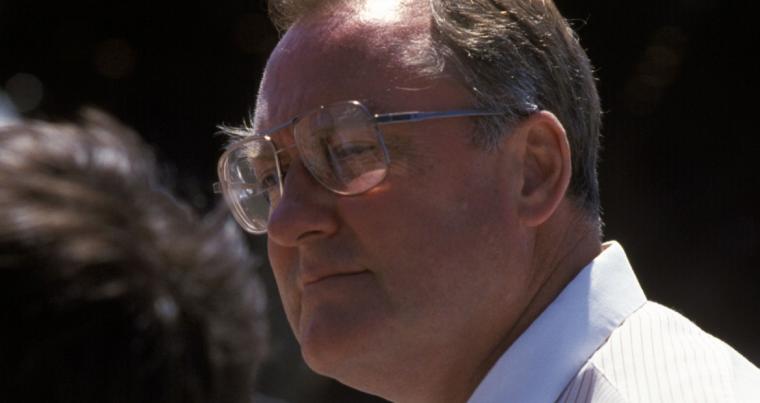 The late Jim Thompson was just 40 years old when he was first elected governor of Illinois in 1976. Rod Blagojevich was called a youthful politician, but he was 45 on the day he was elected governor. Jim Edgar was 44 in November of 1990.

After serving 14 years as governor, longer than anyone else in Illinois history, Thompson was still just 54 years old the day he left office.

Thompson could've coasted on his reputation and lived a charmed life as a law-firm rainmaker. Instead, he became chairman of Winston and Strawn and transformed it into the international legal powerhouse it is today.

Along the way, he served on the 9/11 Commission, chaired the Illinois Sports Facilities Authority, did a little lobbying, and argued numerous cases before the Illinois Supreme Court.

But his time as governor is what he'll justifiably be most remembered for. He truly dominated Illinois, and the man was one of the best natural-born campaigners I've ever seen.

Thompson had the innate ability to wrap a blistering attack in a humorous coating. For instance, his 1982 opponent Adlai Stevenson III once complained that Thompson was treating him like "some kind of wimp."

"I have never called Adlai Stevenson a wimp," Thompson said to knowing laughter. "I don't think he's a wimp, whatever wimp means. Sun-Times called him a wimp, but I didn't call him a wimp."

Thompson just barely won that race, even though the state was in the depths of the "Reagan recession." Stevenson came back four years later, but Thompson had already adopted most of Stevenson's best ideas from 1982, and Stevenson was obliterated after followers of Lyndon LaRouche created havoc by winning two statewide Democratic primaries. Like Barack Obama after him, Thompson's opponents seemed to fall away on their own, but it was never that easy.

Thompson was a strong partisan on the campaign trail and with his innumerable patronage hires. He once said if two people were equally qualified to be a janitor, then he'd naturally prefer that a Republican was hired.

But he was a bipartisan dealmaker par excellence when it came to the General Assembly. Thompson and House Speaker Michael Madigan cooked up countless deals, with the new ballpark for the White Sox being the best-known. When Senate President Phil Rock was having trouble with Madigan, Thompson would straighten things out. When Senate Minority Leader Pate Philip wouldn't take his calls, he physically barreled past Philip's chief of staff and marched into the Leader's office and cleared the air. The man knew how to handle people and he knew how to pass a bill. And when he decided that he wanted to be endorsed by both the AFL-CIO and the Illinois Chamber in his final reelection bid, he made it happen.

Governor Richard Ogilvie helped move Illinois into modern times with a state income tax, but Thompson accelerated the process with his massive state building and construction programs. He traveled the world to attract businesses and was instrumental in opening a new automobile assembly plant in McLean County. He fathered the state's nuclear-energy program, which is still a cornerstone of our economy.

Along the way, he mentored countless people and helped even more with their careers. After convicting former Governor Otto Kerner as US Attorney, Thompson argued strenuously for his early prison release on health grounds. He was, in a word, a mensch.

All that being said, some of Thompson's actions created a burdensome legacy for Illinois. Back in the 1970s, state retirees who'd worked for decades were stuck with tiny pensions that couldn't possibly keep up with rampant inflation. Thompson eventually pushed through a compounded annual cost-of-living pension-increase that has since driven the state's finances into a deep pit because the benefit increases were never properly funded.

And during his years in office, the state budget did not nearly keep pace with the need for more money for K-12 schools, a habit that has continued to this day and has caused huge property tax-hikes.

I do not think he knew how much the pension change would cost; and just about every politician loves pandering to the elderly. And Illinois still had fairly reasonable property taxes at the time.

Whatever. I could never hold a grudge against that man. I respected him, warts and all. Rest in peace, Big Jim.