If the Herd Gets Spooked by a Rat in Its Midst, What Does That Say About the Herd? 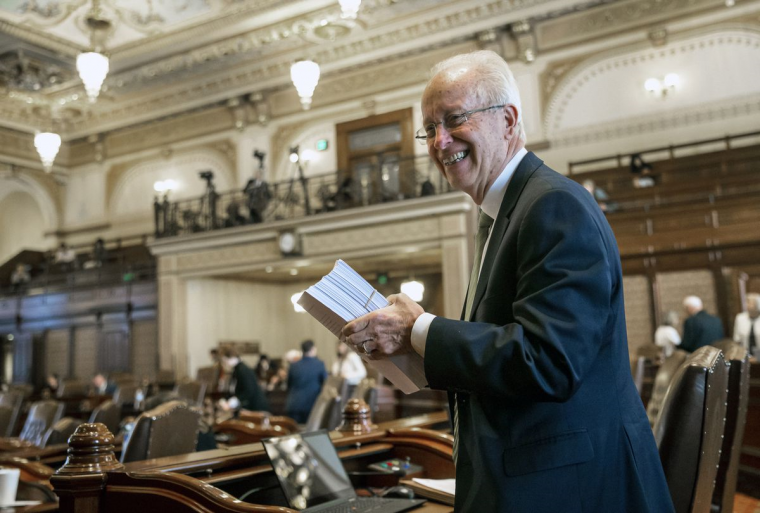 The first day of the 2019 veto session on Monday, October 28, was unlike any other that most people have ever seen.

First, we learned that State Representative Luis Arroyo (D-Chicago) had been arrested on public-corruption charges. About an hour later, federal prosecutors claimed that Representative Arroyo had attempted to bribe a State Senator, who has been cooperating with the feds since 2016.

An alleged venal criminal in the House and a government mole in the Senate. That can tend to disrupt your day.

Even so, the House Democratic caucus meeting early that afternoon was almost completely routine. House Speaker Michael Madigan went over several mundane topics with members and then finally wound up an hour later by reading a statement to his members about Representative Arroyo.

Speaker Madigan's central message was that Representative Arroyo must resign from the House or face a potential expulsion. One member of his caucus thanked him for the statement. Other than that, the meeting was routine. Members talked incessantly amongst themselves about Representative Arroyo but were mainly mum in caucus.

Things were a little different in the Senate Democratic caucus meeting. Senator Melinda Bush (D-Grayslake) angrily demanded that corrupt members should be forced out if they don't leave. Sitting in that room was Senator Tom Cullerton (D-Villa Park), who was indicted on over 40 federal counts during the summer. Senator Cullerton was reelected just last year, so he can continue attending session unless he's eventually convicted of a felony or is also expelled.

Also in that caucus meeting was Senator Terry Link (D-Waukegan). The Sun-Times and the Tribune both reported that Senator Link was the one who helped the feds sting Representative Arroyo. Senator Link, 72, the most prominent gaming-expansion supporter in the Senate, repeatedly denied being the mole and each of the newspapers relied on a single source for their stories. But the unnamed Senator said on a government recording that he was in the "twilight" of his career, his first meeting with Representative Arroyo was in Lake County, and they talked about a gaming-related bill. If it's not Senator Link, the government sure seemed to go out of its way to draw a map to his house.

Regardless, this might put a damper on Chicago Mayor Lori Lightfoot's gaming bill if Senator Link is still involved. People may be hesitant to enter a negotiating room believing that someone in the venue might be manipulating them into saying something that the FBI could interpret as a potential criminal offense.

And then there are the lazy criminals who think the only way to get things done is by bribing people. That's apparently the category that Representative Arroyo falls into, if the government transcript of his conversation with the cooperating witness is accurate and in context.

"This is, this is the jackpot," Representative Arroyo said to that unnamed Senator as he handed over the first of what he thought would be twelve $2,500 monthly checks.

Seriously? The jackpot? $2,500? That's only thirty grand over the life of the one-year bribe. Either Representative Arroyo figured the unnamed Senator was desperate for cash or that the Senator was recklessly corrupt. And "recklessly corrupt" is definitely what I would call someone who threw away their future by handing over a $2,500 check to an FBI informant.

Line 2 of the "List of Items to be Seized" in the September federal search-warrant of State Senator Martin Sandoval's Statehouse office read: "Items related to CW1, Lobbyist A, and/or Lobbyist B." CW is fed-speak for "cooperating witness."

The unnamed Senator is described in the Representative Arroyo criminal complaint as "CW1." The cooperating witness "became a source for the FBI" in 2016. The feds must have let that person off the hook for something else because the complaint says the person had to be "admonished multiple times" to report his/her involvement in any "unauthorized" illegal activity. And then the witness allegedly filed false income-tax returns and the FBI "closed" him as a source. They apparently gave the Senator an opportunity at redemption, or at least a sentence-reduction, with the Arroyo sting.

The herd mentality requires a rejection of informants. This particular informant, mole, or whatever else you want to call it, was obviously no angel. But he did help nab someone who apparently thought he could bribe a State Senator into carrying legislation to legalize sweepstakes games. There is a strong positive to what the cooperating witness accomplished here.

By the end of the week, Representative Arroyo had resigned. In his resignation letter, he practically begged his colleagues to let his district keep the pork projects he had inserted into the infrastructure program. Maybe somebody should take a look at those.