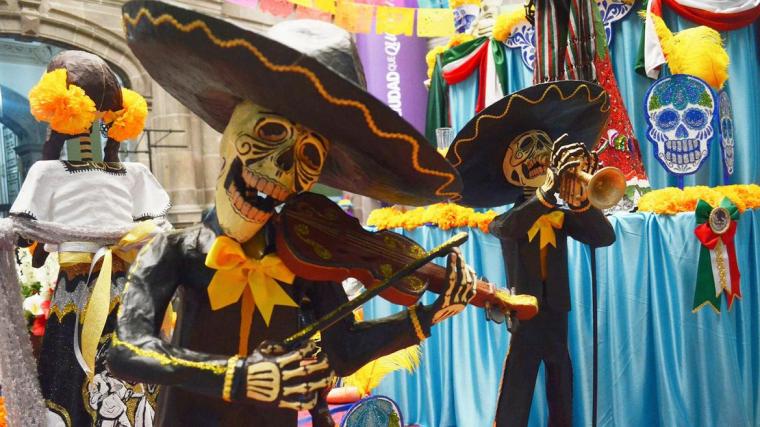 On November 1, a traditional Mexican holiday will be celebrated online – and in interactive, family-friendly style – when Davenport's Figge Art Museum hosts its Virtual Family Fiesta focused on the Day of the Dead, a chance to celebrate and remember the lives of our lost loved ones through the collective traditions, art-making, and storytelling that are among its integral elements.

The Day of the Dead is a holiday celebrated throughout Mexico – particularly in the central and southern regions – and by people of Mexican heritage elsewhere in the world. The multi-day holiday involves family and friends gathering to pray for and remember friends and family members who have died, and helping support their spiritual journeys. In Mexican culture, death is viewed as a natural part of the human cycle, and Mexicans view the day of one's passing not as a day of sadness, but as a day of celebration. In 2008, the tradition was inscribed in the Representative List of the Intangible Cultural Heritage of Humanity by the United Nations Educational, Scientific, & Cultural Organization (UNESCO), and the holiday is sometimes called Día de los Muertos in English-speaking countries – a back-translation of its original name Día de Muertos. Day of the Dead is primarily celebrated in Mexico where the day is a public holiday, and prior to Spanish colonization in the 16th Century, the celebration took place at the beginning of summer. Gradually, it was associated with October 31, November 1, and November 2 to coincide with the traditions of All Saints' Eve (Halloween), All Saints' Day, and All Souls' Day. Traditions connected with the holiday include building private altars called ofrendas, honoring the deceased using calaveras, Aztec marigolds, and favorite foods and beverages of the departed, and visiting graves with these and other possessions as gifts.

Scholars have traced the origins of the modern Day of the Dead holiday to indigenous observances dating back hundreds of years and to an Aztec festival dedicated to the goddess Mictecacihuatl, which has become a national symbol whose meaning is frequently taught in Mexico's schools. Originally, however, Day of the Dead as such was not celebrated in northern Mexico, where it was unknown until the 20th Century because its indigenous people had different traditions. The people and the church rejected it as a day related to syncretizing pagan elements with Catholic Christianity. Yet as of the early 21st Century, Día de Muertos is observed in northern Mexico because the Mexican government made it a national holiday based on educational policies from the 1960s, and Day of the Dead is now collectively viewed as a unifying national tradition based on indigenous traditions. Meanwhile, the holiday received additionally ample attention, particularly among children, when the celebration was the focus of Pixar's Oscar-winning 2017 animated smash Coco.

Registration for the November 1 Virtual Family Fiesta: Day of the Dead grants families a two-week access to the Figge's virtual lineup of videos talking about the history of the holiday, storybook readings, art activities you can make at home, recipes, discussion questions, and more! For added fun, family-activity packs are also available at the museum, with their contents including real sugar skulls to decorate at home, a model magic activity, and other special projects. For more information on the holiday event, call (563)326-7804 or visit FiggeArtMuseum.org.