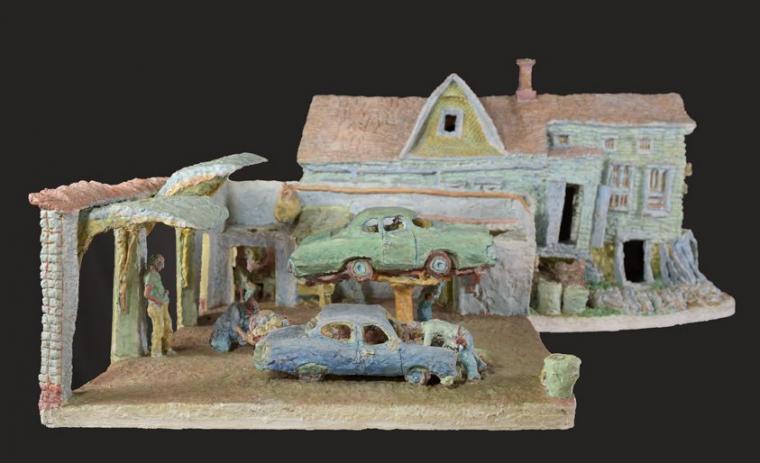 American Scene painting is a naturalist style of paintings and art particularly popular during the first half of the 20th century. The artists of the movement depicted scenes of typical American life and landscape, painted in a naturalistic, descriptive style. “American Scene” is an umbrella term for the rural American Regionalism and the urban and politically-oriented Social Realism, but its specific boundaries remain ambiguous. After World War I many United States artists rejected the modern trends stemming from the Armory Show. Instead, they chose to adopt academic realism in depicting urban and rural scenes. Much of the American scene painting conveys a nationalism and romanticism of everyday American life.

An anti-modernist style and reaction against the modern European style, American Scene painting was seen as an attempt to define a uniquely American style of art. The term does not signify an organized movement, but rather an aspect of a broad tendency for American artists to move away from abstraction and the avant-garde in the period between the two world wars. Thomas Hart Benton, John Steuart Curry, and Grant Wood were the three major representatives of Regionalism, all of whom studied art in Paris but declared their goal to create an art form that would be truly American. These artists insisted that the real solution to the many and growing problems of urban American life, made clear by the Great Depression, was for the United States to return to its agrarian roots. The art produced by the American Scene artists was ambiguous and cultivated, and it drew from diverse cultures. The choice of subjects might have attested to a quest for identity.

Some of the most prominent artists in the Figge's collection are associated with the American Scene movement, including Wood and Benton, who depicted rural communities, and artists such as Edward Hopper, who were focused on life in the city. The Figge's New American Scene features recent acquisitions by artists who examine this same subject matter through a contemporary lens, including works by Adolph Rosenblatt, Rose Frantzen, and Mark Messersmith.

The Virtual Curator Talk with Joshua Johnson is free, but advance registration is required, and participants will receive an e-mail with a Zoom link two hours before the program begins at 6:30 p.m. on November 19. New American Scene: Recent Acquisitions to the Figge Collection itself will be on display through March 7, and more information on both the exhibit and its companion events is available by calling (563)326-7804 or visiting FiggeArtMuseum.org.