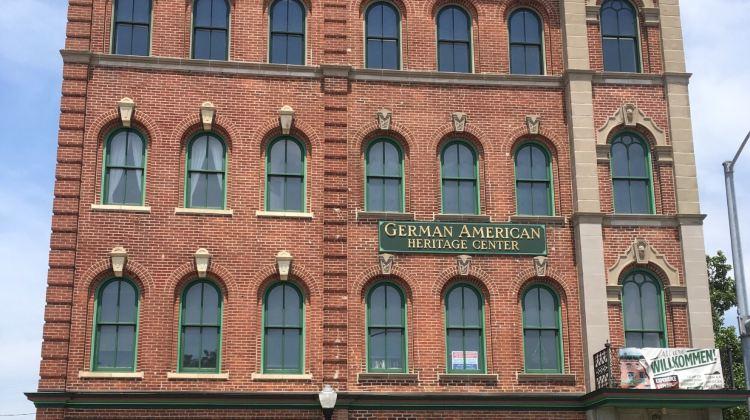 Prior to the venue's official re-opening presently scheduled for June 23, Davenport's German American Heritage Center (GAHC) will treat patrons to a live virtual guided tour on June 14, with the museum's assistant director Samantha Turner walking online guests through artifacts, photos, biographies and more in the special exhibitions Power Frauen: German Women Who Dared to Dream and The History We Hold: Highlights from the GAHC Collection.

With the year 2020 commemorating the 100th anniversary of the ratification of the 19th Amendment guaranteeing women the right to vote, the GAHC celebrates this anniversary this anniversary with the exhibit Power Frauen: German Women Who Dared to Dream. An informative and fascinating showcase of German and German-American women who left their mark on the world, Power Frauen boasts original artwork created by local female artists including Heidi Hernandez, Charlotte Drennen, Amber Williams, and Pat Beréskin. The notable German women being celebrated, meanwhile, include such notable figures as painter Gabrielle Münter, screen icon Marlene Dietrich, and actress and inventor Hedy Lamarr, with theirs and numerous other stories shared through Turner's introductions to these amazing Power Frauen.

The History We Hold exhibit, through which Turner will also guide online visitors, is described on the German American Heritage Center's Web site: “From accordions to zithers, the GAHC’s collection is varied and growing. It is from these objects that lessons from our ancestors are learned. With the memories they contain, artifacts offer a window into the past. They bring history into the present in a way that we can see, hold, and interact with. Artifacts can tell their own stories, can make connections between people, and can hold multiple meanings. They can capture a moment and turn it into a memory. They can reflect change that has happened and inspire change that will come.”

Listed on the National Register of Historic Places in 1983, the German American Heritage Center was built by John Brus and opened in 1862 as the Germania House, a gasthaus (guest house) for immigrants. In 1876, it was renamed the Miller Hotel after being bought by John Frederick Miller, a German immigrant who had been a manufacturer in the city since the 1850s, and the hotel's name was changed several additional times during the 20th century, becoming the Arcade Hotel around 1906, the Henry Blessing Boarding House around 1917, and the Standard Hotel in 1924. Since being founded as a not-for-profit cultural institution in 1994, the German American Heritage Center has evolved into a museum that includes a large permanent exhibit and two rotating special exhibits. The venue also provides educational programs, workshops, and classes relating to the German American experience and culture; assists in the coordination of festivals to foster an understanding of German American heritage; provides for cultural exchange through language classes and production of cultural presentations to the public; and partners with other heritage groups on programs, exhibits, and events.

Tickets for the German American Heritage Center's live Virtual Guided Tour of Special Exhibits on Sunday, June 14 are $8 and can be purchased through Eventbrite, with Zoom links sent to ticket-holders on Saturday, June 13. For information and to register, call (563)322-8844 or visit GAHC.org.