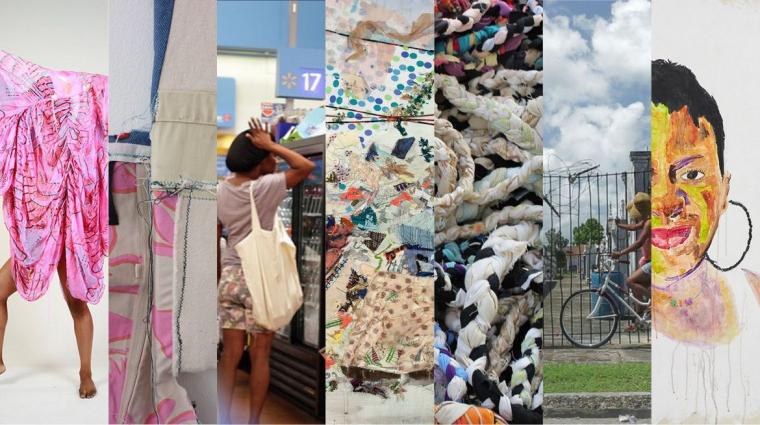 What part of yourself must you hide or bury for another to survive? This question is at the core of the Figge Art Museum's new exhibition T.J. Dedeaux-Norris Presents the Estate of Tameka Jenean Norris, an October 24 through January 31 showcase of the (living) University of Iowa assistant professor's work, and an exhibit designed to explore the complex legacy of an artist’s identity after their passing.

An American visual and performance artist, Dedeaux-Norris uses painting, sculpture, and performance art to create work about racial identity and the simultaneous visibility and invisibility of blackness through cultural appropriation in modern society. Their work critiques the presence of the black body in the history of painting and fine art, and they were listed as among “24 Artists to Watch in 2013” by Modern Painters magazine. In their art practice, Dedeaux-Norris adopts different personae including black academic artist “Tameka Jenean Norris,” and the distinction between artist and persona is frequently blurred in the resulting artworks that are simultaneously autobiographic and dramatized. Dedeaux-Norris will use their Figge exhibition to establish an artist’s estate and retrospective for recently deceased persona Tameka Jenean Norris, whose entire body of work – including fabric assemblage paintings, videos, music and works on paper – will be on view, with several performances accompanying the exhibition that celebrates the “life and death” of Tameka Jenean Norris.

Dedeaux-Norris was born in Guam and received their undergraduate degree at the University of California – Los Angeles, before graduating with an M.F.A. from Yale University School of Art in 2012. The artist has participated in numerous exhibitions and festivals including at Nasher Museum of Art at Duke University in Durham, North Carolina; the Yerba Buena Museum in San Francisco; the Prospect.3 Biennial in New Orleans; the Walker Museum in Minneapolis; the Contemporary Arts Museum Houston; and the Studio Museum in Harlem, New York. Dedeaux-Norris' works have also been highlighted at the Rotterdam Film Festival, the Sundance Film Festival, and Iowa City's Mission Creek Festival, among many others. Having participated in residencies at the Skowhegan School of Painting and Sculpture, the Fountainhead Residency, the Grant Wood Colony Fellowship, and the MacDowell Colony, Dedeaux-Norris is the 2017 recipient of a National Endowment for the Arts grant and is a tenure-track Assistant Professor at the University of Iowa.

T.J. Dedeaux-Norris Presents the Estate of Tameka Jenean Norris will be on display from October 24 through January 31, with regular museum hours 10 a.m. to 5 p.m. on Tuesdays through Saturdays, 10 a.m. to 9 p.m. on Thursdays, and noon to 5 p.m. on Sundays. Museum admission is $4-10, and more information is available by calling (563)326-7804 or visiting FiggeArtMuseum.org.